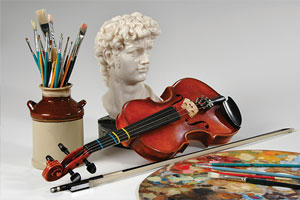 Maybe it’s because I live in New York, a city that offers daily encounters with artists from all walks of life, or perhaps it’s because I have years of songwriting and performing experience myself. Regardless of the reason, I have often sought out (mostly unsuccessfully) clinical research or counseling practices focused on the “creative population.”

In searching for a relevant bibliography and attempting to locate resources that address mental health and artists, I have found a limited number of studies, theories and clinical work examples that explain or highlight issues unique to artists, performers and other creative individuals. As might be expected, there has been the occasional study on why “artsy teens are more likely to be depressed,” such as the one published by Laura N. Young of Boston College, or how “writers are often diagnosed with bipolar disorder,” such as in a Swedish study by Simon Kyaga (both studies are from 2012). In addition, some books, such as Christopher Zara’s Tortured Artists and Barry Panter’s Creativity & Madness: Psychological Studies of Art and Artists, have attempted to draw a connection between early childhood trauma and the need for artistic expression.

Nonetheless, studies dedicated to the unique counseling needs of clients who are highly creative have received relatively little attention, either from research institutions or the mainstream media. In addition, there is often a great deal of controversy regarding whether a causal connection exists between creativity and psychopathology. This article does not attempt to prove or disprove such a connection. Rather, it aims to illustrate why, when it comes to artists who seek help for mental health concerns, a need exists to have a deeper theoretical and clinical understanding of issues involving creativity and performance. It also provides some examples that showcase the importance of establishing artists as a subgroup.

After several years of experience as a mental health counselor to the general public in a variety of settings (private, state-funded and community), I decided to narrow my focus to clients whose mental health concerns affect, or are affected by, an important component of their identities: working as visual or performing artists and/or spending a significant part of their lives devoted to creative self-expression through art. Through my encounters with these clients, I have found that artists feel more comfortable and understood when talking to someone who spends time exploring what role creative expression and the “artistic lifestyle” plays in their lives. Furthermore, these clients benefit from specific counseling interventions and approaches.

Diagnosis as an integral part of identity

I once worked with a young woman who had been diagnosed with bipolar disorder and had a history of hospitalizations. She had been on various medications over a period of four to five years and had attended numerous counseling sessions. She was also a visual and performing artist.

During the period in which I saw her, she spent most of her time designing and painting, singing in bands and brainstorming ideas for a documentary she was hoping to shoot in the near future. A mental health professional might have described her as exhibiting “racing thoughts,” “labile affect,” “increased energy” and “grandiose plans.” She struggled with her mood and anxiety and would go through periods of numbness and isolation. These were contrasted by intense, long periods of high energy, passion, creativity and dedication to her art. She was prolific, innovative and talented — very talented.

One of the primary issues that arose in our work together was her acceptance of and degree of comfort with the term bipolar disorder. She wondered out loud, “Why should I be labeled as having bipolar every time I have a burst of creativity or every time I reflect upon life’s struggles? I’m just a different and unique individual!”

Moreover, from her perspective, feeling low and depressed often seemed to provide her the creative flow necessary to bring her ideas to life through the energy boost of a manic state. In other words, we have an example of a client whose psychiatric diagnosis was an integral part of her individual identity as an artist. She did not want to eliminate “manic episodes” or work on reducing her depression or regulating her mood. Rather, she was searching for a means of integrating her “highs and lows” into her sense of self as a creative being. She needed help recognizing her emotions, making use of them and channeling them appropriately through artistic mediums to produce a result that would make her feel confident and fulfilled.

Driven by the underlying assumption that her affective experiences were valuable for her professional and artistic identity, we began to focus on observing patterns of shifting moods. If, for example, she knew that she tended to feel particularly “expansive and energetic” every three to four weeks or whenever she was approaching a performance, we would keep track and prepare for the possibility of such mood changes. We also arrived at an agreement: During those times, she would be “allowed” to work on her art by welcoming the creativity that accompanied her manic symptoms. In exchange, she would commit to maintaining a proper self-care routine, including getting adequate sleep and setting time aside to relax, following each burst of intense creative work. This way, by working with the symptoms of bipolar disorder rather than against them, she was able to experience greater Rogerian congruence between her ideal and actual selves.

Other mental health concerns pertaining to artists may result from the perceived criticisms and evaluations related to the nature of performing. One example comes from a discussion I recently had with a young woman dedicated to her work as a songwriter and recording artist. She spent countless hours producing songs and adding the right instruments and vocal lines. However, during our discussions about her work, she would downplay her talent and often end her sentences by saying, “I don’t know what I’m doing” or “Everything I do sounds terrible.”

One day, as we were discussing her general life and career goals, she reported having ruled out a future as a stage performer because of her discomfort in front of others. She stated her plan to focus exclusively on becoming a recording artist and to avoid live performances. It was obvious that low self-esteem, performance anxiety and high levels of negative self-talk were affecting this young woman and determining her creative path from the very beginning.

The goal of working with this client might be to establish and strengthen her identity as an artist and to understand why she initially chose a profession based on self-expression, only to shy away from expressing herself in front of others. A counselor might also assist her with her debilitating performance anxiety by helping her to identify and challenge automatic negative thoughts. Although such an approach would seem to encroach on cognitive behavioral territory, it still requires a counselor who can connect with the motivational drive that pushes the client to create and express.

In this particular case, the focus of the sessions was twofold. On the one hand, many of our discussions centered on meaning-making. Put simply, we explored what this client found meaningful about singing and what it would mean to her to have others hear her voice and lyrics. By looking at her performing as an extension of her personality, we worked on empowering her sense of entitlement to expose and share these personality traits.

Furthermore, it became apparent that when this client performed in front of others, she would “blank out,” panic and occasionally feel depersonalized. We quickly realized that she needed a set of easily accessible relaxation and visualization tools that she could use when her body reverted to the familiar sensation of anxiety.

A final example illustrates the difficulties that touring performers may face in forming and maintaining meaningful, long-lasting relationships. I worked with a comedian who was away from home for months at a time, traveling and meeting new people on the road, while also having to wear the mask of the “funny performer” every night. As the initial excitement wore off, he found himself feeling depressed and isolated. Of the hundreds of connections he was making with other people, few had any permanence, and none made him feel like an authentic version of himself. Although it was obvious to him that his work was contributing to his relational problems and feelings of depression, performing onstage was an essential component of his job, and he did not want to relinquish the experience of making others laugh.

In this situation, the counseling process might involve addressing feelings of depression through behavioral modification and cognitive behavior therapy, managing conflicting goals (“I choose to spend most of my time being someone else, yet I am in distress due to not being able to feel like myself”) and working on developing meaningful, albeit long-distance, relationships.

One of the goals we established was to work on the skill of “turning off” the character this client had to portray during his shows. We discussed the idea that conflicting personality traits can exist between one’s stage persona and one’s actual self, and that there is nothing wrong with that. We explored the client’s social interactions and how he might have been unintentionally presenting a character that did not accurately represent or satisfy his interpersonal needs. We then worked on recognizing which parts of himself he wanted to hold on to during his personal interactions and which parts he desired to leave onstage.

Actors may face daily rejections from auditions. Writers with depression may face creativity blocks and low motivation. Dancers and athletes may face an increased risk of eating disorders in an environment obsessed with body shape. There are many examples that speak to a need for counselors who specialize in this particular population. This is not to say that nonartists don’t experience similar problems, or that a counselor who specializes in treating anxiety cannot help an anxious writer. However, a counselor who specializes in how anxiety affects writers and other highly creative individuals will be able to effectively work with a large group of people whose mental health diagnoses may be uniquely tied to their creative and artistic identities.

Finally, many questions arise from focusing on creativity and mental illness. Do individuals with mental illnesses choose highly creative careers because of the preconceived stereotype of the “tortured artist”? Is artistic expression a form of “self-treatment” for artists? Can artist-clients better connect to counselors who understand the importance of creativity to their perception of the world? Why are there so many iconic artists with a documented history of psychiatric conditions?

I eagerly anticipate an increased interest in understanding the potentially bidirectional relationship between mental illness and creativity, as well as a greater emphasis on training counselors regarding issues commonly presented in artists and performers. By trying to understand how the creative mind works, we will open ourselves to a fascinating field with great potential for growth and to the possibility of tailoring treatment to the needs of a large and unique group of people.

Olga Gonithellis is a licensed mental health counselor who works in her private practice and a substance abuse day treatment program in New York City. She has received training in advanced creativity coaching for writers, visual artists and performers, and also received a certificate in performance psychology through the Zur Institute. In addition to her membership in the American Counseling Association, she is a member of the Performing Arts Medicine Association and the Creativity Coaching Association. Contact her at olgagonithellis@gmail.com or visit creativityandperformance.com.