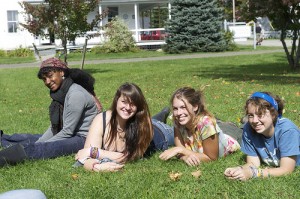 The reason that certain students excel in college while others flounder might relate back to their motivations for attending in the first place, according to a study conducted by two members of the American Counseling Association.

Doug Guiffrida and Martin Lynch, professors at the Warner School of Education at the University of Rochester, used the concept of Self-Determination Theory (SDT) to reveal that a student’s motivation for attending college is directly related to his or her level of academic success.

In their study, titled “Do Reasons for Attending College Affect Academic Outcomes? A Test of a Motivational Model From a Self-Determination Theory Perspective,” Guiffrida and Lynch, along with co-authors Andrew Wall and Darlene Abel, looked at the specific types of motivation driving students to attend college and how academically successful they are once they arrive, while also considering background factors such as socioeconomic status, gender and race.

Based on the theory, there are three primary psychological needs that, when satisfied, foster intrinsic motivation:

Guiffrida and Lynch had 2,500 college students take a web-based survey asking them to provide information about their backgrounds, GPAs and intentions to continue with their studies. The student survey-takers were also assessed on the three areas of intrinsic motivation according to SDT. All of the participants attended either a two-year community college or a four-year liberal arts college.

They found that students who were motivated through autonomy and competence had higher GPAs as well as higher intentions of staying, “which really hit the basis of theory,” Guiffrida says.

For Lynch, who has been researching SDT for many years, “some of the most unexpected findings were that there were some cases in which the links between the motivational constructs and academic outcomes were moderated by things like socioeconomic status or ethnicity. Those findings are surprising because traditionally, self-determination theory predicts that the psychological needs on which these motivational constructs are based are universal across groups. So to find that there was some moderation going on tells us to think about what these specific data are telling us.”

On a related note, Guiffrida was interested to discover the fact that autonomy was found to be a slightly more important motivator for higher-income students than low-income students. “I think it’s probably because they have a luxury of not having to worry about changing their financial situation at the end,” he says.

“They’re going to do better if they find a subject that interests them, not just something that they excel at,” Guiffrida says. “Career exploration is important.”

In addition, Guiffrida and Lynch’s study found that that altruism — the motivation to attend college in order to give back to one’s community — is a stronger motivator for students of color than for white students.

“I think it’s important to understand the link between students’ motivation for going to college and various outcomes, including academic outcomes, so that counselors can help to support optimal motivation among students,” Lynch says.

Lynch says he believes that, as a next step, “it would be important to look in greater depth at ways in which counselors, advisors and faculty members can be taught to promote more internal forms of motivation in students, not only in terms of why they go to college, but in terms of why they stay in college. In motivational terms, this is the difference between initiating a behavior and maintaining it. An important point is that, from the perspective of self-determination theory, motivation can change, in part depending on what kind of supports are in place in the social-interpersonal environment. Motivation that starts out as more external or controlled can change — it can become more internal and autonomous. The reverse can also happen: motivation that starts out as internal can become more external in nature. But a lot depends on the supports and affordances in the environment. So one next question is clearly what can counselors, advisors and faculty members do to support and promote more internal forms of motivation among the students with whom they work?”

To learn more about SDT, read Lynch’s article in the July issue of the Journal of Counseling and Development. Additional information about Guiffrida’s research examining the experiences of College Students of Color can be found in a 2010 article in the Journal of Counseling and Development, titled “The African American college student experience at predominantly white institutions: Implications for school and college counselors” (co-authored with Kathryn Douthit).