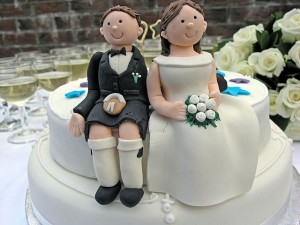 In a 2006 study at the University of Denver, Scott Stanley and his colleagues found that couples who married in a religious setting were seven times more likely to seek out premarital counseling than those who were married in secular settings. This disparity could be partially explained by the counseling requirement put forth by many clergy before they perform marriage ceremonies.

These results beg professionals to consider a few questions. How does premarital counseling differ when conducted by a religious leader vs. a counselor? And are these differences significant to a couple preparing for marriage or long-term commitment?

To start, many counselors find the term “premarital counseling” to be limiting for clients. “When I talk to people, I often called it ‘relationship education,’” explains Sara Schwarzbaum, coordinator of the family counseling program in the Counselor Education Department at Northeastern Illinois University. “We receive inquiries from people in same-sex relationships, second marriages and cohabitating couples.”

Other professionals take issue with the assumption that counseling should only occur before marriage. “I leave my door open for counseling beyond the wedding day, primarily because many issues in premarital [counseling] are discussed in the abstract,” says Tyler Rogers, who is both a pastor and a recent Ph.D. recipient in counselor education. “I find that couples’ expectations and reality never quite intersect as expected, so I find it helpful, though perhaps counter-cultural, to encourage couples to pursue some follow-up meetings beyond the honeymoon.”

For many clergy, premarital counseling is seen as a component in the construction of the actual wedding, in which they will play a public role. “I think this is a very specific experience unique to this situation and to the role of the clergy,” explains Rev. Amy Butler, senior pastor of Calvary Baptist Church in Washington, D.C. “In my mind, there are three reasons for my requirement of this process prior to conducting a wedding: to build a relationship between the couple and the minister that will allow the minister to create a meaningful wedding experience; to allow the couple some respite time from the normal conflicts and stress involved in planning a wedding; and to help the couple focus on the meaning of their commitment to each other and have an experience of counseling that will hopefully make seeking support in the future an easier task.”

Butler views the clergy influence in premarital counseling as an opportunity to encourage couples to gain courage to seek additional therapeutic support should it be required. “I recommend further work if I hear of any particularly difficult family situations, red flags around communication or other trauma that comes to the surface in the premarital counseling process. I always, without exception, talk with a couple about the healthy habit of seeking outside support when they feel they are in crisis. I also recommend they establish a relationship with a supportive therapist for regular check-ins.”

Yet some couples look for a counseling experience that is religiously neutral. “In my experience, about 30 percent of the couples who consult with me are doing so because they perceive that this will be a religion-neutral process,” explains Northeastern Illinois University’s Schwarzbaum. “They are worried that if they attend the ones at their church, synagogue, etc., they will be given religious-based information only.”

Another difference between counseling with a religious figure vs. a professional counselor is the presence or absence of the dual relationship. Unlike counselors, clergy often have the advantage of prior interactions with a couple, and therefore some familiarity of their relationship. But this intimacy also could create a level of distress when a couple discusses personal issues. “Knowing the couple makes it easier because I know the social sphere that a couple is a part of,” says Rogers, a member of the American Counseling Association, about the members of his church. “I do not usually bring my observations to them in counseling or outside [the session], but these do inform my ‘clinical gut’ and help me tease out some of the things that I may see in reality that do not present in counseling.”

Conversely, a counselor might have the advantage over clergy of not being tempted to skirt over awkward issues that might emerge in a dual relationship. “The trained counselor might have more professional knowledge about relationships and relational dynamics, as well as the interpersonal skills and sensitivity to feel areas that need special attention and push past the ‘Oh, we’ve already talked about that,’ responses that may be concealing a potentially explosive disagreement,” says Thomas Blume, associate professor of counseling at Oakland University in Rochester, Mich., and a member of ACA. “But I think we share the strength of being able to offer an outside perspective.”

Hopefully with time, research can begin to tease apart the disparities between the role of clergy and clinician in premarital counseling as well as isolate the potentially similar therapeutic elements in their work.

Until then, it is safe to assume that any environment that encourages objective thinking and open communication in a relationship will ultimately be a productive one.

Kathleen Smith is a certified rehabilitation counselor and a doctoral counseling student at George Washington University. Contact her at ak_smith@gwmail.gwu.edu.