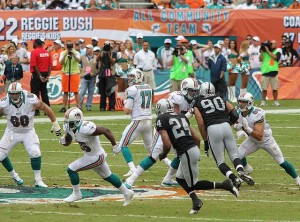 His tormenters reportedly called him “Big Weirdo.” He was sometimes ostracized, with his peers refusing to sit with him in the cafeteria.

It sounds like sad, yet typical, bullying behavior in high school or even elementary school. Yet in this case, the victim being bullied is professional football player Jonathan Martin, an offensive tackle for the Miami Dolphins who stands 6 feet 5 inches tall and weighs well over 300 pounds. And the bullies are allegedly his teammates – other grown men making salaries in the millions as players in the National Football League.

Martin left the team last week due to what was reported as an unidentified illness. It has since been learned that Martin had an emotional breakdown, the result of repetitive bullying from teammates.

Martin has since gone on an indefinite leave of absence, with reports surfacing of “threatening and racially charged” text messages from teammate Richie Incognito. Given the gravity of his actions, the Dolphins have indefinitely suspended Incognito from the team, though tales of Incognito being bullied for his weight as an adolescent add more complicated layers to the story.

While the circumstances surrounding this story have been met with both outrage and shock, licensed professional counselors have noted a rise in bullying among adult clients, with nearly half of all working Americans reporting a direct experience or witnessing bullying in the workplace. In Counseling Today’s March feature story, “Grown-up bullying,” counselors shared their experiences with adult bullying and how to help clients combat it.