Thirsty? Go to the sink and fill your glass with water. Forgot something you need for a recipe? Get in the car and head to the supermarket. Not sure which clients you are seeing today? Click and swipe your finger on your iPhone. These simple tasks are part and parcel of everyday life and the conveniences that many of us routinely take for granted.

This month, I want to share the story of Ron Miller, a man for whom I possess the utmost respect. For Ron, simple daily tasks went from something he did to what he can now only remember doing before the onset of his illness. Ron, age 46, has advanced amyotrophic lateral sclerosis (ALS), also known as Lou Gehrig’s disease, an insidious illness that over time robs the body of its ability to move, even while the person’s brain remains active. After 14 years with ALS, Ron is paralyzed from the nose down.

Ron is my hero due in part to his motto: “I may have ALS, but it does not have me.” Faced with the same circumstances, many of us might have given up and lain in bed as the disease took over. Ron decided to do what he could to fulfill a lifelong dream of returning to college to finish his degree. Thanks to eye gaze computer technology, Ron “types” by focusing on each letter or word that appears on his computer screen. In addition, Ron found an institution of higher education that would allow him to pursue his dream. Ron also has a “team” of professionals who support his academic, health and daily living needs — another group of my heroes who have helped him in his quest. 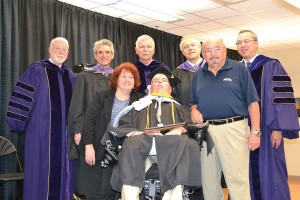 This past December, Ron completed the requirements to obtain his associate degree. It would have been virtually impossible for Ron to attend a traditional graduation ceremony, especially since he was earning his degree from Excelsior College, an institution chartered in Albany, N.Y., by the New York State Board of Regents. For more than 40 years, the college has been dedicated to helping the post-traditional adult student. Given its unique ability to help adults from all walks of life realize their academic goals, the college’s staff and leadership were committed to providing Ron with the graduation experience.

So, in early January, key staff of Excelsior, as well as its president and chair of its board of trustees, went to Norfolk, Va., where Ron is a resident at Lake Taylor Transitional Care Hospital. There, commencement was convened, and Ron was awarded his degree. As the immediate past chair of Excelsior’s board of trustees, I had the privilege of attending the ceremony. I had been following Ron’s academic progress for a number of years, and was so happy to learn he had overcome all the obstacles he faced to obtain his diploma. As I said in my remarks at the ceremony, he really did earn this degree (and, truth be told, probably worked harder and under much greater adversity than most people).

It is this type of human spirit and enduring will that leave me in awe. Perhaps you know of clients or students who have overcome serious hardship. Or, to paraphrase Thoreau, those who have advanced confidently in the direction of their dreams to live the life they imagined, to meet with a success unexpected in common hours.

Ron Miller has met with the success referred to by Thoreau. However, Ron is not one to rest on his “academic” laurels; he is now pursuing his bachelor’s degree. I look forward to Ron taking on this next challenge because I want to return to Norfolk, attend his next commencement and personally congratulate him for his accomplishment.

If you would like to learn more about ALS, visit alsa.org.

As always, I look forward to your comments, questions and thoughts. Feel free to contact me at 800.347.6647 ext. 231 or via email at ryep@counseling.org. You can also follow me on Twitter:
@RichYep.