Once a month, volunteers take to the streets of Orlando, Fla., to hand out oranges and a kind word to downtown shoppers, businesspeople and other passersby.

The program, dubbed “Orange You Happy,” is part of the Mental Health Association of Central Florida’s (MHACF) focus on suicide prevention.

The roughly 30 volunteers – many of whom are MHACF interns who work the association’s mental health referral hotline – chat with people and hand out oranges with a card containing MHACF’s contact information. 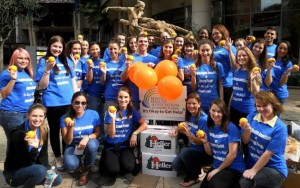 Volunteers at MHACF’s “Orange You Happy” event in February.

“It’s a real feel-good thing, trying to make people happy and let them know if they’re not, they can come and see us,” says Crawford. “It’s really about bringing a little light to somebody’s life.”

Volunteers usually give away 600 oranges in two hours during the monthly handout, says Crawford. A local grower, Heller Brothers Citrus of Winter Garden, donates the fruit.

MHACF is an independent association based in Orlando. Established in 1946, the nonprofit runs an extensive client/patient referral service and hotline, as well as a free clinic for anxiety and depression for residents of Orange County in central Florida. The organization also pairs volunteer guardians with people who have been involuntarily hospitalized for mental health reasons and don’t have a guardian otherwise.

With a slogan of “It’s OK to get help!” MHACF focuses on anxiety, depression and suicide prevention, says Crawford.

MHACF works with and refers clients to a network of more than 1,000 counselors and other mental health professionals, Crawford says. In addition, MHACF refers all of its clinic clients to group and individual counseling sessions.

Crawford says MHACF sees a slight increase in calls to its hotline after each month’s Orange You Happy handout. The organization does not ask callers how they were referred to the hotline, so she acknowledges it is hard to draw a definite corollary between the handout and the number of calls received.

In general, the project spreads awareness of MHACF and its services. It’s also a nice change of pace for the interns, who hear a lot of difficult stories when working the MHACF hotline, says Crawford.

“It’s good for the people we encounter, and it’s good for our volunteers,” she says. “We try to get everybody to smile. We’ve pretty much been able to do that.”

The Orange You Happy project was started as MHACF looked to extend its focus on suicide prevention. Crawford says the organization got the idea from a similar program in Boston where volunteers handed out oranges at subway stations.

The project seemed to be a natural fit because, as Crawford points out with a chuckle, “We’re in the orange capital of the country, practically.”

Working in pairs and wearing blue MHACF T-shirts, the Orange You Happy volunteers circulate throughout downtown Orlando, especially the appropriately named Orange Avenue in the center of town.

“We don’t ask people for anything” such as a donation, Crawford says. “We just offer them an orange and a big smile.”

The program is growing in popularity, and MHACF even ran out of T-shirts because so many people wanted to volunteer, Crawford says.

For more information on the Mental Health Association of Central Florida, see mhacf.org

Check out ACA’s 2014 Counseling Awareness Month page for information and tools to help spread awareness of the good work counselors do: counseling.org/about-us/counseling-awareness-month