Is the National Football League ready for an openly gay player? What about society at large?

Many in the media have been raising these questions since University of Missouri football star and NFL prospect Michael Sam “came out” in interviews this winter. 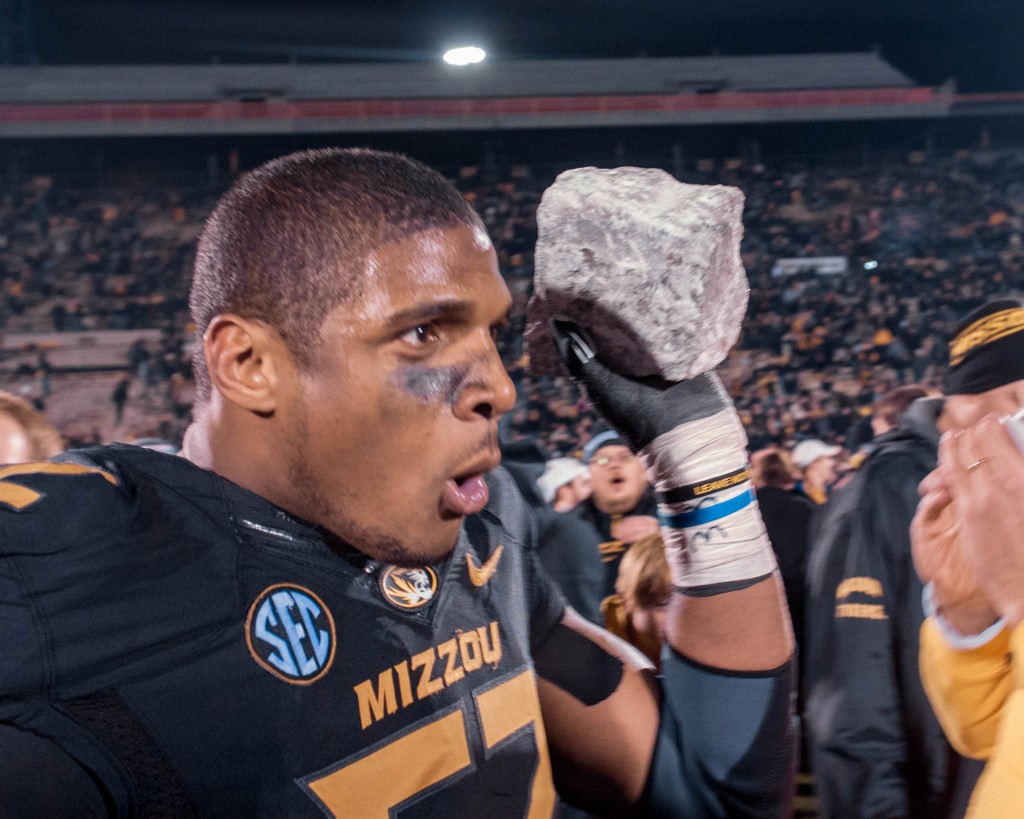 Michael Sam on the football field in 2013. Image via Wikimedia Commons

The defensive lineman from Hitchcock, Texas, had told his Mizzou teammates about his sexual orientation last year. He came out to the wider public in interviews with the New York Times and ESPN in early February.

The announcement made waves because Sam is said to be the first athlete to come out as gay before securing a job with an NFL team.

The ripple effect of Sam’s announcement will be felt across professional sports, certainly, but also down through youth sports and the counseling profession itself, say Taunya Tinsley and Hugh Crethar.

Crethar, an associate professor of counseling at Oklahoma State University, is president of the Association for Lesbian, Gay, Bisexual and Transgender Issues in Counseling, a division of the American Counseling Association. Tinsley, a licensed professional counselor and assistant professor at California University of Pennsylvania, helped to found and facilitates ACA’s Sports Counseling Interest Network.

Sam, a Missouri senior, led his team to a win this year at the Cotton Bowl.  He was a first-team All-American and was voted Missouri’s most valuable player by his teammates. He is widely regarded as a professional prospect, but draft experts have questioned whether his revelation will hurt his stock in the upcoming NFL draft.

Jason Collins, who plays in the National Basketball Association, became the first active male professional athlete in a major American team sport to publicly come out as gay in spring of 2013.

Q+A: When athletes comes out

Do you see Michael Sam’s “coming out” having an impact on professional sports, and even youth and school sports or lesbian, gay, bisexual and transgender (LGBT) issues?

Tinsley: Absolutely! It has been said that “sport permeates all aspects of society and that even a person with very little interest in sport will interact with it in some way.” Additionally, the sporting environment is a microcosm of our society and, vice versa, society is reflective of the sporting environment. Gary Sailes and Louis Harrison (Sailes, G. & Harrison, L. Jr. (2008). Social issues of sport. In (A. Leslie-Toogood & E. Gill (Eds.), Advising student athletes. Monograph Series Number 18, National Academic Advising Association) state, “while racism, sexism, cheating, commercialism, education, socialization (among other factors) exist in society, they also exist in sport. People in society are the same individuals who make up sport. It is logical to assume that they bring the same values, culture and behavior to sport [including youth, K-12, college and professional sports] that they exhibit outside of sport.” Thus, it is important that those who work with the athlete population become knowledgeable of their specific needs, serve as support systems, develop culturally appropriate preventative programs and services as well as interventions, and engage in open and honest dialogue with the diversity of constituents within the athletic environment.

Crethar: Like others who have come before — such as Jackie Robinson as the first black Major League Baseball player; Fritz Pollard and Bobby Marshall, the first black players in the NFL; Jason Collins as the first openly gay player in the NBA; and Brittany Griner, the first openly lesbian player of the WNBA, Michael Sam continues the tradition of breaking ground for the acceptance of diversity in sports as well as the embracing of affectional diversity in our society.

How might it affect the work sports counselors do?

Tinsley: It does not just affect the work that sports counselors do but all professional counselors.  The athlete population has not always been considered a specific and diverse cultural group, which means the training for this population has been challenged, lacking or deficient. However, by extending the principles of multicultural counseling (i.e., self-awareness, worldview knowledge, culturally appropriate skills, techniques and interventions and the ability to develop a cross-cultural therapeutic relationship) to include the athlete population, professional counselors may be in a better position to receive formalized instruction beyond the basic counselor preparation.  Additionally, counselors may also be in a better position to respond to the developmental needs of the athlete population, including the diversity within the athlete culture, as well as enhance their skills and services that they provide. Furthermore, this provides a further rationale of the importance of integrating a social justice perspective in our work as counselors.

What are your thoughts, from a counseling perspective?

Tinsley: Although Michael Sam had already come out to himself and to his teammates at the University of Missouri, I think it is great that he had the courage and is proud enough, as well as strong enough emotionally, to come out as gay in the media networks. From a counseling perspective, we know that the consequences of identity confusion and internalized homophobia may include low self-esteem, self-hatred, anxiety, depression and other mental health issues. Additionally, we know from research and the literature that the coming-out process happens when individuals who identify as gay or lesbian come to accept being gay or lesbian as an important aspect of their [multiple] identity. Based on Michael Sam coming out to the media, in addition to himself and his college teammates, one could surmise that he has transitioned to identity synthesis.

However, from a counseling perspective, I do get concerned [about] the prejudice, oppression and/or discrimination Michael Sam may face based on being an African American gay man in a high-profile sport. Athletes as a whole have to face prejudice and have been a group that has been oppressed and discriminated against. And within the athlete culture, individuals will also face heterosexism, sexism and racism — to name a few that Michael Sam will not be immune from.

Crethar: I see the brave, pioneering and important step that Michael Sam has taken in coming out as … key to highlighting an issue of the need to continue battling for equitable treatment of all people in our society. Sam’s announcement comes at a time when views on homosexuality and same-sex marriage have been undergoing huge changes of their own. In the past decade, 16 U.S. states and the District of Columbia have allowed same-sex marriage, including seven in 2013 alone. For the first time last year, a majority of Americans (51 percent) said they favored same-sex marriage, according to a Pew survey. As counseling professionals, we need to understand that life contexts are key variables in the ethical treatment of all those we serve. It is therefore imperative that all counselors stand for equitable access to rights and privileges of people of all affectional orientations.

What positives and what negatives might come out of this announcement, for society and for Michael Sam?

Tinsley: The positives that have come out from this announcement is the identification of individuals and groups who exhibit genuine, nonjudgmental and empathic approaches and behaviors. Additional positives include an outpouring of the ethic of love and acceptance of Michael Sam as a person from both heterosexual individuals and individuals who identify as gay and lesbian.

As stated above, the negative that may come out, and has already come out, is the negative messages, prejudice, oppression and discrimination from a portion of our homophobic society.

Crethar: When [college football’s] Southeastern Conference Defensive Lineman of the Year Michael Sam made the public announcement that he is gay, it was met with immediate and positive response that was nearly universal. Numerous teammates from the University of Missouri, leadership within his university, a number of NFL players and the head of the NFL Players Association all shared public support of Sam’s choice to come out, as well as emphasized his welcome amongst NFL players. The only real exception to the warm response came from anonymous coaches, scouts and general managers. Sam’s case is a clear reminder that despite rapidly advancing cultural acceptance of diversity in affectional orientation, workplace bigotry continues to endure. This highlights the need for a federal employment nondiscrimination act to be passed. A large majority of Americans believe lesbians and gays face between “some” and “a lot” of discrimination in the workplace (Pew Research Center).

Michael Sam’s choice to enter the draft openly gay does break ground by directly and publicly confronting and highlighting the ongoing existence of workplace discrimination for people of varying affectional orientation. With the rapid advance of marriage equality in the U.S. and around the globe, it isn’t shocking that a segment of our society continues to focus on how Sam’s orientation will purportedly disturb “the heartbeat of the locker room,” cause “distractions” for his team and even may not be “manly enough” for a football player. Sam’s strong and effective play on the football field and with his team who had known of his orientation for a year negate these opinions.

Bethany Bray is a staff writer for Counseling Today. Contact her at bbray@counseling.org.