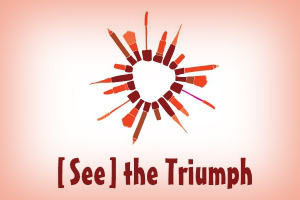 While surveying survivors of domestic violence for a recent research project, Allison Crowe and Christine Murray were thoroughly compelled by the stories they heard. So much so that they knew the stories should be shared with a wider audience rather than limited to publication in an academic journal.

In one case, an interviewee said she was fired because her employer didn’t want her abusive spouse showing up at the workplace to stalk her. In another case, a police officer asked a victim of domestic violence out on a date when she came to the station to file a report. Another participant said her doctor told her she was “stupid” for not leaving an abusive husband.

Crowe and Murray, counselor educators and American Counseling Association members who focus on domestic violence and family counseling, launched the “See the Triumph” campaign in January 2013.

While they still plan to publish their research — their article is currently undergoing peer review at a journal – the duo is putting much of their effort into managing a website and social media campaign to share their research findings and spread awareness of the complicated issues and stigma that surround domestic violence.

The project title, “See the Triumph,” is part of a quote from one of their interviewees, who spoke of the triumph of surviving abuse and starting life over.

“The stories that we heard were overwhelming,” says Crowe, an assistant professor of counseling at East Carolina University, a licensed professional counselor and an approved clinical supervisor. “I was taken aback by the poignancy of what these [people] experienced. When someone sees you as ‘she lets her husband beat her,’ people start forming ideas about you.”

Crowe and Murray surveyed more than 230 men and women for their research.

They believe the website and social media campaign offer more timely and immediate ways of sharing their data, while also allowing them to reach a wider population than those who read professional or academic journals.

“We had the data and felt like we needed to do more with it,” Crowe says. “We decided to spread the results in an innovative, nontraditional way. … We wanted to reach more people.”

Seethetriumph.org hosts a blog written by Crowe, Murray and guest bloggers. It also contains a plethora of information and links to resources about domestic violence, such as a “checklist” of questions domestic violence survivors can ask their potential counselors to see if they are properly trained to deal with such a complicated and nuanced issue.

Through their research, the duo has found that domestic violence survivors want –- sometimes even crave the chance — to “share their stories,” says Murray, an associate professor in the University of North Carolina at Greensboro (UNCG) Department of Counseling and Educational Development.

Participants felt validated by talking about what they had been through, says Murray, a licensed professional counselor and licensed marriage and family therapist.

Additionally, some interviewees felt sharing what they had been through and overcome could help others who were still experiencing domestic violence, says Crowe.

“An incredible takeaway is how [survivors] want to help each other,” she says. “Their enthusiasm and passion for helping each other [and] doing what they can was really mind-blowing.”

Crowe and Murray continue to accept survivor narratives through a survey at seethetriumph.org. They are also launching another round of research focusing on immigrants’ perceptions of domestic violence, stigma and culture. A survey for first- and second-generation immigrants is posted on the See the Triumph home page.

Crowe and Murray’s research project began as an exploration of the term “stigma” and its connection to domestic violence.

The duo conducted face-to-face interviews with domestic violence survivors about the stigma they experienced in general society as well as at the hands of professional helpers such as police officers, lawyers, medical personnel, mental health workers and others. Crowe and Murray spoke with 12 women, conducting hourlong interviews with each.

The interviews were poignant, says Crowe, and confirmed that many domestic violence survivors do experience stigma, such as the woman who was asked out on a date by the police officer she turned to for help.

Crowe and Murray then expanded their research, surveying more than 200 men and women in the United States and internationally who had experienced domestic violence. For this second round of research, they conducted an online survey with open-ended questions about stigma.

In case after case, interviewees talked of experiencing stigma, from the assumptions people made, such as the belief that abuse victims somehow invite or bring the abuse upon themselves, to a religious leader who told a victim it was her responsibility to keep her marriage to an abusive spouse together at all costs.

“Our results confirmed what we felt in the first round,” Crowe says. “Those results were unfortunate, but very important to us.”

The duo launched Seethetriumph.org and their social media campaign last year after receiving approval from their universities’ research boards.

“One really surprising and rewarding part of this has been the ability to be a part of someone’s healing,” says Crowe. “[The fact] that they can use this as a vehicle for healing is incredible. I think the role of advocate has really been brought out in me and Christine.”

“Finding a counselor who is competent to serve survivors”

“Five things I wish I had known when I left”

“Being a victim, being a survivor and triumphing: The words that describe our experiences”

“Intimate partner violence affects everybody, even you”

See the April issue of Counseling Today for an in-depth feature article on counseling victims, survivors and perpetrators of domestic violence, to which Crowe and Murray contributed.