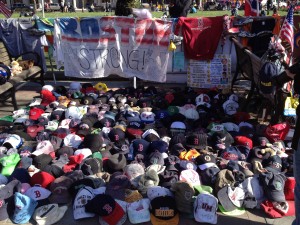 A temporary memorial, where people hung running shoes, flowers, notes and other mementos, went up at the Boston Marathon finish line within hours of last year’s bombing. Photo courtesy of Michael Kocet

The Boston Marathon’s 26.2 mile course can be a metaphor for what the city has been through over the past year: a long, winding stretch of ups and downs, heartbreak and triumph.

Today, April 21, thousands of runners return to finish the race that was halted unexpectedly and tragically one year ago, when two bombs went off at the finish line, killing three people and injuring more than 260.

Returning to the scene of last year’s trauma will have many mental health implications, not only for the runners but the spectators, local residents and those watching on television, far and wide.

Boston’s Public Health Commission has organized a series of free, drop-in counseling sessions this month for anyone feeling anxious about the one-year anniversary.

While hundreds were injured at last years marathon, the invisible injuries go far beyond those who were physically at the race, says Anthony Centore, a licensed mental health counselor (LMHC) and licensed professional counselor (LPC) with a practice in Boston.

“It’s a difficult week, but the people of Boston are tough. They were tough right after the bombing, and they’re tough now,” says Centore, an American Counseling Association (ACA) member. “This week, some people are angry, many are mourning and others are reflecting on the challenges they’ve overcome over the last year. There is a sense of unity here, and also a desire to show the world that Bostonians won’t be defeated by a terrorist act.”

Several days after last year’s marathon, a large portion of Boston (an area that is home to nearly one million people) was put into a “shelter in place” lockdown as the authorities conducted a massive manhunt for the bombing suspects. Neighborhoods were jolted awake as the suspects threw explosives and fired at police from their vehicle.

In the wake of this extended trauma, Centore’s practice offered free counseling “to anyone who needed it” after last year’s marathon, he says.

“Three persons were killed and an estimated 264 others were physically injured during the bombing. However, the ripple effect, of course, goes much farther,” says Centore. “The physical and psychological recovery of some of the injured may take years. Also, some persons near the finish line were physically unharmed but traumatized by what occurred. Families have been working to find a new normal, and put their lives back together. And there are others who have experienced a secondary trauma, or for whom the bombing triggered a past trauma.”

Boston-area LMHC Michael Kocet uses the words resilience, solidarity and hopeful to describe the city’s emotions through the past year.

Kocet, an ACA member and associate professor in the department of counselor education at Bridgewater State University, says he’s seen “a lot of selflessness” and “boundless compassion” in the wake of last years trauma.

A temporary memorial, where people hung running shoes, flowers, notes and other mementos, went up at the finish line within hours of the bombing. There are still signs with the “Boston Strong” motto in shop windows everywhere you look, Kocet says.

“It’s not something, collectively, you get over,” says Kocet. “… Boston has a reputation for having a tough exterior, [and] we’re an incredibly resilient city.”

Kocet and Centore both said Boston’s ongoing recovery – both physical and psychological — is a testament to the strength of the human spirit.

“I think [the recovery] is a testament to how resilient the human spirit can be, and to how strong the people of Boston are,” says Centore. 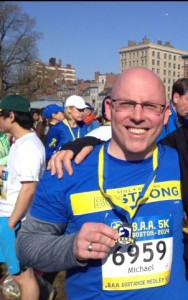 Kocet, who recently started running, ran the Boston Athletic Association’s 5K on April 19, which is the same organization that manages the marathon.

Through running, Kocet says he’s come to realize the emotional and psychological connections people make through running – from the cause they’re running for (often fundraising for a charity) to the competition against themselves, to run a faster time.

“I can appreciate how races play a special role in people’s lives,” he says. “The races people chose to run can carry a deep meaning, an emotional connection.”

The marathon can be a metaphor for life, says Kocet. Not only does is it require personal determination, resilience and goal setting, but the need for encouragement and support from spectators on the sidelines.

“Everybody has a journey that they’re running (and) striving toward goals,” he says.

“Watching people cross the (Boston Marathon) finish line, it’s emotional, even as a spectator. I equate it as kind of a spiritual experience, a personal accomplishment,” he says. “… Crossing that finish line (this year) will be even more sweet because of everything that has happened.”

Counseling Today article from one year ago, “The mental health effects of sheltering in place”

Q+A with two Boston University professors: What impact did the Boston Marathon bombing have on children?