The above is not an excerpt from a political speech. It is not a suggestion from a more liberal-minded counselor. It is not a tagline from a book. It is Standard C.5., titled “Nondiscrimination,” of the ACA Code of Ethics. As licensed professional counselors (LPCs), we agree to this statement as part of our practice.

Recently, counselors, activists and others gathered for the first Human Rights Campaign Time to Thrive Conference to promote inclusion and safety for LGBTQ youth. The past year has seen several states adopt same-sex marriage laws or overturn outdated bans, including a ruling by a federal judge in my own state of Texas. LGBTQ allies are standing up for equality all across the country. Our ACA president, Cirecie West-Olatunji, sent a letter to Arizona Gov. Jan Brewer in late February asking her to veto legislation that would have allowed LPCs to refuse treatment to members of the LGBTQ community based on a counselor’s religious values. 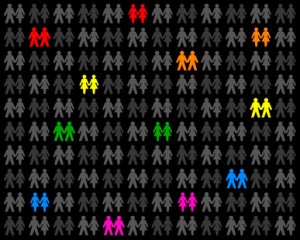 Of the many theories and ideas I learned in graduate school, a belief in equality is one that guides me not only as a new professional, but also as a citizen of the world. I thought that other counselors shared in this conviction, but I was recently proved wrong.

Shortly before I graduated my master’s program, I attended a training approved for CEUs on marriage and family therapy at a faith-based counseling agency. I was pursuing a job that was offered to me as an LPC-intern, and this training was a requirement for me to qualify for the position.

The training presented a relational model to help couples remove pain and condemnation from past and present relationships in an effort to feel deeper love and connection with one another. Because I believe we are relational beings and I agree that pain caused by one person can get projected onto other relationships, I began the first hour of the workshop wearing some thick rose-colored glasses.

The presenter reiterated that these principles were biblically based, but applied to anyone. I am a practicing Episcopalian, but I was concerned about the plethora of biblical passages quoted throughout the workshop manual. I thought these passages might invite a counselor to impose values onto a client, thereby limiting the therapy’s use with diverse populations. But like I do in every session with my clients, I sought to view the training from the presenters’ perspective, enter their world and see what their model was about.

I learned this model was built on how a husband and wife can love each other better as Jesus Christ would want. There were breakout sessions on applying the therapy to single adults and married couples experiencing infidelity, but that was the breadth of the diversity presented. There were no examples of divorced couples, cohabiting couples, newly bereaved widows or widowers, single parents or same-sex couples. I started questioning the motivation behind this therapy. At the end of the first day of the workshop, we were asked to write any questions we had on a note card. Questions were to be answered the following day. So, I began jotting down some thoughts.

At the end of that second day, I asked how to apply this model to single parents, or to the newly bereaved or with same-sex couples. And I asked if the agency where the training was being held saw same-sex couples that might want to strengthen their relationship with each other and with God or their higher power.

The presenter took quite a few deep breaths before answering. He started off by saying that he couldn’t see why this model couldn’t be applied to same-sex couples. I breathed a sigh of relief. But then he continued his answer. For him, individuals “choosing” to act on those “kinds of urges” would not be seen at his agency. In fact, he said, he had a lesbian couple come to him once, but he referred them out because he was “not an expert on that kind of thing.” However, he said, he also had a client who told him he was having thoughts and urges about having a same-sex relationship. The presenter continued to talk about how he most certainly helped that client rid himself of those “kinds of sins.”

ACA’s website states that “the belief that same-sex attraction and behavior is abnormal and in need of treatment is in opposition to the position taken by national mental health organizations, including ACA.” Conversion or reparative Therapy is a deplorable practice that approaches same-sex attraction as a mental disorder and attempts to change the client’s sexual orientation. What this presenter seemed to state was that he practices conversion therapy.

When our clients hold a discriminatory belief, we are obligated to respect them, but it becomes a totally different issue when professional counselors conduct therapy with a biased and discriminatory mindset. Professional counselors are in a position of power, and with power comes the possibility of causing serious harm. Putting the word Christian in front of your title as a licensed counselor does not give one free rein to impose values. While someone may feel it is just to pick and choose what parts of the Bible to quote as fuel for hatred, choosing bits and pieces of the ACA Code of Ethics is not an option. Licensed professionals must uphold ethical standards.

After the training, I talked to the supervisor at the agency where I was pursuing the job. She told me that there is a “real world” and the world I was taught in graduate school, that the two are different, and that her agency would likely hold the views of the presenter at the training. Needless to say, I didn’t take the job.

When we choose to simply accept this cynicism and hate as a reality, we are not being true to our five moral principles as prescribed by Kitchener — autonomy, nonmaleficence, beneficence, justice and fidelity. We are also not being true to our Rogerian foundation of providing our clients with unconditional positive regard.

Professional counselors must work to uphold our ethical standards to promote the best care for our clients and work against discrimination. By not standing up to other counselors who are holding these discriminatory views, we as a profession are contributing to the oppression of the LGBTQ community. We cannot just say that our code of ethics aims for multicultural competence; we must act on this. If our profession is going to attain the respect and value it deserves, we must as members of ACA truly “[embrace] a multicultural approach in support of the worth, dignity, potential and uniqueness of people within their social and cultural contexts,” as the preamble to the ACA Code of Ethics states.

When we become counselors, we are agreeing to constantly re-evaluate our own views, avoid imposing our beliefs onto our clients and expand our own self-awareness. This reevaluation of ourselves as counselors should be a never-ending process. Putting faith-based, biblically based or Christian in front of the title counselor doesn’t warrant that process to stop, nor does it entitle the counselor to discriminate.

Quinn K. Smelser, a national certified counselor and licensed professional counselor-intern, is a counselor in Austin, Texas, and a graduate of Texas State University and the University of Texas at Austin. She counsels families and at-risk youth in central Texas.  She is also a member of the Human Rights Campaign’s Federal Club and the Austin-area gala committee. Contact her at qksmelser@gmail.com.