Maya Angelou, noted poet, author and inspiration to many counselors, passed away today at age 86. 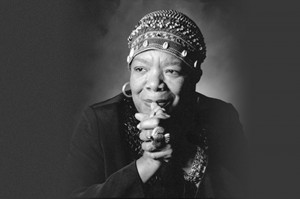 “I still remember her ACA conference keynote more than 17 years later,” says ACA Chief Professional Officer David Kaplan, a past president of the association. “Her poetry was enthralling and her passion made you feel as if you were the only one in the room – even though you were surrounded by thousands. It was the most memorable ACA keynote I have ever witnessed and her passing makes me sad that others will not have the opportunity to hear her speak in person.”

An article in the May 1997 issue of Counseling Today describes Angelou’s keynote address at the ACA conference as “brilliant and moving.”

More than 5,000 people attended. She concluded the hourlong speech by reciting her poem “A Brave and Startling Truth,” which was met with a standing ovation. (The poem is included at the bottom of this article.)

“Angelou lifted the spirits of all who were lucky enough to attend,” states the article. “… [She] lauded the exquisite power of counselors, saying ‘you are the best we are, and the best we can hope to be.’”

All people must support each other and teach love, and that is what counselors do, Angelou told the audience.

Angelou grew up in Jim Crow-era Arkansas, which she chronicled in her landmark 1969 book I Know Why the Caged Bird Sings.

Angelou wrote more than 30 books during her lifetime and won three Grammy awards for spoken-word albums. She also directed, wrote and acted in movies, plays and television programs and was a lecturer, dancer, singer and civil rights activist.

Rebecca Daniel-Burke, a counselor and ACA’s director of professional development, said Angelou has been an inspiration to her and she, in turn, has used Angelou’s writings to inspire her counseling clients.

“When I was 25 years old, I lived in Manhattan. I went to the New York Public Library and made a decision to read all of the autobiographies written by women,” Daniel-Burke says. “When I got to I Know Why the Caged Bird Sings, I was in for a treat. Later in life I became a counselor and started giving my clients inspiring poems. One I have given to many women is ‘Still I Rise.’ [Angelou] has provided inspiration to me, my clients and infinite numbers of women.”

In her last tweet on May 23, Angelou said, “Listen to yourself and in that quietude, you might hear the voice of God.”

“I have two very distinct memories of Maya Angelou. The first is when I was in high school and was assigned to read I Know Why the Caged Bird Sings. Even at that young age, I was moved and still remember the impact that her biography had on me. She was a woman of such inner strength and fortitude.

The other memory I have was in 1997 when Dr. Angelou accepted ACA’s invitation to be our keynote speaker at the annual conference. The contract from the speaker’s bureau was very clear that we were to meet her plane when it arrived and that staff was to follow her in a separate car to the hotel.

We made sure she got into the limo and headed to the other car when she asked what we were doing. When told that we would be in a different car, she said that was nonsense and that we were to ride with her! On the ride to the hotel, she was engaging, asked about our life and our careers, and made us feel so comfortable. When she went to the stage to present her keynote, she even referred to those of us who met her at the airport by name. Gracious, welcoming and a very unique woman.”

Counselors, how have Maya Angelou’s life and writings inspired you?

Scroll down to post your thoughts and memories of her legacy and impact on the counseling profession.

A Brave and Startling Truth

We, this people, on a small and lonely planet
Traveling through casual space
Past aloof stars, across the way of indifferent suns
To a destination where all signs tell us
It is possible and imperative that we learn
A brave and startling truth

When the rapacious storming of the churches
The screaming racket in the temples have ceased
When the pennants are waving gaily
When the banners of the world tremble
Stoutly in the good, clean breeze

Nor the Danube, flowing its blue soul into Europe
Not the sacred peak of Mount Fuji
Stretching to the Rising Sun
Neither Father Amazon nor Mother Mississippi who, without favor,
Nurture all creatures in the depths and on the shores
These are not the only wonders of the world

When we come to it
We, this people, on this minuscule and kithless globe
Who reach daily for the bomb, the blade and the dagger
Yet who petition in the dark for tokens of peace
We, this people on this mote of matter
In whose mouths abide cankerous words
Which challenge our very existence
Yet out of those same mouths
Come songs of such exquisite sweetness
That the heart falters in its labor
And the body is quieted into awe

We, this people, on this small and drifting planet
Whose hands can strike with such abandon
That in a twinkling, life is sapped from the living
Yet those same hands can touch with such healing, irresistible tenderness
That the haughty neck is happy to bow
And the proud back is glad to bend
Out of such chaos, of such contradiction
We learn that we are neither devils nor divines

When we come to it
We, this people, on this wayward, floating body
Created on this earth, of this earth
Have the power to fashion for this earth
A climate where every man and every woman
Can live freely without sanctimonious piety
Without crippling fear

When we come to it
We must confess that we are the possible
We are the miraculous, the true wonder of this world
That is when, and only when
We come to it.