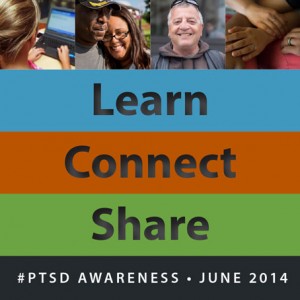 “PTSD is a very normal response to a very abnormal experience,” says Sheade, a licensed professional counselor (LPC) who runs an equine-assisted therapy program in Texas. “There’s nothing wrong with [people with PTSD]. This is how we would expect somebody to react to a traumatic event.”

About 3.6 percent of U.S. adults ages 18- 54 (or approximately 5.2 million people) present with PTSD during the course of a given year. Prevalence is higher among women and deployed military personnel.

June is PTSD Awareness Month, and the National Center for PTSD has spent the past four weeks focusing on spreading public awareness and promoting understanding of the disorder.

According to the National Center for PTSD, it is normal to have post-trauma stress reactions such as upsetting memories of the event, increased jumpiness or trouble sleeping. A person should seek help if these symptoms get worse or do not go away over time.

PTSD is a complicated, multifaceted disorder that affects not only those who suffer from it, but also those close to them.

The good news is that counselors are well-trained to help, says Carlos Zalaquett, a counseling professor at the University of South Florida who has counseled people affected by trauma, including victims of violence and political unrest in his native Chile, for three decades.

A variety of evidence-based treatments have been shown to help those with PTSD, says Zalaquett, from trauma-focused cognitive behavior therapy to eye movement desensitization and reprocessing (EMDR).

“I feel that we’ll see more and more veterans who need help and support for PTSD. As counselors, we need to be prepared to help them,” says Sheade.

Sheade, a registered play therapist and national certified counselor, often uses horses in her treatment of clients, from children to veterans of the Vietnam War, regardless of whether they have PTSD.

Numerous relationship and trust issues are common in those with PTSD, says Sheade. Through equine-assisted therapy, the horse — a gentle and nonjudgmental companion — can help these clients take a first step in connecting with others again.

In addition to social anxiety and trouble with relationships, those with PTSD can develop depression, substance abuse, sleep disorders and panic attacks, according to Sheade and Zalaquett.

Sometimes, the effects of trauma are so deeply rooted or long-lasting that a client doesn’t even realize it is the foundation for other problems such as sleep disorders, says Zalaquett, a member of ACA.

PTSD in children is often misdiagnosed because their struggles to pay attention and with acting out are labeled as attention-deficit/hyperactivity disorder (ADHD), says Sheade, an American Counseling Association member who is working on a doctoral dissertation concerning veterans, PTSD and equine-assisted therapy at the University of North Texas.

In the case of military veterans, PTSD is often compounded by a host of other issues, from the stigma the military culture attaches to seeking help for mental health issues to the adjustment of returning from deployment overseas, which can create unanticipated challenges in relationships with a spouse or children.

Those who have served in the military often feel like others don’t understand them – or understand the challenges they face returning to civilian life — or want them to just “get over it,” says Sheade.

In her experience, Sheade often sees veterans with PTSD who try to self-medicate with alcohol or other drugs.

The first step, says Sheade, is to get the veteran to acknowledge that he or she has a problem. From there, Sheade tries to move the client toward realizing that PTSD is a normal response to trauma and that with treatment, he or she can move beyond it.

“[I try to] help them understand that and feel a sense of hope … help them accept their experience and that there’s nothing wrong with them,” she says.

For many veterans, the thought of seeking help and going to therapy carries a negative stigma. They are also more likely to have trouble trusting civilian counselors, who can be unfamiliar with military culture, Sheade says.

“Especially if they’re active duty, there’s a lot of worry about going to see a counselor and how that could affect their military career going forward,” she says. “There’s still such a need for veterans to find services that are acceptable to them — services that they can afford [and that offer] quality care.”

However, counselors shouldn’t assume that every military client will have PTSD, says Zalaquett. Although PTSD is more prevalent among veterans, the majority of service members will not develop the disorder.

Proper assessment and diagnosis is key, Zalaquett stresses. It is also important to understand that not everyone who experiences trauma — whether service member or civilian — will develop PTSD.

“Make sure treatment [for PTSD] is really needed,” says Zalaquett. “Treating for the sake of treatment, without a clear need, has been shown to do more harm than good in some cases. … For a while, we tried to intervene very early to prevent PTSD in those exposed [to trauma]. It turns out that in some cases, this immediate intervention caused more PTSD than no intervention [would have].”

In cases of PTSD, counselors should use therapies that play to the client’s strengths, skills and interests, Zalaquett says.

“Evidence-based therapy is important, but a counselor needs to tailor therapy to the uniqueness of a client also,” he says. “… I have the utmost respect for and I value what the person brings with him or her [to a session]. We use what’s there to build a potential solution.”

Information and resources from the National Center for PTSD: ptsd.va.gov

The National Center for PTSD’s page on changes made to PTSD diagnostic criteria in the fifth edition (2013) of the Diagnostic and Statistical Manual of Mental Disorders (DSM-5): ptsd.va.gov/professional/PTSD-overview/diagnostic_criteria_dsm-5.asp

The National Center for PTSD’s “About Face” awareness campaign: ptsd.va.gov/apps/AboutFace/ 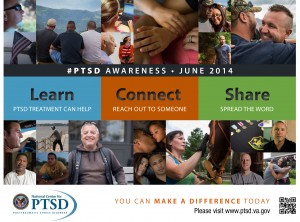