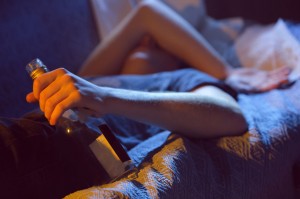 Mental health treatment has greatly improved over the past century. It has moved away from exiling patients to mental “hospitals” and instead offers inpatient, outpatient, partial hospitalization, individual therapy, group therapy and several other options. There is, however, one specific mental health population that is underserved and underrepresented time and time again — the mental health population with co-occurring substance use and abuse (addictions). Substance use and abuse is on the rise all over the country. Why is it then that these individuals with a commonly co-occurring disorder are so infrequently treated by mental health professionals outside of the drug and alcohol community?

I have a personal powerful experience that illustrates this uncommonly treated mental health issue. Shortly after my family experienced the tragic death of two very close friends, all hell broke loose. Depression, anxiety and heightened levels of stress came out in everyone. For me, this resulted in exclusion from groups, hiding in the hallways at school and focusing only on specific tasks such as sports and grades. For my older brother, it resulted in experimentation with drugs and moving down a path of crime.

My parents forced me into counseling when I was 15, in my mind to keep me from turning down the road that seemed inevitable for my brother. My sister kept moving on and used this tragic event as motivation to push forward. My brother began to drink and drink some more and then find whatever drug he could to numb the pain he experienced as a result of his unrelenting grief.

My response and my older brother’s response to this tragedy were quite similar. We were both depressed. We both talked of ending our lives. In fact, there were threats and attempts. There were also times of panic in our home because someone couldn’t be found. Eventually, I was forced into counseling. Initially, this was against my will, but to this very day, I cannot thank my parents enough for doing that. It not only saved my life, but it also inspired me to help others and, hopefully, help save their lives too.

My older brother continued on the same path and would not listen to anyone. My parents tried to help him and talk him into counseling, but he refused. Eventually he ended up being arrested, spent five different periods of time in jail totaling roughly four years and has had eight different stints in drug rehabilitation centers. He has been hospitalized due to numerous suicide attempts and still talks of wanting to die (while currently in counseling and rehabilitation).

My experience with depression and anxiety during this time led to much-needed counseling and a deep growth experience that eventually led to my entrance into the counseling profession. My older brother’s experience of possible posttraumatic stress disorder (PTSD) and/or depression has led to drug addiction and a criminal record (in addition to a lack of treatment, he has never received any formal diagnosis aside from his addiction). To me, this suggests that PTSD and/or depression are not merely co-occurring mental health issues but rather pre-occurring mental health issues. While he has received treatment on several occasions, treatment has been pulled from him as well. Mental health treatment has always been an additional side treatment, never the primary focus. When a relapse occurred, often triggered by a specific event, time of year or painful memory, mental health treatment ceased to continue, thus moving him further into the depressive state of mind.

So, as you can see, this topic hits close to home for me. Growing up, I witnessed the destruction that addiction can have on a family. Experiencing several deaths and tragic events early in life has a prominent effect on what road an individual will take. For my brother, that road ended up being drugs, alcohol and crime. For me, it had the opposite effect. I saw what my brother’s actions did to him and to those around him. Don’t get me wrong. I was tempted to follow that same path and even tiptoed that line, but ultimately I made the decision to help those in need instead of joining them.

In my exploration of this topic, study after study validated the connection I see. A 1998 study by Pamela Brown, Robert Stout and Jolyne Gannon-Rowley found that 42 percent of women in an inpatient substance abuse treatment facility had co-occurring PTSD. The idea that PTSD clients frequently suffer from substance use disorders, while clients with substance use disorders often present with additional psychological disorders is represented in several studies, including from Pamela Brown, Patricia Recupero and Robert Stout in 1995; Sudie Back, Angela Waldrop and Kathleen Brady in 2009; and Ping Wu, Christina Hoven, Ngozi Okezie, Cordelia Fuller and Patricia Cohen in 2007.

Several studies discuss the implications this has on substance use/abuse as well. For example, Brown, Stout and Gannon-Rowley found that PTSD symptoms and substance use disorder (SUD) symptoms moved in a positively correlated manner; when PTSD symptoms worsened, SUD symptoms worsened as well. Wu and colleagues stated that “alcohol abuse/dependence was significantly associated with depression even after controlling for several potential confounding factors, such as other psychiatric disorders.” These issues seem to have been addressed rather readily in the late 1990s. So why are we not taking note of these findings and allowing them to influence current treatment?

This is where my interest turns from personal to public. Can we not see the obvious co-occurring mental health issues with addiction? Things such as PTSD, depression, anxiety, etc., are so commonly seen among this population by the general public, yet many counselors still refuse to treat an addict who is not currently clean or sober. Why? In 2008, Theresa Souza and Richard Spates pointed out that upward of 50 percent of individuals in inpatient treatment facilities for substance abuse also met criteria for PTSD. Is it not possible that the use continues because of that untreated mental condition? The issue of pre-occurring (or even co-occurring) mental health issues is one that does not seem to be new in the realm of substance use disorders, yet it is one that is commonly, in my opinion, overlooked. I have seen firsthand the impact that PTSD symptoms or depression or anxiety (you name the mental health condition, and it most likely fits) has on one’s substance use and abuse. So why are we not treating these as well?

Yes, there are arguments to be made that until an individual gets his/her substance use under control, we are limited in our abilities to assist them. But what about those who began using because of the pain they feel within? The ones who ultimately want to stop but cannot bear to be clean/sober long enough to face those emotions, memories and issues until the pain inside subsides. Are we not called ethically and morally to provide support and services to those that need them? Who is to say that some other mental health condition led to this substance use/abuse? What if this is not the major concern with this client? What are we doing to help them then? Sending a client to a rehabilitation facility to treat an addiction if we are not working toward the solution to the bigger problem is doing nothing to help the individual. The client will find a new way to cope with his or her issues. Maybe it won’t involve drugs, but let’s face it — it is likely going to be a socially unacceptable coping mechanism.

I believe that mental health disorders are often the root cause for addiction. Oftentimes, in my opinion, mental health disorders are pushed aside when an addiction or substance use/abuse disorder comes to light. We often ignore what I consider to be the main cause for an addiction in these cases and attempt to approach the substance use/abuse disorder as the sole issue. I believe that by treating an addiction without assessing the full needs of the client and diminishing his or her mental health treatment, we are only covering the wound with a Band-Aid. Instead, we need to get to the root of the problem. Yes, addiction is an issue that needs to be dealt with appropriately. However, by diminishing the client’s other issues, we may be dealing with an issue (addiction) that will simply return once treatment has ceased. An Australian study by Wenbin Liang, Tanya Chikritzhs and Simon Lenton in 2011 points out that treatment of mental health disorders and substance use disorders has poor outcomes in cases in which one of the disorders is not diagnosed.

If we focused on the other co-occurring issue as well as the substance use issue, I believe we would see a dramatic rise in success rates for these individuals. I think that many times the addiction comes about due to self-medicating or as a coping mechanism. Taking away this way of dealing with the root issue without also confronting the root issue is akin to saying, “Your only problem is that you use (insert drug here).” If we can help an individual control his or her depression, worry, PTSD, etc., we can then approach the substance use issue from a broader lens — and possibly a more successful one.

I believe it is part of our duty as professionals to help serve and advocate for clients. Perhaps I am just a naïve graduate student looking for answers to a question that is beyond me, but maybe, just maybe, there are other professionals out there contemplating how to approach and help solve this problem on a daily basis like I do. It is to you I ask: What are we not doing? What is there that can be done to improve this issue? What are we missing?

We are called to be advocates for our clients, right? We need to advocate for appropriate services for those with mental health disorders co-occurring with addictions (substance use disorders). Addressing these pre- and co-occurring issues may improve treatment outcomes and lead to healthier and more effective treatment modalities.

Collin Nordby is a graduate student in the clinical mental health counseling program at Indiana University of Pennsylvania. He was recently chosen as one of six recipients of a 2014 NBCC Foundation rural scholarship, awarded to counseling students who commit to practicing in rural areas upon graduation. Contact him at rszs@iup.edu.