The American Counseling Association recently released its 2014 counselor compensation survey, the organization’s first large-scale effort to determine the salary levels, health care and other benefits earned by those in the counseling profession.

The project determined that the average primary salary for counselor educators is $66,405 annually. Rehabilitation counselors make $53,561 on average annually, while school counselors have an average salary of $53,299 per year. Mental health, clinical mental health and community counselors were found to have the lowest average annual salary at $40,422. All other counselor specialties were put into the category “other,” which was determined to have an average primary salary of $51,074 annually.

Close to 9,000 counselors – ACA members and nonmembers alike – were surveyed in the fall of 2013 to determine the average salaries. As a whole, counselors’ retirement, health care and other employer-sponsored benefits were found to exceed national standards.

Chart from page 28 of the American Counseling Association’s “2014 State of the Profession: Counselor Compensation.”

David Staten, president of the American Rehabilitation Counseling Association, a division of ACA, says he is “pleasantly surprised” by the survey’s average salary figure for rehabilitation counselors.

“That number is encouraging, but there is more work to be done to enhance the salaries for all counselors,” says Staten, a licensed professional counselor and professor of rehabilitation counseling in South Carolina. “Given the rigorous academic training and the pending debt from student loans, it is imperative for counselors to be adequately compensated for their hard work. Most counselors are not in this profession to become rich. However, we push our clients to maximize their potential in all aspects of life — physically, mentally, emotionally, financially, etc. Thus, I believe we should strive to reach those same standards.”

For those reasons, Staten says he believes all counselors should be making a minimum of $100,000 annually.

Stephen Giunta, president of the American Mental Health Counselors Association, another division of ACA, expressed appreciation for ACA’s first effort at calculating average salaries for the profession. However, he thinks the initial survey is far from conclusive.

“While this first effort of its kind does give us an initial view worthy of our consideration, I look forward to subsequent surveys with a larger number of participants. With over 120,000 licensed counselors in the field, I encourage everyone to participate in succeeding surveys because far too many questions are left unanswered,” he says.

Giunta, a licensed mental health counselor and clinical supervisor in Tampa, Florida, says it would be helpful if future surveys asked clinicians about the rates they charge.

“We all know that insurance providers’ reimbursement rates have been relatively flat for over a decade, but I wonder to what extent clinicians have raised their rates over the same time period,” Giunta says. “I am also interested in knowing the parameters that clinicians in private practice have set for indigent rates and sliding scales. I suspect far too many clinicians, particularly young professionals, have set indigent and sliding scale rates below their hourly break-even cost points. Specific to part-time private practice, I wonder what percentage of those individuals have boutique, cash-only practices.”

A look at the numbers

In the 100-page survey report, ACA cautions that the average compensation figures should be regarded as a “rough estimate” because counselor pay varies widely by geographic and work setting. 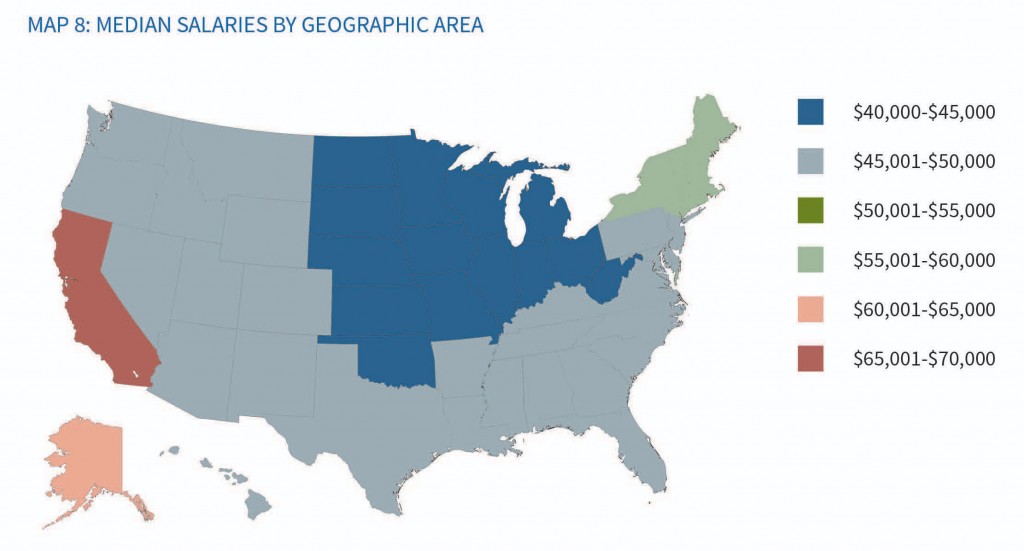 Map from page 64 of the American Counseling Association’s “2014 State of the Profession: Counselor Compensation.”

“We all know that counselors aren’t in this profession for the money,” writes ACA CEO Richard Yep in the survey’s executive summary. “But we did find that counselors can be well-compensated in many ways besides salary. Benefits such as health care coverage for counselors exceed the norm for the U.S.” 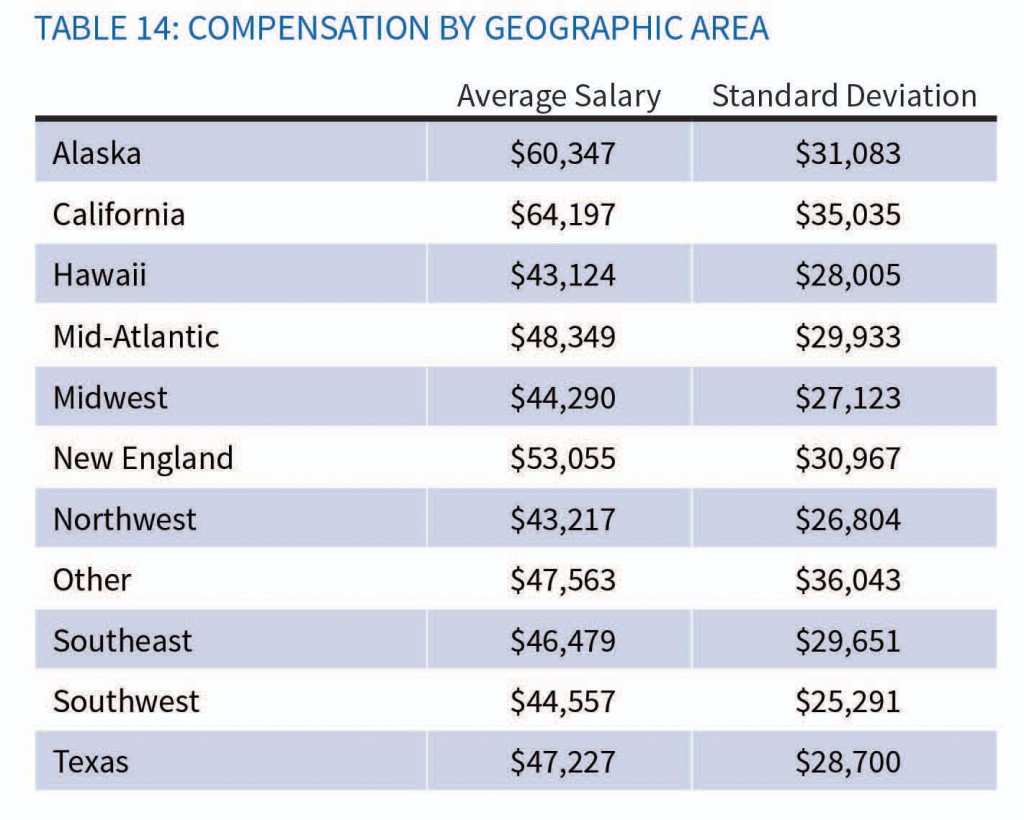 Chart from page 29 of the American Counseling Association’s “2014 State of the Profession: Counselor Compensation.”

Eighty-three percent of counselors who responded to the survey reported that they have medical insurance coverage, and 76 percent said they have an employer-sponsored retirement plan.

The survey also found that a significant number of counselors work two or more jobs or combine multiple part-time positions. According to the survey data, 34 percent of counselors hold a second job outside of their primary counseling position.

“In my opinion,” Staten says, “these statistics underscore the importance of counselors being able to secure a salary that compensates them for their efforts. Also, if counselors are busy juggling multiple jobs, how much does lifestyle contribute to burnout?”

Counselor educators are most likely to hold a secondary position; 57 percent of counselor educators who responded to the survey said they worked more than one job, such as an adjunct faculty position or in a private practice. It’s important to note, however, that the survey’s average salary figure of $66,405 is for primary employment only and does not include secondary positions.

On average, counselors of all types who work multiple positions make an additional $3,133 annually, according to the survey data.

“Although a significant proportion of counselors are holding down a second job, that job is, in most cases, likely a chance to further grow or explore a passion for counseling, rather than a means to make ends meet,” ACA wrote in the survey report.

ACA’s entire membership body was invited (via email) to participate in the 46-question, web-based survey. A sampling of counselors outside of ACA was also contacted via state licensure and certification lists and other databases.

Counselors from 49 U.S. states took the questionnaire (no one from Rhode Island responded), as well as a small sample of international counselors.

The largest percentage of the 8,949 survey responders were from the Midwest and Southeast regions of the United States.

The full survey report, which is available for purchase through the ACA bookstore, breaks down the data by education level, certification, work setting and many other subcategories. Salary figures for the five categories — mental health counselors, school counselors, rehabilitation counselors, counselor educators and other — is dissected in great detail by geographic region, salary distribution, amount of paid time off, health benefits and other factors.