The final vignette of this series reflects an actual situation that occurred in my diversity workshop. I am including my thoughts/rationale and the intervention I used during the situation, as well as questions for other group facilitators to consider, possible group/dyad exercises and a summary that helps to place the event in a larger societal context.

All the vignettes in this series have been adapted from my diversity training manual, The Art of Mindful Facilitation, although the manual is not necessarily meant to be a faithful adaptation of the video clip that accompanies each vignette. I am also including an example of the presenting workshop issues related to the vignette — in this month’s case, the issues of blame, shame and hurt.

This is an interactive process, so I ask that readers follow the steps below in their suggested order:

1) Watch the short video clip below:

2) Return to this article and read the vignette.

For an introduction to this series, read “Group process from a diversity lens” in the April issue of Counseling Today.

This vignette emerged from a corporation workshop in which I was discussing how most discrimination takes place. All of the folks in the workshop were standing around, saying nothing. (Unlike therapy, where there is a case assessment, participants who speak out at our workshops are not necessarily planning to. Instead, they are stimulated to speak out either by my stories or our films.)

An African American man, Rufus, finally shared how tired he was of never seeing white folks stand up against racism and sexism. “We don’t have very much chance and never get the support from any white people,” Rufus exclaimed.

Rufus was furious, yelling out, “What the hell is wrong with you, Charlie? Can’t you look at me? Stand up!”

Charlie shook his head sideways, looking only at the floor. The room was dead silent for what seemed like minutes.

Practice process questions for the facilitator

1) What came up for you when watching the video and reading this vignette?

2) What are some of the key words to focus on?

3) What angered Rufus? Why?

4) What is familiar about Rufus’ frustration?

5) What is Rufus saying he needs and wants from EuroAmericans? Why?

6) What came up for you about Charlie? Why?

7) Were Rufus’ accusations of Charlie justified? Why or why not?

8) With whom would you work first? Why?

9) What are the major issues here?

10) How would you include the group?

Obviously, there were a lot of emotions going on in the room. Sometimes it is easy to become frightened by the chaos and volume of voices and miss the pain and anguish that is being expressed. As I was watching Rufus, I kept thinking of how liberating it must be for him to finally express himself, and yet at the same time, how frightening it must be because of the possible consequences. What Rufus was doing required a whole lot of risk-taking.

I wondered if Rufus trusted what he was seeing, particularly when all the white participants stood up. I kept wondering if Rufus thought they stood only because of peer pressure or their fear of an angry black man.

When Charlie didn’t stand, although his action (or inaction) was puzzling, there was a sense of relief in the room, as if an opening to something more real, direct and deep was going to take place. Charlie’s body language told me that this was not just an act of defiance. His face and depressed body language spoke to a deeper story.

The trick was figuring out how to acknowledge Rufus while still being able to help Charlie feel safe enough to open up. This would require a lot of diplomacy and some good old-fashioned luck. I sensed that the opening lay in Charlie’s journey of getting to this room. If Charlie were to heal, it had little to do with Rufus and much to do with Charlie. My work would involve becoming a bridge for the two of them — an entrance to the past.

I asked Rufus to tell Charlie why he was so angry with him and what was familiar about this scenario. I then sat next to Charlie. I put my hand on his shoulder and told him that I knew this wasn’t easy.

After Rufus finished, I told Charlie there was something I was wondering about. I asked him what was familiar about the scenario that had just played out with Rufus.

Charlie waited for a moment and then shared in a very quiet voice that his father was an alcoholic and that he and his brother often hid and kept very quiet because if his father found them, he would beat them in a furious rage. I asked him how those experiences in his family affected him today. Charlie answered, “I guess I’m still running and hiding.” 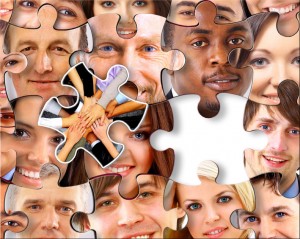 I next asked the group if they had known these things about Rufus or Charlie. No one raised their hand. I then proceeded to share with the group that both of these men would need their support in the days and months ahead. Rufus had shared that he needed folks to stand up for him against racism and sexism, while Charlie needed to know that he no longer had to run away or hide — that he could speak up without being harmed or abused. The group members wholeheartedly raised their hands in a show of support.

Rufus walked across the room and hugged Charlie. Sobbing, Rufus said, “I am so sorry. I just didn’t know.”

Charlie said to the group and Rufus, “And I guess what I need to do is take a chance again.”

1) What came up for you during this experience?

2) Who did you identify with? Why?

3) What was good about this experience? What was hard about it?

4) Why do you think Rufus was so angry?

5) What’s familiar about this experience for you?

6) Have you ever not stood up against something you knew was wrong? Why?

The definition of blame is assigning responsibility for a fault or wrong. Those who are heavily into blaming often feel powerless and/or overwhelmed by some perceived wrong. As a consequence, something in their lives remains unfinished and continues to wound and stimulate them.

Inquire whether they are blaming an individual, a group or an institution. The perpetrator or institution may be unavailable for dialogue, which brings about feelings of depression and hopelessness for the person or persons who were wronged.

Those who are blaming are often unable to be direct with their own feelings. Hence, they are often left with unfinished feelings that foster resentment and anguish.

What kinds of “rewards” do they get from being victimized? On the other side, what is lost from their lives when they are unable to feel relaxed and safe?

1) Through the use of role-play, have the participant confront his or her perpetrator(s) by choosing audience members who most closely represent the perpetrator(s).

2) Have the participant share what he or she needs to heal.

5) Does the participant want a solution?

6) Explore the kinds of feelings the participant is withholding.

7) What is the participant’s individual, group or family history regarding this issue?

The definition of shame is a painful emotion caused by a strong sense of embarrassment, guilt, disgrace or unworthiness.

The difference between shame and guilt is that people who feel shame think they are inherently shameful, whereas people who feel guilty typically associate that feeling with a specific act or situation.

People who feel shame often look down or avert their eyes when talking about their experiences. Have them look up, not only to face those around them, but also to be seen, accepted and possibly forgiven.

Shame often “freezes” people to the past and makes them feel powerless. The work is to have them relate what happened and how it affects them today. This gives their shame a face and present-tense reality.

1) When the person is finished sharing, have the group notice the impact of what happened to that person.

2) Have the group repeat back what it heard.

3) Ask group members if they have ever felt ashamed and didn’t want anyone to know about it. If they are willing, have them share their personal stories.

We all have something of which we are ashamed. To go on with our lives, we need to take responsibility, forgive ourselves and others, and then try again.

The definition of hurt is to feel pain or distress. Being hurtful is to cause distress to someone’s feelings.

Hurt is usually a painful experience that is unfinished. It takes energy to suppress one’s pain and to move on. However, that pain usually goes somewhere and can be triggered at any time by some familiar stimulus.

Most participants deal with the present tense of a person’s hurt rather than exploring the root of the individual’s pain.

Participants who have been hurt often need to retell their stories and, in the process, be believed, understood and empathetically embraced.

Participants need to go back to the “scene of the crime,” expressing what happened and how it affected them, both then and now.

When hurt is unacknowledged and invalidated, it becomes anger. Allow the hurt to have a safe place to be expressed.

If participants have a set script to describe their hurt, ask them what is familiar about this and what the “rewards” are for playing out this scenario once more.

If participants are unable or unwilling to talk about their hurt, have the audience notice what happens when one feels unheard and unseen. The trauma can cause people to withdraw or to blame themselves to keep from being hurt again.

To help someone return to the scene of the crime, try to reconstruct the period of time and surroundings as closely as possible. A good storyteller uses key words that the participant used. This creates an “emotional ambience” that will translate into a trusting connection with the participant.

Often, it is easier for participants to share what they don’t need before identifying what they truly need to heal.

As the facilitator, I presented the following summary to the entire group:

“What we can see here today is that everyone has a story. Sometimes it’s easier to make assumptions because of someone’s silence or anger. But behind each of those emotions is a journey that begs for compassion and understanding. We have only to ask and to be willing to listen and try to understand.

“What Rufus asked for was for someone to stand up. It took a lot of courage and risk-taking for him to share his pain and anguish today. This company and community are lucky to have someone so brave and courageous. I was also touched by his reaching out to Charlie and taking responsibility for his assumptions.

“I also want us to remember the words that Charlie shared with us — that given all that has happened to him, maybe it is time to stop running. He might be able to do that now that he has shared his story.

“All that Rufus and Charlie wanted were to be treated kindly and justly. That is a world worth standing up for and fighting for — a just and equitable world for our children and ourselves. Perhaps that is the secret to world peace — taking care of each other, one person at a time.”