Every once in awhile, a movie comes along that really seems to “get it,” portraying mental health struggles or the counselor-client relationship in an authentic, meaningful way.

For Ryan Thomas Neace, that movie is Good Will Hunting. The 1997 film portrays the back-and-forth between a therapist, played by Robin Williams, and client, played by Matt Damon, as complicated, imperfect – and real, says Neace, a licensed professional counselor in St. Louis.

The good in Good Will Hunting

Clients often come into therapy expecting us to be soothsayers or magicians or know-it-alls, but we’re not. Hollywood tends to reinforce these kinds of notions when they depict therapists, as well as humans and human interactions, with the same kind of naïve romance. In the movies, therapists 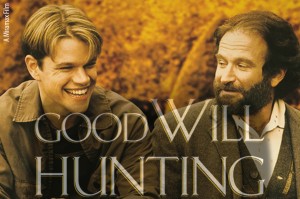 usually sit on swanky, leather furniture in offices with ceiling-to-floor windows. Men have six-pack abs and chiseled chins, and women have unrealistically tiny waists and large breasts. People are heroic or villainous, but usually not both. Initially complicated interactions tend to resolve in 120 minutes or less.

But in real life, most of the therapists I know are sweating it out each week to keep costs down and clients coming in — and into offices with wood paneling and florescent lighting no less. Men and women have physical imperfections, and people are capable of all manner of admirable and despicable acts. And much to our chagrin, life doesn’t wrap up neatly and people often remain in some level dysfunction, even after therapy.

I love Good Will Hunting because it portrays all of this, seemingly without trying. The characters possess a tremendous amount of depth and realism. Therapy takes place in the basement office of a community college. Thick Boston accents abound in conversations fueled by fear, sadness and booze, and laced with enough curse words to make you blush. It becomes obvious from the get-go that the therapist, client and supporting characters aren’t going to have everything neatly wrapped up by the end. They remind us that we’re just broken people trying to help one another make sense of a complex world.

Therapist Sean Maguire (portrayed by Robin Williams) is more than capable of executing therapeutic maneuvers, but they aren’t flagrant and obvious, and his emphasis is clearly on relationship over technique. Instead of trying to “be a therapist,” he’s just himself, and in his authenticity, he is therapeutic. That means that when his client makes him mad, he gets mad. When his client weeps, he weeps with him. And when his client challenges him, he has to do some soul searching of his own to keep up his end of the bargain in therapy to be mutually vulnerable. When therapy terminates, his client has made real and substantial progress, but he’s not out of the woods yet.

In short, nothing is perfect. And, thus, neither is the process of therapy perfect.

But Good Will Hunting portrays therapy and, indeed, life as good and worth the while. And good things happen as a result, sometimes in large ways and more frequently in still, small exchanges that we usually overlook.

This is much closer to my actual experience of therapy and life.

Ryan Thomas Neace is a licensed professional counselor in Virginia and Missouri and a national certified clinical mental health counselor. He works extensively with teens, adults and families at his St. Louis private practice, Change Inc. He blogs for the American Counseling Association and The Huffington Post.