When discussing the idea of girls in the wilderness, the topic of vulnerability comes up often. Typically it is in the context of how girls are vulnerable in fragile ways that we should protect or shelter. However, having been a teenage girl myself, and now having worked as an adolescent 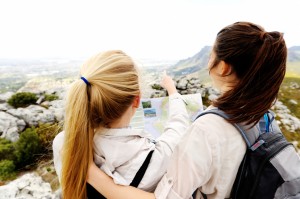 mental health therapist for nine years, I can confidently say that vulnerability among girls in the wilderness has more to do with courage and resilience than anything else.

Brené Brown is one of the world’s leading researchers on the study of vulnerability and shame. In her most recent book, Daring Greatly: How the Courage to Be Vulnerable Transforms the Way We Live, Love, Parent and Lead, she highlights relevant themes such as learning to embrace imperfections, letting the people we love struggle and other elements of healing our shame. The book’s title was inspired by Theodore Roosevelt’s “Citizenship in a Republic” speech (1910), in which he said, “It is not the critic who counts; not the man who points out how the strong man stumbles, or where the doer of deeds could have done them better. The credit belongs to the man who is actually in the arena, whose face is marred by dust and sweat and blood; who strives valiantly; who errs, who comes short again and again, because there is no effort without error and shortcoming; but who does actually strive to do the deeds; who knows great enthusiasms, the great devotions; who spends himself in a worthy cause; who at the best knows in the end the triumph of high achievement, and who at the worst, if he fails, at least fails while daring greatly, so that his place shall never be with those cold and timid souls who neither know victory nor defeat.”

I have witnessed countless examples of girls daring greatly in the arena of my adolescent therapeutic wilderness group in Bend, Oregon. As we drive out to our remote wilderness use area, my thoughts are filled with a review of the clinical conceptualization of each client. I systematically picture the face of each girl and review the presenting concerns, clinical assessment and other data relevant to the case. Anxiety, depression, history of self-harm and suicide attempts, defiance, drug and alcohol abuse, trauma, history of being bullied or bullying, and tumultuous family relationships are among the most common clinical features represented in my group at any given time. I also consider the strengths and innate potential that each girl possesses, wondering what has stood in the way of the maturity and expression of those strengths. My mind then wanders to the awe of watching nature (the wilderness) help each girl peel back the layers of unnatural overstimulation resulting from daily technology immersion and the false faces of social media relationships.

My teenage years took place before the era of Facebook and cell phones. I am astounded by the resilience that today’s adolescents must possess in order to survive the fast-paced, often cruel and technologically advanced world in which we now live. Many of the adolescent girls with whom I work have spent precious little time connecting with nature or disconnecting from their phones, televisions, computers and social media sites. Few have ever slept under the stars or stopped to listen to the wind whispering through the trees. In fact, most of the teenage girls I work with initially find it very uncomfortable to be in the remote wilderness. I commonly hear “I’m not good at being alone with my thoughts!” or “I can’t possibly be expected to sit and reflect; it’s too hard for me!” and “I need counseling, not sitting in the middle of nowhere!” These protests are understandable because these girls never learned how to sit by themselves and connect with nature. Instead they are used to being surrounded by any number of distractions that encourage disconnection from nature and the here and now.

One day, I arrived after my long reflective drive to the remote site where my group was camping. With my trusty, nature-loving golden retriever by my side, I exited our burly off-road vehicle, took a deep breath of the warm Cascades air and hiked up the barely visible dirt trail. Taking a final step over the gnarled volcanic rock, I could see the group of girls in the distance. Instantly, I was struck not by what I saw but by what I heard.

My ears and heart were suddenly being serenaded by six harmonizing girls. They were standing in a circle, all eyes focused on the group-appointed 17-year-old pseudo choir director. Their bodies stood like gracefully poised trees as they gently sang out. But they weren’t singing a song by any artist 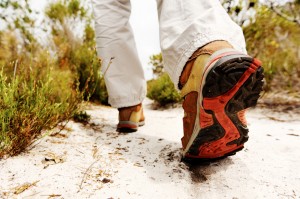 commonly attached to their generation, such as Lady Gaga or Miley Cyrus. Instead they were harmonizing so beautifully to “Rose Red,” a ballad from the Elizabethan era.

There was a disorienting two-second lapse of time where I had to remind myself where I was standing. For one lovely moment that day, we were no longer in the Oregon desert in a therapeutic wilderness program defined by mental health struggles and adolescent angst. Instead we were transported to a magical place where teenage girls put their pain aside to learn a song together, letting their voices sing out and dance along the juniper tree-spotted hills of the Cascades.

It was beyond any brilliant counseling technique I could have applied. The moment was made possible through the influence of a connection to nature, a disconnection from the distractions of cell phones and social media sites, a positive group culture, the ongoing collaborative support of the entire treatment team and, of course, the courage of six teenage girls. The girls had been able to develop emotional safety within the group and increase their self-confidence, which gave them the courage to “dare greatly.” I believe the power of vulnerability and daring greatly can be linked to reconnecting with one’s self through nature and disconnecting from the conveniences of our technologically smothered first-world lives.

In 2011, Brené Brown wrote, “I define connection as the energy that exists between people when they feel seen, heard and valued; when they can give and receive without judgment; and when they derive sustenance and strength from the relationship.”

Among the circle of singing girls there were no perfect vocalists, no dominating ego, no cyberbullies, no gestures of self-harm, no competing debutants. There was only honest harmonized courage and the presence of emerging self-acceptance and genuine connection. Moments like that remind me how the influence of nature can transform and why the power of vulnerability is born from the courage to dare greatly.

Sabrina Marie Hadeed is a licensed professional counselor, national certified counselor and approved clinical supervisor. She is a primary therapist at Second Nature Cascades and a doctoral candidate at Oregon State University. Contact her at sabrinamariecounseling@gmail.com.

See the January issue of Counseling Today for an in-depth feature article on wilderness therapy (to which Hadeed contributed).