The Association for Lesbian, Gay, Bisexual and Transgender Issues in Counseling (ALGBTIC) held the first national conference in the history of the organization on Sept. 19-21. And what a conference it was! New Orleans was such a fitting place to hold this first conference because the city was where the founders of this American Counseling Association division first met and birthed ALGBTIC (or the Caucus of Gay Counselors, as it was called back then). Joe Norton, a counseling professor at the 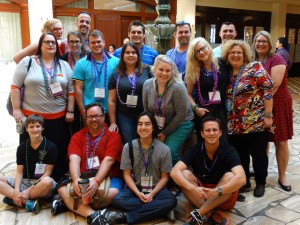 The Association for Lesbian, Gay, Bisexual & Transgender Issues in Counseling (ALGBTIC) held their first conference in New Orleans this fall.

State University of New York–Albany, had called for a meeting of “gay counselors” in March 1974 during the national convention of the American Personnel and Guidance Association (now ACA). And people came.

Out of that meeting, a plan was developed to propose a workshop at the next APGA convention that was to be held in New York City in 1975. Only a few individuals were able to put their names on the proposal for fear of being “outed.” The convention program committee accepted the proposal, and the workshop was assigned to a room that was supposed to hold about 90 people. Instead, it ended up being standing room only. We had to close the doors to the room, not because it was too crowded, but because some of those who attended that first workshop were simply afraid — afraid that they would be fired by their school district or college or community-based organization for even being seen attending this type of workshop. Such were the times.

Fast forward to 2014. Expecting 100 attendees for this inaugural conference, almost 300 showed up. Organized in part by ALGBTIC President Jane Rheineck, the conference was a rich feast for those who specialize or merely have interest in this area of the counseling profession. At the opening session, several of us had tears in our eyes.

It is rare for me to go to a professional conference and find too many programs that I want to attend, no matter how large the conference. Let’s just say that I’ve been around awhile. But this conference 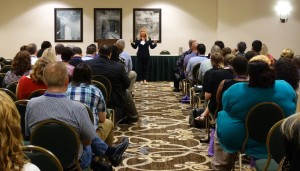 ACA President-Elect Thelma Duffey speaks at the opening session of the ALGBTIC conference in September.

was so very different for me. In my life, I’ve never been to such a conference where I literally wanted to go to every program on the schedule. A special energy was present among the attendees as we packed into each session to listen, learn and talk about our passion for counseling with LGBTQQIAA people (yes, we have a growing acronym and community).

This conference was also well supported by the leadership of our profession, with ACA President-elect Thelma Duffey and three former ACA presidents (Patricia Arredondo, Colleen Logan and myself) in attendance. The buzz throughout this conference was that there has to be another one. Whether it is in one year or two years is the only question. Not if, but when. But attending the very first one after 40 years in our profession was so 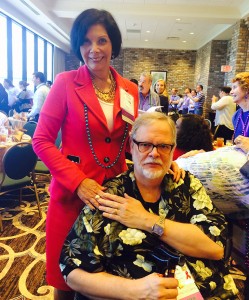 Mark Pope and Patricia Arredondo at the ALGBTIC conference.

As Sam Gladding might have said at one of his many speeches, quoting the lyrics of Sam Cooke, “It’s been a long time coming, but I know a change gonna come.” I was so thrilled to be there for this one.

Mark Pope is professor and chair of the Department of Counseling and Family Therapy at the University of Missouri – Saint Louis. He is also a past president of the predecessor to ALGBTIC (Caucus of Gay Counselors/National Caucus of Gay and Lesbian Counselors), the National Career Development Association and the American Counseling Association.

For more information on ALGBTIC, or to see a slideshow of photos from conference, algbtic.org