It was a striking scene: Protesters, many of whom had been on the front lines of the unrest and turmoil in Ferguson, Missouri, for more than 10 weeks, pausing to talk with a counselor and create a scene in a sand tray.

At times, there were “heavy tears” as grief, frustration, hurt, exhaustion and anger – as well as hope and empowerment – bubbled over as people told their stories, says Brian Hutchison, a licensed professional counselor (LPC) and assistant professor at the University of Missouri – St. Louis 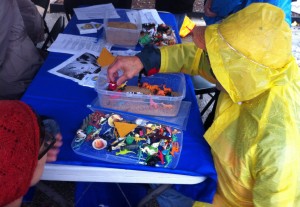 A person creates a scene in a sand tray in the UMSL counseling tent in October. Photo courtesy of Brian Hutchison.

(UMSL). Some of the protesters talked of being hit with rubber bullets, seeing friends arrested or being arrested themselves.

Hutchison is part of a group of roughly 40 UMSL counseling department staff and students who have been involved in numerous initiatives in the Ferguson area this fall. Those initiatives have ranged from leading trauma response training with Ferguson public school teachers to organizing “pop-up” counseling tents near the ongoing protests and marches.

Tensions in Ferguson and the surrounding area boiled over this fall after unarmed black teenager Michael Brown was fatally shot by a white police officer, Darren Wilson, in August. Accounts of what transpired leading up to the shooting have varied widely.

Protesters and community activists have been demonstrating ever since the incident, some camping out in the city and sleeping in tents, Hutchison says.

Brown’s shooting was a flashpoint that opened long-simmering wounds surrounding racial inequality in the community.

“A Band-Aid has been ripped off a wound that had not healed,” says Holly Wagner, an LPC and assistant professor in the department of counseling and family therapy at UMSL. “People have been hurting for a long time, and they’re at the point where they’ve had enough — enough pain, enough misrepresentation — and they’re ready for change. That’s what this movement is about.”

Hutchison’s office at UMSL is a little more than one mile from the apartment complex where Michael Brown was shot; UMSL is located in the district where Brown went to high school.

The UMSL counseling department has long-standing relationships with many community leaders in the Ferguson area, Hutchison says, and the university was involved in the community long before it made headlines and became synonymous with racial tensions.

In the midst of all the turmoil, UMSL’s counseling department has set up counseling tents for protesters and onlookers and organized community meals with table discussions on race relations. It has also organized or participated in community workshops and a panel talk between local counselors, residents and community activists. On the day of Michael Brown’s funeral, Hutchison and his colleagues led trauma response training for teachers in the Ferguson-Florissant School District, after the schools had been closed for more than a week because of protests and ongoing tensions.

“There is violence [connected to the protests]. I’ve seen it,” Hutchison says. “But for every three people throwing bricks into a window, I’ve seen 60 people stand in between [the people throwing bricks] and the window. … I am so thankful and humble because I am witnessing a cohort of people activate as citizens. Not only have they camped out for 60-plus nights, but some of these people were in rival street gangs and reconciled when they heard about Michael Brown being shot. … That’s the best we can hope for in a generation of young people.”

Wagner, who is in her first semester teaching at UMSL, had put together sand tray kits for a unit on play therapy prior to the fall semester. When tensions began to boil over in Ferguson, Wagner thought the kits seemed like a natural tool to use in the community.

“Play is the way kids talk, but it’s also our language,” she says. “If we allow ourselves to engage in something that creates meaning in an immediate way, it helps us tell our story.”

The UMSL team in a pop up counseling tent at a recent protest. Photo courtesy of Brian Hutchison.

The team of UMSL counseling professors and students have been setting up a tent with tables, chairs and sand trays near organized marches and protests. Passersby are invited to stop in, pause to reflect and simply “tell their story” to a listening ear, Wagner says. Participants create a scene in a sand tray as they talk.

“It’s a space for them to come in and take a break — a small moment to say, ‘I’m not sure, I’m scared and I’m in pain,’” Hutchison says. “It’s some of the most amazing work I’ve done in my career. It’s really powerful.”

Participants are also given a handout that entitles them to five free counseling sessions at several clinics on the USML campus, as well as information about other local counseling offices that offer therapy on a sliding scale, Hutchison says.

The initiative has been so well received that people have to wait for a seat to open up sometimes.

“If they were a little dubious about [play therapy], as soon as they sit down and start doing it, that quickly fades away,” Wagner says.

The tent creates a quiet space and an opportunity to be heard — a welcome change from protesting and the struggle to get a message across, she says. People are not just willing but also needing to talk.

“People are so exhausted from yelling and wishing people would hear them. When they come to the tent, all they have to do is talk,” Wagner says. “… They’re so passionate about this. They’re giving everything of themselves to try and be heard and have some action take place.”

Through storytelling, people who come through the tent have been expressing grief and loss, trauma, disappointment, frustration, isolation and a sense of being misunderstood, report Hutchison, Wagner and Christina Thaier, a UMSL student who will graduate this spring with a degree in clinical mental health counseling.

On the other hand, a great sense of hope is also evident, according to the UMSL team. 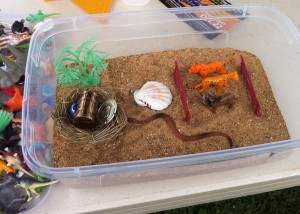 The young African-American man who created this sand tray scene said he was a crab figure he had placed under the shell to “hide,” and the snake represented the danger he was feeling. Photo courtesy of Brian Hutchison.

Often, participants will place figures such as trees, animals and shells upside down in the sand tray as they talk. According to Hutchison, this is an indication of feelings of chaos, turmoil and danger.

“The No. 1 thing I heard was the question of value,” says Thaier, an American Counseling Association member and president of UMSL’s Chi Sigma Iota chapter. “Am I valuable as a human being? What does what happened with Michael Brown say about my value as a person and his value as a person? What do I do about that, and how does it impact my life?”

The UMSL tents are not meant to be a place for intensive therapy, Wagner explains. Rather, they present an opportunity to provide a listening ear and offer referrals to a counseling office.

The UMSL team plans to keep offering what Wagner describes as their “mobile play therapy response unit” indefinitely. She believes they are filling a need that is likely to increase as the case surrounding Brown’s death makes its way through the courts.

“We’re still at the first chapter of this story, I’m certain,” concurs Hutchison. “We want to be a consistent presence, a consistent safe space.”

“This is not a sprint but a marathon. We are in it to be called upon repeatedly,” Wagner says. “… If people know we want to listen, they’ll talk and share their stories. My sense is that their real stories aren’t being listened to. What’s really on their hearts is yet to be told.”

UMSL’s Chi Sigma Iota chapter has covered the costs for the sand trays and other materials for the counseling tents, Thaier says. The chapter, which has roughly 40 active members on campus, is also discussing the possibility of continuing the initiative in local schools or senior centers.

The entire experience has been an opportunity to learn by doing, side by side with peers and professors, says Thaier, who is doing an internship at a private practice and applying to doctoral programs.

“We feel humbled and honored to be involved,” she says. “It’s taking our learning to such a deeper level. We’re all finding our voices of who we are professionally and what social justice is.”

“… It’s amazing to watch all of my peers have this experience with me and see that experiential learning on a whole new level,” she continues. “It’s been a bonding moment for us as students, working together and being able to talk and process our experiences. To see the emotion in everyone’s face, that’s a memory I’ll have forever.”

Hutchison, Thaier and Wagner agree that when social justice issues arise, a counselor’s role is to get involved.

“I feel Ferguson could be anywhere, I really do,” says Wagner.

The tensions and anger being expressed by protesters are not isolated to Ferguson, agrees Thaier.

“This is already in everyone’s backyard,” Thaier says. “You don’t have to be at a protest or be at a gathering to go back and have these conversations with your clients and ask ‘what support can I give?’”

The first step, Hutchison says, should be to listen and thoughtfully consider the situation before jumping in. For the UMSL group, this meant attending a rally in downtown St. Louis and visiting Ferguson to witness the police response this fall.

Most important, Hutchison adds, is a large dose of humility.

“No one knows what counseling on a city street during social upheaval looks like. We don’t have textbooks for that,” he says. “Be respectful and mindful of your own privilege. … Be humble. Be willing to be helpful and resist the urge to interject [your own opinions].”

Brian Hutchison is tweeting photos and updates about his department’s work in the Ferguson area. Follow him @DrBHutchison and look for the hashtag #UMSLCounseling

For updates and more information on the situation in Ferguson, Hutchison recommends these websites:

Rebecca Daniel-Burke, a counselor and ACA’s director of professional development, interviews Ken Oliver, a licensed professional counselor in Missouri. As a native of St. Louis, Oliver has a personal connection to Ferguson and the surrounding community. He currently serves as the graduate program director and associate professor of counseling at Quincy University in Illinois.