The people of Nepal are focusing on basic needs right now – finding shelter, food and water; staying safe; and caring for family. Anything else, including processing the trauma that comes from 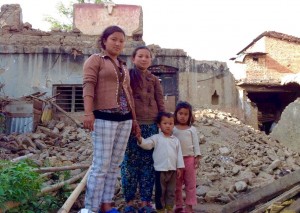 One of the girls in the Empower Nepali Girls program, standing with her family in front of what used to be their home. They are now living in a tent.

Kottler, an American Counseling Association member and professor of counseling at California State University Fullerton, traveled to Nepal this week to join in the work of Empower Nepali Girls, the nonprofit organization he founded 15 years ago.

“We [have] provided tents for people living outside, treated 20 patients for a variety of medical problems and tried to soothe the children, many of whom are a wreck,” he wrote in his travel journal May 12. “I feel so helpless, trying to hold them, reassure them and ease their fears, when what they really need is a safe place to live and a place to go to school.”

Empower Nepali Girls develops mentoring and supportive relationships with children at greatest risk of being forced into early marriage or sex slavery. Since the April 25 earthquake that devastated Nepal, however, ENG staff and volunteers have been helping with sanitation efforts, distributing supplies such as tents, food and water, and providing medical care to the injured. 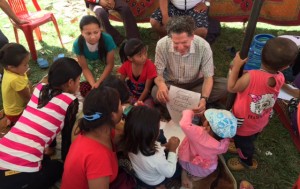 Jeffrey Kottler (top center) with children in one of the tents Empower Nepali Girls has set up since the earthquake. The children were drawing pictures and talking about where they were and what they were doing when the first earthquake hit, he says.

One of the ways Kottler’s team has tried to soothe the children in their program – and distract them from the ongoing aftershocks – is by encouraging them to draw and then hanging their artwork on the tent walls. The ENG team is also using and distributing an ACA fact sheet on trauma, Kottler says.

The initial 7.8-magnitude quake left much of Nepal in ruins, without electricity, safe drinking water, food and other basic supplies. On the day of the earthquake, an Empower Nepali Girls team member, Sara, was in the middle of her quest to climb Mount Everest to plant an Empower Nepali Girls flag on top of the world’s highest peak. She was trapped by an avalanche and stranded for three days, but she was eventually rescued, Kottler reports.

Aftershocks have rattled Kathmandu and the surrounding area since April 25, including another 7.3-magnitude earthquake this week. More than 8,000 people have died, while countless more have been injured.

Kottler experienced the 7.3-magnitude quake shortly after he arrived in Nepal.

“We were playing games with the children — ‘duck, duck, goose’ — when a huge earthquake hit, knocking many people to the ground, collapsing buildings and terrorizing the children who are already so fragile from the constant turmoil beneath the earth,” Kottler writes. “… The aftershocks continue to literally rock our world. I don’t feel haunted as much by the terrible shaking as I do by the sounds of the children crying and screaming and the glazed looks in their eyes. I couldn’t sleep last night very well because the aftershocks kept rocking the bed. I slept with my clothes on and flashlight nearby in case I had to bolt quickly.”

Many Nepalese have been sleeping outside out of fear of more aftershocks.

“Although it is early for major trauma symptoms to take hold, many of the children are having nightmares and many people refuse to go into their homes at all,” Kottler says. “I kept trying to reassure them that we would do all we could to help them rebuild their lives — and their homes and schools. It feels to them as if so many of their dreams are now gone.” 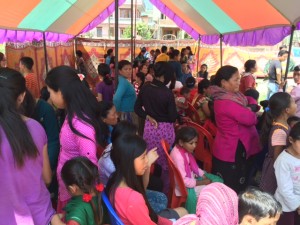 ENG families huddle together in a tent during an aftershock.

During his two-week trip to Nepal, Kottler will travel with an Empower Nepali Girls team to Namche, near Mount Everest, where the epicenter of this week’s earthquake was. Landslides and avalanches have washed away entire villages, he says.

“We are setting up medical camps in various regions to provide basic health care, distribute antibiotics to those with respiratory infections and distribute medical supplies to clinics in the areas. We’ve prepared simple treatment manuals for responding to the most acute trauma symptoms and the more severe cases that will start appearing in a few months when we return with another team,” Kottler writes in his travel journal.

“… Our team consists of a special forces medic, a hospital administrator and a friend acting as a ‘mule’ to help get all our medical supplies through customs at the airport. I saw so many supplies piled up at the airport, so little getting to the people who need them. We have to operate very quietly, under the radar, because the government has been making it very difficult for relief agencies to function. Riots have broken out with people trying to escape the capital or they are protesting the government inaction. Politicians are afraid to show their faces for fear they will be killed by everyone who is so furious at the chaos and incompetence of the government.” 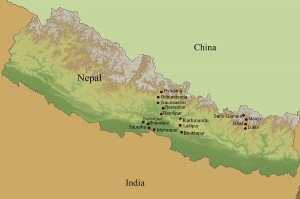 This map, courtesy of Empower Nepali Girls, shows the areas where the nonprofit operates. (Click to enlarge)

Empower Nepali Girls operates in 15 different locales throughout Nepal, including remote regions where children are the most at risk.

Kottler has traveled to Nepal more than 20 times since founding Empower Nepali Girls and working as the organization’s CEO. Numerous counselors and counseling students have traveled with Kottler to Nepal during the past decade, helping organization provide mentoring and mental health training, conduct home visits and teach in local schools.

Kottler spoke briefly about his work in Nepal when he co-presented a keynote address in March at the 2015 ACA Conference & Expo in Orlando.

Jeffery Kottler pictured at an ENG medical camp on May 13.

CT Online will post more articles in the coming weeks as Kottler continues to send in his travel journals from the field.