I grew up in a low-income housing project on the South Side of Chicago. I faced many challenges as a young girl in this homogenous and sometimes destructive community. Of the many things I experienced while growing up poor, I’d like to raise some awareness of how black girls continue to suffer within culture because of a low acceptance of their dark skin tone. This article focuses on “dark-skinned” African American girls.

Black girls have had a difficult time in our society for quite some time. Dating back to the days of 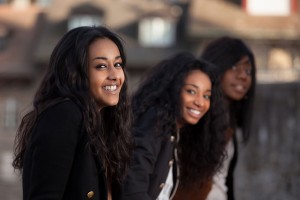 slavery, black women were stripped away from their families and taken away from their homes. This is history that may never be undone, and the lingering damage is compelling.

During these times, slave owners created the “paper bag” theory, which separated the black race further. Blacks who were lighter than the brown paper bag were able to work in the house and received “better” treatment than the other slaves. House slaves were seen as “better than.” I believe this initial separation of our race led to the detrimental impact that skin tone has on black girls with dark skin even today. Some black girls still describe their dark skin as being “less attractive” and even “ugly” in comparison with African American girls who have fairer, lighter skin.

The brown paper bag phenomenon created a hierarchy within the African American race. It led to many blacks being treated unjustly and unfairly not only by whites but also by people of their own race. Slavery was abolished in the United States in 1865. But 150 years post-slavery, young black women continue to carry the weight of feeling unloved and not beautiful simply because of the variance in their brown skin.

‘You’re cute to be dark’

I remember the first time I heard someone say this to me. I was 15. A light-skinned young man told me and one of my close friends who also has brown skin that we were “lucky” because we were “cute to be dark.”

My mouth dropped open when I heard those words. I guess I had never really thought about the fact that I was a dark-skinned girl. Was it because I did not have the darkest skin? My skin is a solid brown, and there are many tones darker than my own. Perhaps I was just color blind. Or, most likely, maybe it was because I had never looked at my dark skin as being something that was “less than” or not attractive.

When I was a little girl, I always felt pretty. My parents and other people always told me how beautiful I was — and they left out the whole “to be dark” thing. But I believe that I became more socially aware of my dark skin after this experience.

I began to wonder if other people saw me that way — “lucky” to be cute despite having dark skin. I wondered if my dark-skinned friends felt that they weren’t cute, or felt lucky if they were. I became very aware of my dark skin, but I never doubted that it was beautiful.

Maybe I was privileged. I lived in a home where there was a range of skin complexions, from light to very dark. My mom has a light complexion, while my dad has a solid dark mahogany complexion. People often referred to him as “black” or “dark.” My sister and I scored somewhere in the middle of the two, so I suppose my mother was the oddball in our house.

After that day with my friends, something else happened to me. I started to pay attention to other people’s thought processes and actions in relation to skin complexion. I started to notice that people to whom I was really close had those same feelings. I felt cheated that, all of this time, I had been left in the dark on this thing that apparently I was a part of and did not realize.

Because of the preferential treatment that African Americans with light skin received from both blacks and whites, it conveyed the message that the more blacks conformed to white attributes, the better their lives would be. How can we expect our children to go out in the world and be confident of their worth when we secretly or, in some cases, not so secretly hold such a negative view of black beauty? From straightening our hair and bleaching our skin to wearing hair weaves and colored contact lenses, many of us are guilty of rejecting our natural black selves in an attempt to conform to mainstream society. My fear is that this has a very harmful impact on the mental health of young black girls.

The media plays a critical role in representing society’s view of beauty. As a young girl, I do not remember many famous black women who were on television AND represented in a respectful way. And to go one step further, a black woman on television with dark skin was rare (if she even existed).

I loved playing with my dolls, but I did notice one thing: My dolls did not look like me. My Barbie was white, as were most of my baby dolls. At the time, I did not understand that this could have an effect on me someday. Kenneth and Mamie Clark’s 1947 study found that black children preferred white dolls over black dolls. This study conveyed the message that blacks had a poor acceptance of the black dolls.

When I watch movies, television and music videos, I see black women represented in an undesirable way. I see dark girls represented in an even worse way. I notice that the dark-toned girl is the prostitute, the mistress, the whore, the hypersexual friend, and she’s single. The light-skinned girl is the wife, the main girlfriend, the most wanted and desirable by men. This sends very mixed messages to young black girls.

Black girls struggle within their own communities, their own schools and even their own homes. I once sat with my younger brother and his friends, all of who were between the ages of 10-14. I asked these boys their views on beauty and skin complexion. The darkest boys in the crowd stated that a pretty girl has light skin and long hair. The boys with lighter skin said that her complexion didn’t matter. Does that experience represent how boys and girls in our society as a whole view dark skin?

What I believe is interesting is that the experiences that occur within black culture are a complete replica of white privilege. Some light-skinned African Americans are very aware of their privilege but feel guilty about it because it was not something that they chose. Others use their privilege to their advantage. I have met very bold individuals who will say that, yes, they are more attractive because their skin is light. 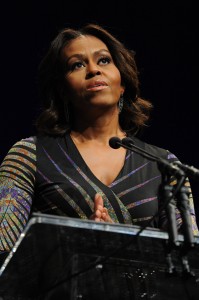 I realize now that, as an adult with dark brown skin, mainstream society still questions my beauty. I realize there are many girls who suffer and feel unattractive, especially in comparison with someone who has lighter skin. I realize the variation of skin tone for these young girls does not matter — lighter is better. I realize that some young girl watches television every day waiting to see a beautiful and famous girl with dark skin like herself. I realize that it is women such as Michelle Obama, Tika Sumpter, Gabrielle Union and Kelly Rowland, to name a few, who give dark girls hope of being viewed as beautiful. I realize that although I did not struggle with my dark skin, many girls do. I realize that this is something that needs to be addressed, especially in our own black communities.

Mashone Parker is an assistant professor at Purdue University-Calumet. She teaches in the counseling and development program within the College of Education. Contact her at mashone.parker@purduecal.edu.