Playing football in the National Football League (NFL) is not a career, it’s an experience, said Dwight Hollier, a former NFL linebacker who became a licensed professional counselor (LPC) after his playing days were over.

This lesson – one that took Hollier years to learn – is part of the message that he is working to spread throughout the NFL as part of the league’s new total wellness initiative.

The average player spends three and a half years in the NFL, according to Hollier. For players who 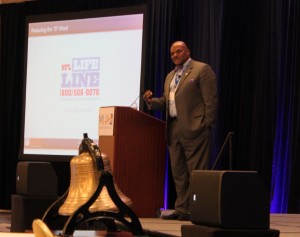 Dwight Hollier, a licensed professional counselor and the NFL’s director of transition and clinical services, speaks at Mental Health America’s annual conference this month in Alexandria, Virginia. (Photo by B. Bray/Counseling Today)

are drafted out of college, that average jumps to six years. Either way, it’s not a long time, said Hollier, who returned to the NFL in 2012 as director of transition and clinical services.

Hollier, speaking earlier this month at Mental Health America’s annual conference in Alexandria, Virginia, said he became depressed after retiring from playing in 2000. For a couple of years, he even stopped watching the sport he had loved since childhood.

“I didn’t know who I was without what I did,” said Hollier, who played eight years with the Miami Dolphins and one year with the Indianapolis Colts after starring in college at the University of North Carolina. “I would go cut the grass on Sundays [when NFL games were televised]. We had a very nice lawn at that time,” he said with a chuckle.

Today, Hollier is part of the NFL’s effort to support current and former players and their families off the field with everything from mental health issues and family relationships to adjusting to life after leaving the league.

“If you’ve been the best in the world at whatever you do, and then someone says you can’t do it anymore [because of injury, age or other reasons], that will affect you,” said Hollier, who previously worked as a licensed counselor in private practice before going to work for the NFL.

“‘No, we don’t talk about that’ – that’s they way a lot of us were raised,” said Hollier. “This [total wellness program] gives us a platform to have important discussions. … These guys are more likely to listen to someone who has worn the boots [played football professionally].”

Part of the challenge is changing the “play through the pain” mentality that can permeate football, from professional players all the way down through the youth leagues. As a child, Hollier says he remembers being told to “suck it up” to keep others from seeing weakness or pain.

“If you hear that all the time, it becomes your modus operandi,” he said. “You internalize it, and it makes it more difficult to reach out for help.” 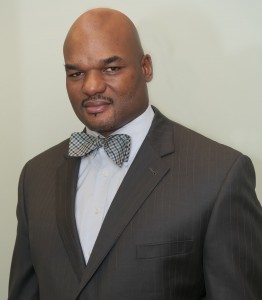 Hollier is a graduate of the University of North Carolina at Chapel Hill with a dual degree in psychology and speech communication. He earned a master’s degree in mental health counseling from Nova Southeastern University in Davie, Florida, while playing linebacker for the Miami Dolphins. Prior to joining the NFL, Hollier worked with athletes and other individuals at Mind Over Body at Southeast Psych, a private practice in Charlotte, North Carolina.

Q+A with the NFL’s Dwight Hollier

Counseling Today: What made you decide to become a counselor?

Dwight Hollier: I think I was always a good listener growing up. I also know that my parents were giving people. We didn’t have a lot growing up, but we always had room for others. I have three siblings, but there were times where we had three or four other family members living with us. That spirit of giving and helping has stuck with me even to this day. I have to give my parents a lot of credit for the counseling spirit.

CT: You worked on your master’s degree in counseling while you played for the Miami Dolphins. Talk about how you decided on your post-playing vocation while still playing in the NFL.

DH: My undergraduate degree was speech communications and psychology. Psychology connected with me in a way speech communications did not, but I didn’t initially make the connection. When I was in my sixth year in the league, my teammates started calling me the “old dude” in the locker room, which really made me think that I probably needed to figure out what I was going to do next. I was only 27 or 28, but I had already beaten the odds, and I knew I should start exploring my life after football.

Fortunately, the Miami Dolphins training camp is located next to the Nova Southeastern University campus, and they had a fantastic counseling psychology program. I initially took a couple of classes to see if I could handle the workload. My coach at the time, Jimmy Johnson, and the rest of the coaching staff were really supportive, which allowed me to confidently pursue this degree. The program spoke to me right away, and I poured myself into being successful in both and was able to graduate in April of 2000, before playing my last season with the Indianapolis Colts.

CT: Could you talk about the counseling work you did before working for the NFL? Do you have a specialty?

DH: My initial practicum work was at a family violence center, where I worked with perpetrators and victims of abuse. The majority of my experience has been working with older adolescents and young adults around a variety of mental health issues. In my last couple of years of private practice, I did a lot of work with athletes around transition and adjustment challenges. I have worked as a foster care program manager, group home adviser, school social worker and football coach. All of these experiences helped shape the person I am today.

CT: Can you elaborate on what you do as director of transition and clinical services with the NFL?

DH: In my current role, I work with a great team of individuals in the Player Engagement Department to develop and implement psychoeducational programs for our NFL family to assist with success on and beyond the field. I also collaborate with our clinical partners to make sure we have the right wellness resources in place to assist players and their families.

CT: What made you want to get involved in this way?

DH: Some would say that I did a lot of things right in preparing for my transition, and I would agree. But I also know how difficult my transition was, even though I [had] put a lot of pieces in place. I know that there are a lot of men and families who have had a much shorter NFL experience and some who haven’t finished their undergraduate degree. This role is an opportunity to serve those men and their families and assist in smoothing out their transition in and out of the NFL.

CT: How do you use your counselor training and skills in this role?

DH: One of the main tools any counseling professional needs is unconditional positive regard and listening skills. Part of my role is listening and working to identify the needs of our population and working collaboratively to find the right resources.

CT: Why do you think your position is needed in the NFL?

DH: I believe all industries could use a sharper focus on wellness and the potential clinical needs of their workforce. I am blessed to have this opportunity.

CT: As an NFL insider, what would you want counselors who work with clients for whom professional football plays a prominent part or influence in their lives — devotion to a team, spending many hours watching games, etc. — to know?

DH: I think it is important to leave their assumptions and biases at the door. Cultural competency will play a big role as well. Because of the high profile of the NFL, our men and their families are easily stereotyped. The reality is that our men and families come from a variety of backgrounds and experiences, and each should be treated as such. One bad experience with a counselor who doesn’t understand the culture could mean that this person never returns for the assistance he needs and potentially discourages others.

CT: Do you think there is more focus today on the mental health and wellness needs of professional athletes than when you were a player?

DH: In general, mental health awareness is much more prevalent than it was in the 1990s and early 2000s when I played. We have been much more intentional with addressing the stigma around mental health with our population. I also think that this generation is more aware and accepting of mental health issues and resources.

CT: What advice would you give to counselors who want to get involved with high-level athletes? Where or how could counselors be a help?

DH: I think it is important to learn as much as you can about athletes and the needs of athletes. There are great sports counseling and sports psychology programs out there that can help add a level of expertise to working with this population. 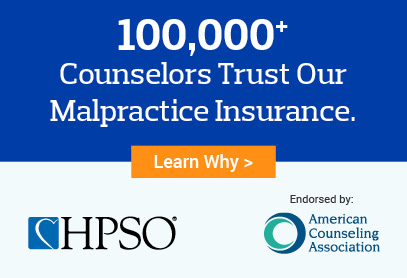