More Americans died from drug overdoses in 2014 than in any previous year on record.

The 2014 statistics, released last month, indicate that U.S. drug overdose deaths have reached an epidemic level, according to the U.S. Centers for Disease Control and Prevention (CDC).

Deaths from opioid overdoses, which include prescription painkillers as well as heroin, increased 14 percent from 2013 to 2014. Heroin overdose deaths rose by 26 percent. The CDC reports that the rate of overall opioid overdoses in the United States has tripled since 2000.

Overall, drug overdose deaths increased from 2013 to 2014 in both men and women, in non-Hispanic whites and blacks, and across all adult age groups, according to the CDC’s Morbidity and Mortality Weekly Report.

“The sharp increase in deaths involving synthetic opioids, other than methadone, in 2014 coincided with law enforcement reports of increased availability of illicitly manufactured fentanyl, a synthetic opioid; however, illicitly manufactured fentanyl cannot be distinguished from prescription fentanyl in death certificate data,” writes the CDC. “These findings indicate that the opioid overdose epidemic is worsening. There is a need for continued action to prevent opioid abuse, dependence and death, improve treatment capacity for opioid use disorders and reduce the supply of illicit opioids, particularly heroin and illicit fentanyl.” 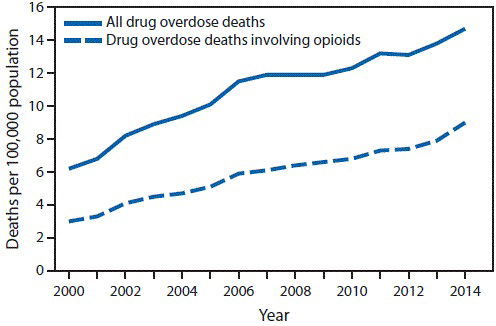 Graphic via the U.S. Centers for Disease Control and Prevention.

For more details, and a state-by-state breakdown of data, see the CDC’s Morbidity and Mortality Weekly Report.

For counselor resources on addiction, visit the International Association of Addictions and Offender Counselors, a division of the American Counseling Association, at iaaoc.org

Related reading: See a review of the book From the Needle to the Grave: My Sister’s Journey With Heroin Addiction as Told Through Her Journals at CT Online: wp.me/p2BxKN-423