Silken Laumann is a world-class rower and three-time Olympic medalist. But she says that isn’t the hardest and most important work she has done in her life.

“The most incredible journey I’ve been on is the internal one – the journey of the soul,” says Laumann, a Canadian author, speaker and advocate. “It takes courage to become who you really 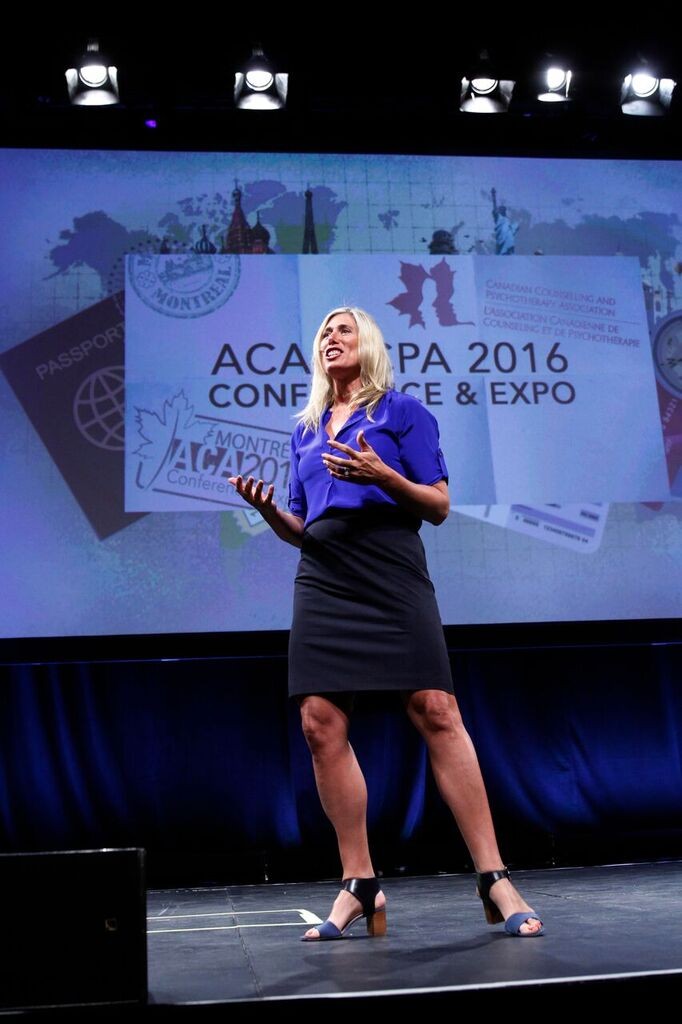 are. … We are given the opportunity to go deep within ourselves. It’s the greatest opportunity we can ever take.”

Laumann shared her story with approximately 2,500 professional counselors in a heartfelt keynote address this morning at the American Counseling Association Conference & Expo in Montréal.

Laumann became a household name in Canada — and, for many Canadians, the very embodiment of courage — when she overcame a severe injury to win a bronze medal in single sculls at the 1992 Olympic Games in Barcelona. Ten weeks before the Olympics, Laumann’s leg was shattered when another sculling boat collided with hers during a warm-up run.

In addition to her comeback win in 1992, Laumann had previously won a bronze medal in double sculls at the 1984 Olympics in Los Angeles and would go on to win a silver medal in single sculls at the 1996 Olympics in Atlanta. She was also chosen to carry Canada’s flag during the closing ceremonies of the 1992 games.

In this morning’s keynote, Laumann was open about her struggles with anxiety and depression, which she treats with a combination of medication and counseling.

After her Olympic days were over, she led a life that, from the outside, looked like she had it all together as a mother and public persona, Laumann says.

However, “there were some signs that all was not well in my little perfect world,” she says. “In my life, at that time, help was for people with bigger problems – weaker people. Boy, did I have a lot to learn.”

It was a counselor, Laumann says, who pulled her from rock bottom — a crisis moment years ago when she was harboring so much internal rage that she had thoughts about lashing out and harming her children during a moment of uncontrolled anger.

Laumann says counseling gave her the confidence to eventually be (and show compassion for) her authentic self rather than trying to guard and live up to her polished public persona. Counseling also helped her come to terms with her story, including her troubled childhood, and learn to heal, she says. 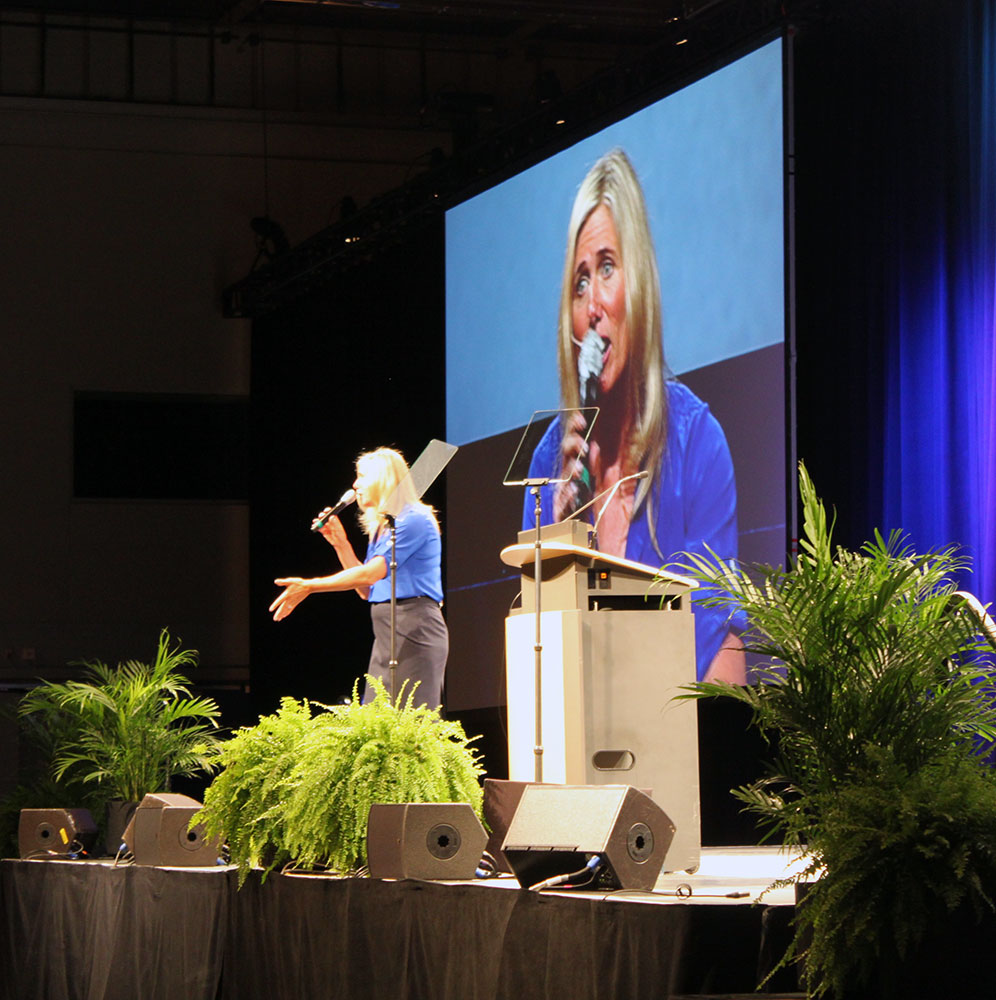 was unpredictable and threatening at times – “wasn’t right,” she says. But it didn’t fully click until her counselor asked her how she would feel if her own daughter, Kate, was in that situation.

Finding self-compassion and love for her authentic self “transformed everything,” including her relationship with her children, Laumann says.

“My kids have an authentic person [for a mother] now,” she says. “I felt like I was putting on the mask of a mother [before].”

Laumann credited counseling with breaking the cycle of abuse that runs in her family. What if a counselor had not been there at her rock-bottom moment, she asked the audience of counselors.

“I am deeply grateful for this profession,” Laumann told the crowd. “We need to make counseling available to everyone who needs it.”

Laumann represented Canada for 13 years in international competitions and was inducted into Canada’s Sports Hall of Fame in 1998.

She is married with four children, including a stepdaughter, Kilee, who is profoundly autistic. In addition to participating in author events and speaking engagements, Laumann engages in a significant amount of advocacy work, including fundraising for autism causes with her husband, David Patchell-Evans.

After her keynote, Laumann met with counselors and signed copies of her 2014 memoir, Unsinkable.

Learn more about Silken Laumann and her advocacy work at silkenlaumann.com

ACA’s 2016 conference, held in partnership with the Canadian Counselling and Psychotherapy Association, runs through April 3.

Interested in Live Streaming the 2016 Conference to earn 15 CEs? Go to counseling.org/conference/montreal-aca-2016/livestreaming 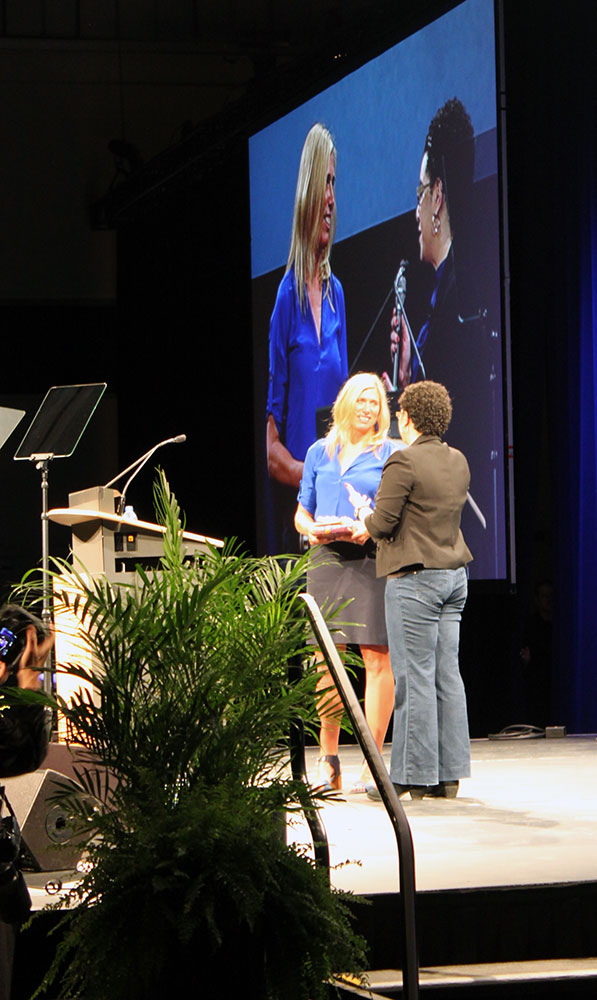 Silken Laumann receives a thank you gift from Natasha Caverley, president of the Canadian Counselling and Psychotherapy Association (CCPA), after her keynote on April 2. Photo by Bethany Bray/Counseling Today