Picturing brain chemistry can be something like picturing a hurricane. Although we can imagine bad weather, it is difficult to imagine changing that weather. But Stephen Porges’ polyvagal theory gives counselors a useful picture of the nervous system that can guide us in our efforts 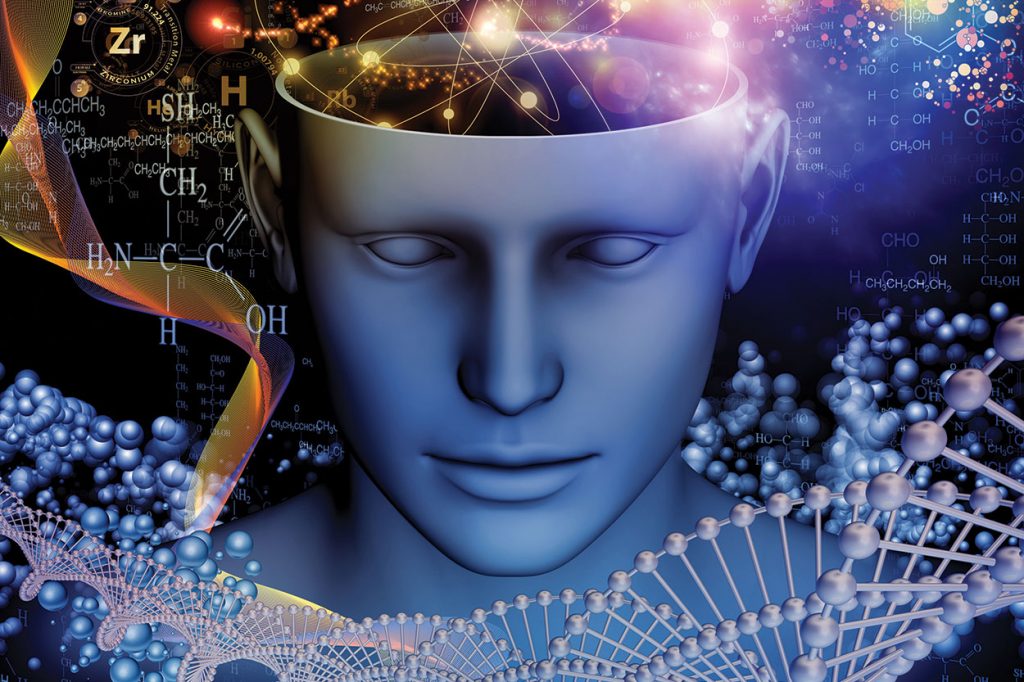 The two other parts of our nervous system function to help us manage life-threatening situations. Most counselors are already familiar with the two defense mechanisms triggered by these two parts of the nervous system: sympathetic fight-or-flight and parasympathetic shutdown, sometimes called freeze-or-faint. Use of our social engagement system, on the other hand, requires a sense of safety.

Polyvagal theory helps us understand that both branches of the vagus nerve calm the body, but they do so in different ways. Shutdown, or freeze-or-faint, occurs through the dorsal branch of the vagus nerve. This reaction can feel like the fatigued muscles and lightheadedness of a bad flu. When the dorsal vagal nerve shuts down the body, it can move us into immobility or dissociation. In addition to affecting the heart and lungs, the dorsal branch affects body functioning below the diaphragm and is involved in digestive issues.

The ventral branch of the vagal nerve affects body functioning above the diaphragm. This is the branch that serves the social engagement system. The ventral vagal nerve dampens the body’s regularly active state. Picture controlling a horse as you ride it back to the stable. You would continue to pull back on and release the reins in nuanced ways to ensure that the horse maintains an appropriate speed. Likewise, the ventral vagal nerve allows activation in a nuanced way, thus offering a different quality than sympathetic activation.

Ventral vagal release into activity takes milliseconds, whereas sympathetic activation takes seconds and involves various chemical reactions that are akin to losing the horse’s reins. In addition, once the fight-or-flight chemical reactions have begun, it can take our bodies 10–20 minutes to return to our pre-fight/pre-flight state. Ventral vagal release into activity does not involve these sorts of chemical reactions. Therefore, we can make quicker adjustments between activation and calming, similar to what we can do when we use the reins to control the horse.

If you go to a dog park, you will see certain dogs that are afraid. They exhibit fight-or-flight behaviors. Other dogs will signal a wish to play. This signaling often takes the form that we humans hijacked for the downward-facing-dog pose in yoga. When a dog gives this signal, it cues a level of arousal that can be intense. However, this playful energy has a very different spirit than the intensity of fight-or-flight behaviors. This playful spirit characterizes the social engagement system. When we experience our environment as safe, we operate from our social engagement system.

If we have unresolved trauma in our past, we may live in a version of perpetual fight-or-flight. We may be able to channel this fight-or-flight anxiety into activities such as cleaning the house, raking the leaves or working out at the gym, but these activities will have a different feel than they would if they were done with social engagement biology (think “Whistle While You Work”).

For some trauma survivors, no activity successfully channels their fight-or-flight sensations. As a result, they feel trapped and their bodies shut down. These clients may live in a version of perpetual shutdown.

Peter Levine, a longtime friend and colleague of Porges, has studied the shutdown response through animal observations and bodywork with clients. In Waking the Tiger: Healing Trauma, he explains that emerging from shutdown requires a shudder or shake to discharge suspended fight-or-flight energy. In a life-threatening situation, if we have shutdown and an opportunity for active survival presents itself, we can wake ourselves up. As counselors, we might recognize this shift from shutdown to fight-or-flight in a client’s move from depression into anxiety.

But how can we help our clients move into their social engagement biology? If clients live in a more dissociative, depressed, shutdown manner, we must help them shift temporarily into fight-or-flight. As clients experience fight-or-flight intensity, we must then help them find a sense of safety. When they can sense that they are safe, they can shift into their social engagement system.

The body-awareness techniques that are part of cognitive behavior therapy (CBT) and dialectical behavior therapy (DBT) can help clients move out of dissociative, shutdown responses by encouraging them to become more embodied. When clients are more present in their bodies and better able to attend to momentary muscular tension, they can wake up from a shutdown response. As clients activate out of shutdown and shift toward fight-or-flight sensations, the thought-restructuring techniques that are also part of CBT and DBT can teach clients to evaluate their safety more accurately. Reflective listening techniques can help clients feel a connection with their counselors. This makes it possible for these clients to feel safe enough to shift into social engagement biology.

Porges chose the name social engagement system because the ventral vagal nerve affects the middle ear, which filters out background noises to make it easier to hear the human voice. It also affects facial muscles and thus the ability to make communicative facial expressions. Finally, it affects the larynx and thus vocal tone and vocal patterning, helping humans create sounds that soothe one another.

Since publishing The Polyvagal Theory: Neurophysiological Foundations of Emotions, Attachment, Communication and Self-Regulation in 2011, Porges has studied the use of sound modulation to 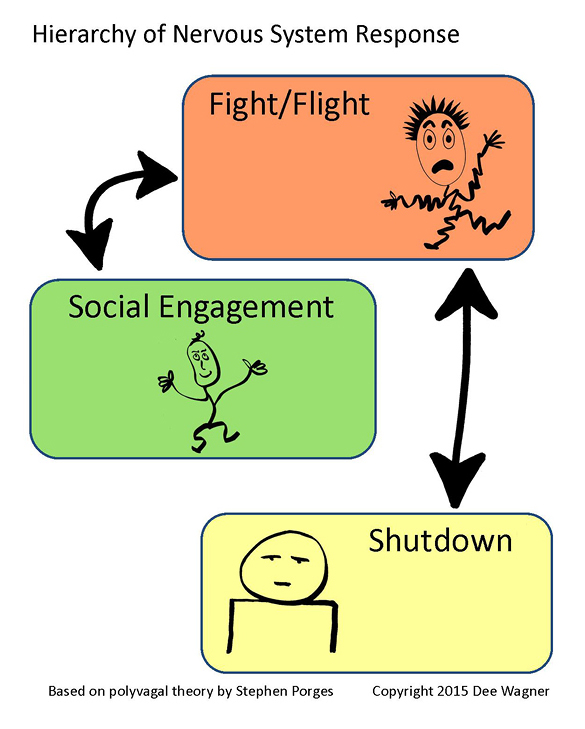 train middle-ear muscles. Clients with poor social engagement system functioning may have inner ear difficulties that make it hard for them to receive soothing from others’ voices. As counselors, we can be conscious of our vocal patterns and facial expressions and curious about the effects those aspects of our communication have on our clients.

Based on his understanding of the effects of the vagus nerve, Porges notes that extending exhales longer than inhales for a period of time activates the parasympathetic nervous system. Porges was a clarinet player in his youth and remembers the effect of the breath patterns required to play that instrument.

As a dance therapist, I am aware that extending exhales helps clients who are stuck in forms of fight-or-flight response to move into a sense of safety. For clients stuck in some form of shutdown, I have found that conscious breath work can stir the fight-or-flight response. When this occurs, the fight-or-flight energy needs to be discharged through movement for clients to find a sense of safety. For instance, these clients might need to run in place or punch a pillow. The hierarchy of defense system functioning explains these therapeutic techniques.

Respiratory sinus arrhythmia is a good index of ventral vagal functioning. This means we now have methods to study the effectiveness of body therapies and expressive arts therapies.

Polyvagal theory in my practice

What follows is an example of how I used polyvagal theory with a client who experienced medical trauma during her birth.

The client, whom I have been seeing for some time, described feeling very sleepy and acknowledged having difficulty getting to our session on this day. Her psychiatrist had prescribed her Zoloft as a way of treating anxiety stirred by the birth of her daughter’s first child. The client and I had previously normalized her anxiety as a trauma response.

During the years before coming to see me, this client had attempted suicide, which resulted in medical procedures that added to her trauma. Through our work, she has come to understand that the panic attacks she has when in contained situations are also trauma responses. She has lived much of her life in perpetual fight-or-flight response mode.

On this day, she was relieved to be less emotional, but she feared the tiredness that accompanied Zoloft’s help in calming her fight-or-flight sensations. I saw this fear of the tiredness as a fear of dorsal vagal shutdown. We discussed the possibility that this tiredness could allow her a new kind of activation. I asked if she would like to do some expressive art that would allow gentle, expressive movement. She shuddered, naming her preference for things that were less subjective.

We talked about the existence of a kind of aliveness that still feels safe. We talked about the possibility of existing in a playful place in which there is no right and wrong, only preference. We acknowledged that since her birth, she and her parents had feared that her health would fail again. This environment in which she had grown up had supported nervous system functioning designed for life-threatening situations. With the Zoloft calming her fight-or-flight activation, I suggested that perhaps she could explore some calmer, more playful kinds of subjective experiences.

“It feels like you are trying to create a different me,” she responded. I acknowledged that it might sound as if I were thinking she could be someone she wasn’t. But I explained that what I was actually suggesting was the possibility that she could be herself in a different way.

The client told me she had a new book on grandparenting that contained a chapter on play. She said she would consider reading it. At the same time, she said that she might not be able to tolerate the Zoloft and might have to get off of it. Regardless, the idea of this different, more playful way of being has been introduced to her and, for a moment or two, experienced.

As counselors armed with polyvagal theory, we can picture defense mechanism hierarchy. We can recognize shifts from fight-or-flight to shutdown when clients feel trapped. We can also recognize the movement from shutdown into fight-or-flight that offers a possible shift into social engagement biology if and when the client can gain a sense of safety.

Before polyvagal theory, most counselors could probably recognize fight-or-flight and shutdown behaviors. They could probably sense a difference between defense responses designed for life-threatening situations and responses that characterize what Porges calls the social engagement system. Polyvagal theory deepens that awareness with the knowledge that playful arousal and restorative surrender have a unique nervous system influence.

Most counselors appreciate brain science but may find it difficult to picture how to use the information. Thanks to polyvagal theory’s clarification of the role of the ventral branch of the vagus nerve, we now have a map to guide us.

Dee Wagner has worked as a licensed professional counselor and board-certified dance therapist at The Link Counseling Center in Atlanta for 22 years.
Her book/workbook Naked Online: A DoZen Ways to Grow From Internet Dating helps clients use their online dating experiences to shift from attachment trauma to social engagement system functioning. Contact her at mdeewag@gmail.com.