Counselors around the world have more in common than you might think.

Angela Coker, an associate professor at the University of Missouri – St. Louis (UMSL), found herself talking about some very familiar issues with international colleagues recently at a conference in Bangalore, India. Challenges that American counselors face – workload, pay rate and questions of counselor identity – are the same for colleagues around the world.

“In interacting with many of the counselors I met at the conference, [I found that] the issue of professional identity of counselors is a worldwide issue. I met a counselor from the U.K. who talked about how most people don’t know what a counselor is, or what we do,” says Coker, a licensed professional counselor (LPC). “It really just hit home again that most people don’t know … We have a lot of work to do, in terms of educating people who we are.”

Coker and Sachin Jain, an LPC and associate director of Counselors Without Borders, led a group of six masters-level graduate students from UMSL and George Mason University to India in January. The group attended and presented at the International Counselling, Psychotherapy and Wellness Conference at Christ University in Bangalore.

Many of the students who went on the 10-day trip said the experience spurred both personal and professional growth; for one student, it also allowed her to overcome past trauma she associated with Indian culture (see sidebar, below).

The conference, jointly organized by Christ University and the University of Toronto, was a gathering of university educators and professionals from around the world. While on the Christ University campus, the group was able to interact and share meals with Indian counseling students.

George Mason student Alexander Hilert remembers this experience as a highlight of the trip.

“I found a great deal of similarity between myself and the (Indian) students, sharing their motivations and aspirations for making a difference and helping others,” says Hilert.

Jain has been leading groups of counselor educators and students on professional work/study trips to his native India for years, including a meeting with the Dalai Lama in 2013. This time, the trek was a chance for students to present at an academic conference, as well as be exposed to culture and perspectives they might be missing in an American graduate program, he says. In India, there is a shortage of mental and physical healthcare, while the needs are great – due to stressors such as poverty, class struggles, rampant corruption and high rates of suicide, says Jain.

“Students are the future leaders for the field. But their [American] training explicitly does not identify the most vulnerable populations living in developing countries, [which] severely limits advocacy and social justice efforts,” says Jain. “My hope is that some of these students return back to India or other developing countries to serve.”

Coker agreed, saying the trip was a chance to “expose some of our students to international thinking.”

“The whole purpose of this trip was international immersion and to increase multicultural consciousness,” Coker says. “A person can get a whole PhD (in the U.S.) without reading a text by anyone who isn’t an American, which I think is crazy.”

Here are some thoughts from the counseling graduate students who traveled to India this winter:

“Deciding to make the trip to India was a very challenging decision for me to make personally. Not just because of logistics or the fact I had never been out of the country before but because I had a traumatic experience when I was 14 years old when a man who was from India sexually assaulted me. In court he used his cultural background as a defense. At a young age I became fearful of Indian culture, believing his words that his actions were considered normal in his country. From that point forward I generalized and shied away from the culture; India was one country I told myself I would never visit in my lifetime.

When I first learned about the opportunity to travel to India I knew it was a wonderful opportunity, but it was just something I told myself I could not do. Over the next several months I did a lot of self-reflection. When the day came that I got the email announcing the trip I decided in that moment, YES, I was going. It was the perfect time for me in my personal journey towards healing and growth and I just knew it was something I had to do and I would forever regret passing on this opportunity. I sought out supervision from my supervisors and professors; they were all very encouraging and gave me some tools and coping skills to help me on my journey.

One moment in particular was monumental for my personal growth. There was a cultural (dance) performance I was able to witness and I was in complete awe as the group started to perform. It was breathtakingly beautiful and I found myself tearing up. This was a culture I feared for so long, a culture I shied away from, and in that moment I felt genuine appreciation and admiration as I watched this performance and I felt myself take a huge step towards my recovery.

Being immersed into a culture is completely different than reading about it in a textbook or watching a movie. Being able to experience the sights, sounds, tastes and feel of a culture brings my understanding of cultural awareness to a completely different level. By personally overcoming my fears and biases held from a traumatic experience in my youth and by witnessing firsthand the struggles of poverty, racism and cultural norms I know I will be better equipped personally and professionally as a multicultural and social justice [focused] counselor.”

“The highlight of the trip for me was attending class and meeting the counseling graduate students at Christ University. This gave me the opportunity [to] see how counseling theory was taught there. For example, mindfulness-based therapy was being taught from a broader cultural and historical perspective. We discussed parallels between our training and perspectives as counselors (there was a great deal of overlap) and learned about the challenges counselors face in promoting the mental health profession in India. I found a great deal of similarity between myself and the students, sharing their motivations and aspirations for making a difference and helping others.

Something critical I learned about myself was how I react to being in an unfamiliar environment culturally. Thankfully I was supported by Dr. Sachin Jain and the students and faculty at Christ. But I think it will help me moving forward, having more empathy for clients navigating culturally unfamiliar environments. I also realize the difference race, gender, ethnicity, religion, disability, sexuality and socioeconomic status play in terms of this experience and the treatment you receive. I would say I’m learning to keep these factors in mind in how I relate to others and the stand I take for social justice.

I think my struggle and ‘aha moment’ was learning to be more present and open-minded. In my mind this is what makes cross-cultural dialogue possible and where the learning occurs.” 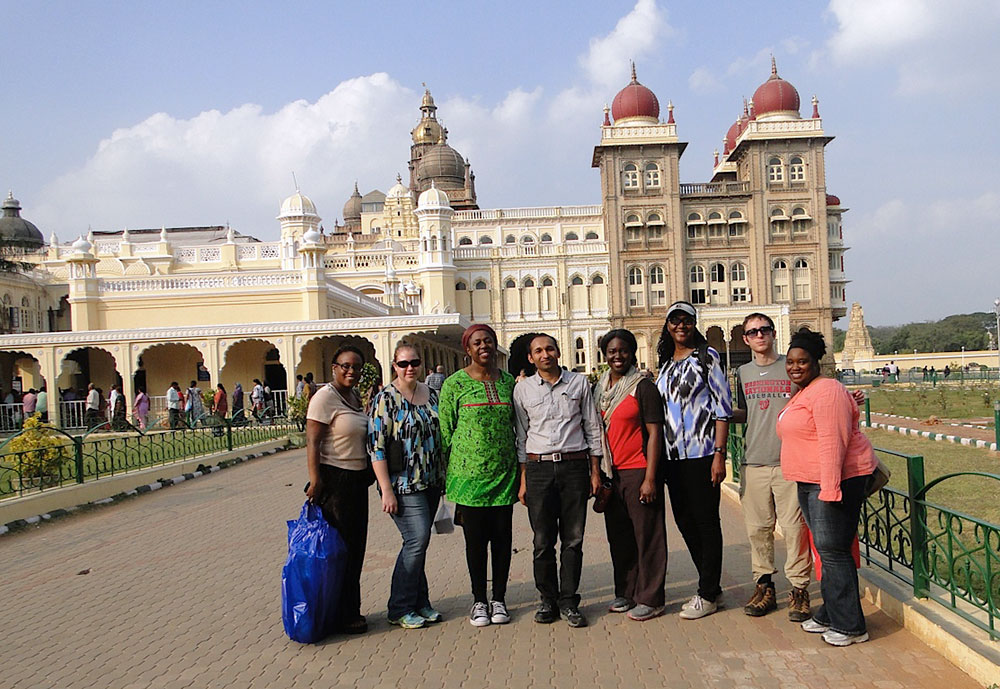 “My trip to India was nothing short of miraculous. I met so many wonderful people during my visit. I was first struck by the noise, dirt, trash and amount of people on the streets at any given time. However, I became so entranced by [the] life I saw on a daily basis. The people were so colorful, energetic and full of life. I was shocked to notice how prevalent colorism was in the country. I noticed most, if not all of the skincare products had bleaching cream, and I felt sad. I felt sad because I began making direct parallels between the people of India and Black/African-Americans and how colorism has affected us. I became very close with a young Indian woman; she explained it this way: ‘families want their daughters to marry men of European decent to have fairer children and grandchildren.’ I’m so thankful for this opportunity, and have used it to help me grow while working with international people during my internship. When working with [clients] I will be aware of similarities that different cultures share and use what I have learned to be the best professional counselor I can be. My [Indian] friend and I have kept in touch since my return to the U.S., and our friendship is growing. I’ve been invited to her wedding and we speak weekly. I wouldn’t trade my time in India for the world, and I can’t wait to return!”

“While I had no clear or definite expectations for our trip to India, admittedly, some of my experiences surprised me. My most significant personal reflection is the feeling of Otherness I had while there. That is to say, I felt a different type of ‘other’ than I feel when I am at home in the U.S. As an African-American woman, I am very experienced with being a minority or being viewed as atypical to my surroundings, however, my India experience gave it a different flavor. Not only was I, and a few of my peers, atypical, we broached on the verge of being novelty. Public response to our presence varied from discreet stares and pointing to requests for pictures and being followed by groups of schoolchildren on a field trip. While it did not feel rude, it definitely felt strange, as if I were suddenly under the scrutiny of standards I did not know or understand. As a result, I had a sense of vulnerability throughout my trip, though not feeling unsafe, just uncertainty about where I stood in the grand scheme.

Understanding social justice, multiculturalism and the multiple forms of oppression is essential for every counselor and counseling student because these issues are relevant all over the world. Bangalore, as one of the fastest growing cities in India, must handle issues with pollution, construction and other logistical and socioeconomic problems. For example, the city had some of the busiest and congested traffic I had ever witnessed, but I did not observe many pedestrian crosswalks, despite seeing numerous construction projects in progress. How do these things affect the disabled? The ill? The elderly? As counselors, we must be aware of the wants, needs and obstacles of the minority as well as the majority.

Another area of interest that I observed in India was the standards of beauty promoted by the media. My first observation was that the individuals featured did not match [or] reflect the features of general populace. While somewhat expected, the extent of these differences were sometimes surprising with some models even appearing to have significant European heritage vs. Indian/Asian heritage. Most of the ad models had light eyes, narrow noses and lighter or olive tone skin, while most of the residents in the city did not. Furthermore, many beauty products were promoted as a means of obtaining these features. All throughout the city, we saw billboards for plastic surgery, cosmetic procedures and products, including numerous ads for skin whitening cream. As counselors, we should ask the following questions: How do standards like these affect a culture? How can we understand –isms (such as racism, colorism, sexism, etc.) in a different cultural context than our own?”