“There is no excuse for our society’s not putting scientific knowledge into practical use. … We must remember — the first few months of life are not a rehearsal. This is the real show.” — Irving B. Harris

A casual conversation on any given day:

“Oh, you’re a counselor! For what ages? I have this friend who …”

Me: “I work with infants and young children. I specialize in infant mental health.”

“Infant mental health? Like counseling babies? Ha! Do they lie on your couch?”

Me: “Yes, I do counseling with infants and their caregivers. Actually, what happens to infants in the first few years of life can have a big impact on their future development. The babies don’t lie on a couch and tell me their feelings, but they do have social and emotional needs.”

“Huh, who knew? So how do you do counseling with a baby?”

As the collective knowledge of child development and neuroscience expanded on the British researchers’ foundational work, the infant mental health movement grew stronger and spread throughout the world. Rigorous empirical studies from interdisciplinary groups of researchers conclusively determined that what happens in an infant’s early life can have a profound impact on his or her adult development.

There are several core concepts in infant mental health that come from decades of research and inform our practices. First, neuroscientists have discovered that an infant’s brain grows remarkably fast in the first few years of life, making an estimated 700-1,000 new neural connections every second. Pat Levitt, science director of the National Scientific Council on the Developing Child, summarized thousands of studies on brain plasticity into one graph to show how adaptable a young child’s brain is to growth experiences in the first few years of life.

These findings propelled the early intervention movement, a service for children ages birth to 3 years with identified developmental delays. Infant mental health providers of all disciplines, including speech and language therapists, physical and occupational therapists, counselors and pediatricians, found that they could make huge developmental gains for an infant with developmental delays if they could provide their intervention services during the infant’s first few years of life. Getting these services early better prepared the infant for later academic and social success. 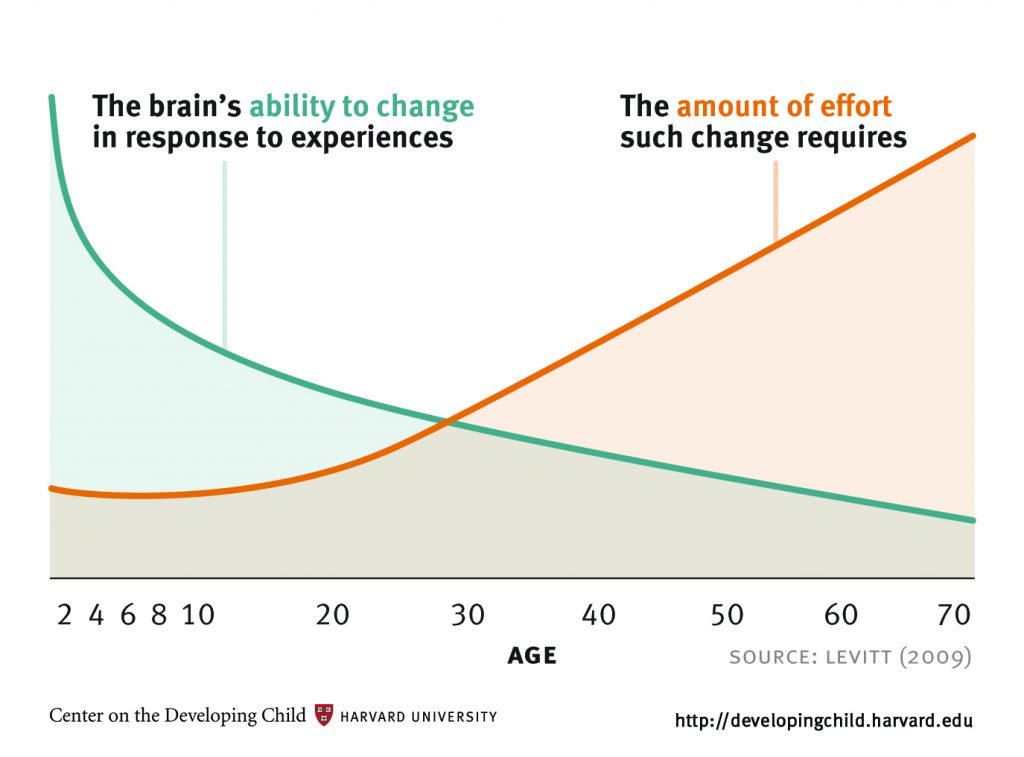 For example, when I was a school counselor in an elementary school, I was responsible for coordinating the arrival of several new kindergartners who had received early intervention services as toddlers and preschoolers. Throughout the summer, I read their Individualized Education Programs and histories and knew what their educational and social goals were. I felt like I knew these children already, so when school started, I assumed I would be able to go to their kindergarten classrooms, identify these children and see how they were doing. When I arrived, however, I could not pick the identified children out from all the other new kindergartners in the classroom. I had to ask the teacher and double-check my list. The children were doing amazingly well.

Those students who had received early intervention services continued to thrive throughout their time in my elementary school. Interestingly, the kindergartners who arrived without any history of early intervention services, but later were determined to have emotional, social or other developmental delays, were the students who struggled the most during their elementary school years.

I had learned, firsthand, how early intervention services could harness the power of the developing brain during a child’s first few years of life and how children who had missed that opportunity for early intervention took much, much longer to catch up.

A second core concept in infant mental health involves the research finding that infants develop in their relationships with their caregivers, including parents, foster parents, adoptive parents and child care providers. In 1947, Winnicott famously said, “There is no such thing as a baby. … If you set out to describe a baby, you will find you are describing a baby and someone.”

In other words, to learn, grow and thrive, infants must depend on their caregivers. Without a caregiver’s consistent, sensitive attention and interaction, infant brains do not develop to their optimal capacities.

The Center on the Developing Child at Harvard University describes this concept as a serve-and-return interaction in which the back-and-forth social interactions between the caregiver and infant help build the infant’s brain architecture and promote healthy development. Infant mental health counselors work with the infant and the infant’s primary caregivers to help the caregivers hear, see and understand the infant’s fundamental social and emotional needs.

To see what serve-and-return interactions look like and how a lack of these interactions can affect an infant, watch Ed Tronick’s widely viewed “still face” experiment video (youtube.com/watch?v=apzXGEbZht0). Tronick is a pioneer in the field of infant mental health and has been conducting still-face experiments for decades.

Why does this matter? As we see in the video, the infant and mother quickly reconnect and delight in each other. One two-minute experiment is not sufficient to cause long-term damage to the infant’s development. But if the mother’s interaction had been withheld for a sustained period of time, this lack of interaction might have had a negative effect on the infant and the infant’s relationship with her caregiver, such as in instances in which a caregiver has clinical depression or a substance abuse disorder.

The third core concept important in understanding infant mental health is toxic stress. The Center on the Developing Child at Harvard University describes toxic stress as long-lasting environmental stressors, such as in cases of child maltreatment, that over time cause damage to the infant’s developing brain.

All infants and young children experience stress, but when the stress is prolonged and not attenuated by nurturing caregivers, it causes reductions in neural development. In such cases, infant mental health counselors are called in to conduct social and emotional assessments to determine if any social or emotional delays are present. If delays exist, the counselor works with the infant and his or her caregivers on the maximal ways to reduce the infant’s stress and return the child to a healthy developmental path.

For example, an infant mental health counselor might be needed when an infant or young child experiences an extended separation from a primary caregiver, such as in cases of foster care placement, extended caregiver hospitalization or caregiver incarceration. These types of separations from primary caregivers can be traumatic to infants and young children and may cause heightened stress responses.

Consider an 18-month-old male child separated from his mother so she can attend a drug treatment program. During the separation, the current caregivers notice an increase in the child’s sleep disruptions, tantrums and separation anxiety. During this difficult transition, the infant mental health counselor is called in to help the child manage his stress. The counselor also helps the caregivers better understand and manage the child’s newly developed symptoms in ways that are sensitive to his trauma history. When the mother and the now 2-year-old reunite, an infant mental health counselor might be called in to help reconnect and repair the relationship between the child and his mother, help the mother understand how the child was affected by the separation and help the mother respond to her child’s attachment needs.

The research on toxic stress is robust and has applications to many dimensions of public health. The Centers for Disease Control and Prevention-Kaiser Permanente Adverse Childhood Experiences Study, conducted by Vincent Felitti, Robert Anda and colleagues and first published in 1998, asked more than 17,000 adults about their childhood experiences. The researchers found that the more adverse experiences the adult participants reported having as children, the more at risk those adults were for physical, social and economic difficulties, including heart disease, chronic obstructive pulmonary disease, depression, substance abuse, intimate partner violence and so on. Thus, intervening in an infant’s life may have profound impact not only on the infant’s current mental health but also on his or her future mental and physical health.

This finding has led to further research by economists, including Nobel Memorial Prize-winning economics professor James Heckman, who have determined that the more we invest in services for infants and young children, the bigger the return on our investment (see heckmanequation.org/content/resource/why-early-investment-matters). 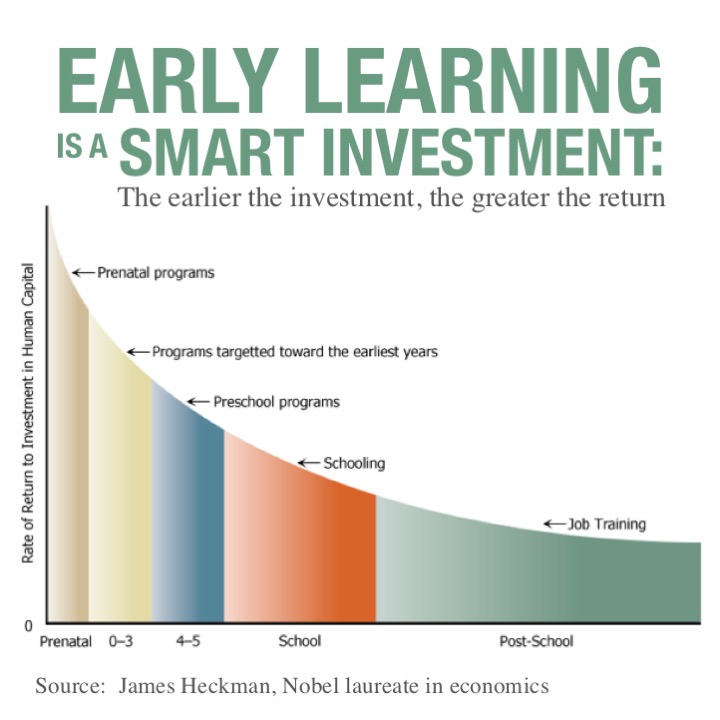 Becoming an infant mental health provider frequently requires post-degree specialty training to understand and incorporate these three core infant mental health concepts, as well as several other concepts and evidence-based practices. According to a 2009 article on competencies for infant mental health therapists written by Herbert Quay, Anne Hogan and Keith Donohue, counselors working with this age group need to have an understanding of:

Courses and workshops are available that can help interested counselors become competent in infant mental health. In these courses, counselors will learn about the variety of valid tools used to assess infants of all ages and stages and the evidence-based clinical interventions for working with this population, including Child-Parent Psychotherapy and Attachment and Biobehavioral Catch-Up. Several states offer certificates of competency in infant mental health, and international conferences and journals address research topics in this area of practice.

What all counselors need to know

By this point, readers are probably thinking, “This is interesting, but how does this relate to my work as a professional counselor?”

For example, perhaps you are a substance abuse counselor working with a client who thinks that his or her children are too young to be affected. Or perhaps you are a school counselor and notice that a family with which you work is struggling because the father has just been incarcerated and you know there is a newborn in the home. Your job may not be to work with the infant or young child directly, but you can let the family know that research speaks to how infants and young children can be affected by such events. You can also let the family know that counselors are available to work with the infant or young child and family to ensure that the child is meeting his or her social and emotional developmental milestones during this time of family stress.

Another place to look for infant mental health providers is your local pediatrician’s office. The American Academy of Pediatrics recommends that all children be screened for social and emotional developmental milestones at the ages of 9 months, 18 months, 24 months and 36 months during the child’s yearly well-child visits. Most pediatrician offices have a list of support services available to caregivers with young children. Because of the high risk of trauma in children exposed to maltreatment, your community’s child protective services office should also have a list of infant mental health providers in your area.

One of the core professional values of the counseling profession as listed in the 2014 ACA Code of Ethics is “enhancing human development throughout the life span.” One of the best things about being an infant mental health counselor is that I get to see this “enhancement” of human development. In fact, my goal is to prevent future mental and physical health issues. I have seen improvements in an infant’s social and emotional development through evidence-based infant mental health interventions in as little as six weeks.

My hope is that this brief article has highlighted some important research findings for you as a professional counselor and that you will share the information about the importance of working with infants and young children with your clients, students and colleagues whenever it is pertinent. Together, professional counselors can enhance human development from day one.

Evette Horton, a licensed professional counselor supervisor and registered play therapy supervisor, is clinical faculty in the School of Medicine at the University of North Carolina at Chapel Hill. She is a founding and current board member of the Association for Child and Adolescent Counseling (ACAC) and serves on the editorial board for ACAC’s Journal of Child & Adolescent Counseling. She is also a founding board member of the North Carolina Infant Mental Health Association. Contact her at evette_horton@med.unc.edu.