When I turned 39, I had a midlife crisis. I wasn’t home on my 39th birthday. I was on another continent, sitting in a hotel lobby at stupid early o’clock, jet-lagged and writing because I couldn’t sleep. I looked up, saw the date and realized my birthday had occurred while I had been traveling, the day lost somewhere in the time vortex that opens up when flying overseas. Technically, then, it was the day after my 39th birthday when The Voice screamed at me, “What have you been doing with your life???!”

Granted, I had earned a doctorate, had achieved tenure, had published manuscripts. I had two lovely children, and I had managed to stay married to the same person longer than any other person in his or my family history. These are not small accomplishments. But this is not what occurred to me in that panic-inducing moment. Rather, The Voice pummeled:

“Why aren’t you on The New York Times’ best-seller list yet? What happened to the blockbuster movie? Where is the Fields Medal? Why haven’t you played Carnegie Hall yet? You haven’t even 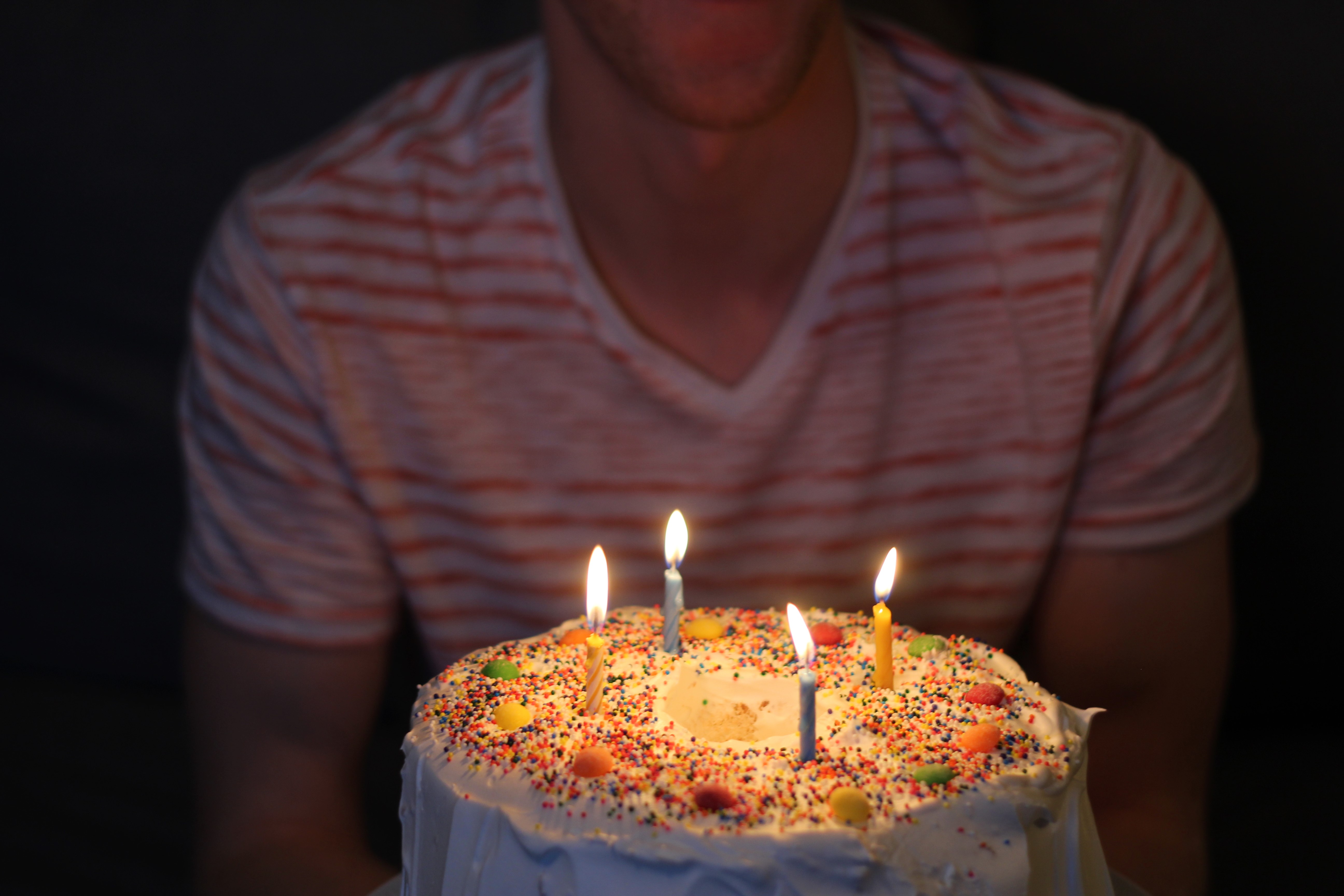 bothered to figure out the grand unification theory bringing together quantum mechanics and the theory of relativity — you’ve been sitting back letting Stephen Hawking do all the work. What the &$@# is wrong with you?”

Part of the problem for those like me is that we still cling to our childhood fantasies of success. We grew up imagining ourselves getting discovered simply because Hollywood Movie Mogul in a red convertible Mercedes screeches to a halt while we’re walking down the street and shouts, “There, there is the person I’ve been waiting for!” And the other part is because we were given some remarkably confusing aspirational advice.

In grade school, I was in the first group of identified “gifted” children. I didn’t know what it meant, and no one else understood it either. But to the dozen of us who were selected, it meant that we could leave class a few hours each week and play games. This was a good deal in our opinion, so we didn’t question anything. Yet without our knowing, we were already receiving those sneaky messages about where our lives were supposed to end up.

The social strata are well-established by high school, telling us who is and is not supposed to be a productive member of society. We instinctively knew there were no real differences between these arbitrary groups; the “achieving” group could simply get away with more because no one expected us to do anything illicit. The “remedial” group included plenty of individuals who were extremely smart and capable, but for reasons well outside themselves, no one paid attention to them anymore. This stratification persisted due to factors outside our control and taught us about the many forms of privilege and its consequences.

Many of us slowly go insane from pressure to climb to the top of the mountain, to win, to be the best at whatever is deemed successful. If we don’t accomplish it, then we have let the whole of civilized society down, our ancestors are forever shamed, and our future offspring will only hope to dream about peeking through the window of a good school. Include the discourses bombarding teenagers about being “Someone” — e.g., a doctor is better than a nurse, a scientist is better than an artist, a rich person is better than a poor person. So often our legacies make no sense to us. We are pushed by unexplained, invisible forces, but if we make a mistake, we will ultimately carry all the blame for what goes wrong. Everyone loves to claim the credit when someone succeeds, but if that person fails, it’s all on you, baby.

I never knew what I wanted to do. When I graduated high school, I had one very well-meaning teacher give me the kiss of death. I experienced heart-palpitating conflict over choosing a college major. Enter this literature teacher who took great interest in my writing. At the end of the term, I asked him to sign my yearbook. He wrote:

“Good luck to you in all you do. I know you’ll go far. Keep writing because it’s clearly what you were meant to do. Of course the last person I said that to now only writes grocery lists. Best wishes, B.”

He had a genuine interest in my future, and I suspect he thought he was being funny. But he had no idea how this gong resonated throughout my core, highlighting the double bind I lived with: You can do anything you want, but what you want might not amount to anything.

When I turned 39 in a hotel lobby, all I’d really figured out was that in one year I’d be 40. What did I have to show for myself? Had I even come close to approaching some of the lofty aspirations I held for myself, or did I too end up writing grocery lists?

Part of maturity is realizing that the frenetic pace of youth cannot be maintained. Eventually, we have to abandon the immature need for immediate gratification. Recognizing our mortality means catching on to the idea that one is not interested in dying due to blowing out your own candle; death will come in its own time, so why not learn to live? These are the chronic existential conversations that infiltrated my head as an adult who had to concern herself with things like paying bills. And the appearance of children completely redesigns the landscape — a total home renovation that leaves you forever wondering where you left your keys. So pacing becomes a necessity. Priorities must occur because we are forced to write our own instruction manuals for adulthood.

But the adult dilemma becomes, did I pace myself too much? Did I slow down to the point of stopping? Specialization is an ironic creature. It is comforting to think you actually know something. However, the danger in such comfort is that it can easily lull you into complacency. Did I avoid the new thing because I didn’t have the time, or because it would mean stepping outside of what was familiar? In the guise of developing “expertise,” did I actually limit myself from gaining knowledge?

“How have you made your mark on the world?” Regardless of how far-fetched, lofty, idealistic or fantastic my earlier aspirations were, they were there to tell me to make more of myself. Not in the sense of being the best, biggest, brightest or richest, but in the way of being more than just what was prescribed for me. Have I challenged myself? Have I at least tried to take a risk, or do I still play it safe? Did I keep listening to what everyone else demanded for my life, or did I speak up and say, “Here I am, like it or lump it.”

Disturbingly, my answer at age 39 was, “Well, sort of.” In examining how I had established myself, I found that even though I wasn’t writing grocery lists, I hadn’t exactly written sonnets either. Perhaps I felt like something was missing because something was, indeed, missing. Perhaps I was being told it was time to take the next step. I had allowed myself to live with a list of “what if” questions — What if I’d done this? What if I had gone there? What if I were like that? — and I’d fallen into the trap of constant speculation. Everyone wants to be Yoda, but I was at risk of turning into nothing more than Super Grover stuck in a tree.

I didn’t know what my mark would look like, but I decided I could live as though I had made one and see what happens. I stopped saying “no” and started saying “yes.” That’s not to say that I suddenly started agreeing indiscriminately with some “you can do anything” illusion. Instead, I decided that fear or social disapproval would no longer be enough of a reason to prevent me from trying the new thing. “It’s the way it has always been done” was no longer a good enough reason to stay the same. Not knowing became the reason for acting.

Experiments in living can have curious effects. All kinds of wild ideas entered my mind. Not all were viable, but the energy that comes from rediscovering one’s creative power is intoxicating. It flows into every part of work and life.

If this were a fairy tale, I would stop at this “happy ending.” But I’m not trying to wrap my experience up in a neat bow, nor am I trying to say that this is just my story. I’m not 39 anymore. I’ve had a few years to live with my experiment, and I prefer living this way. But it has not made life easier. In fact, living as though the “what if” has already been answered makes life more challenging. But it’s a challenge I put to others — and especially to a counseling profession that also seem to have gotten stalled in its own internal-gazing.

Twenty years ago during my master’s program, my professors said that counseling was in its adolescence. Today, we are still struggling with questions of identity. Who are we? What are we about? What do we believe in and stand for?

We have gone through several fast-paced movements, some which have enhanced us and some of which have diminished us. Like so many tumultuous progressions, we regularly take three steps forward and two steps back. Yet we also seem to have lulled ourselves into a strange quietude, the kind where we exude certainty until we are asked to define what it means to carry this mantle. In our quest for legitimacy, we could very well have sold ourselves out, making us into a caricature of the professions we seem to think we should be. Are there lessons we can borrow from fields such as psychology, social work or psychiatry? Certainly. But at what point do we stop saying, “This is who we are not” and instead assert, “This is who we are?”

The “what ifs” have caught us for far too long. How many debates, circular arguments really, do we get into about which theory is the “best,” which specialty is the most important, who is the most moral or just? At what point will we admit to ourselves and the rest of the public how many of our choices have been profit driven — claims staked to promote our own brand of job security? What do our politics really say about us — not an individual’s personal views, but the fact that we as a profession still argue amongst ourselves about who is granted personhood.

What if instead of fighting over limited crumbs, we acted like a profession with a unified vision, not of what each counselor should do but of who our profession is meant to serve? What if we stopped proving our legitimacy through purely Cartesian lenses and instead recognized that the totality of our work cannot be reduced to widgets and Facebook memes but must also encompass a marvelous, mysterious human interaction? What if instead of resting on our certainties, we asked ourselves in what ways our insecurities have seduced us into believing that the illusions we cling to are the realities that everyone must follow? What if instead of being afraid of our differences, we took a chance to allow ourselves to be influenced by each other in the ways in which we arrogantly expect our clients to be influenced by us?

Prepare to grow up, Counseling. What have you been doing with your life?

Shawn Patrick is an associate professor in the counseling and guidance program at California State University, San Bernardino. Contact her at shawn.patrick@csusb.edu.