During the time that Kerin Groves spent by her dying client’s hospital bed, she could tell that he felt conflicted. “I sensed he kept hanging on because his adult children were unable to cope with him dying,” she recalls. “The son kept urging him to fight and get better, even though the patient was in his 90s and ready to go.”

When the man’s children left his room for the day, he visibly relaxed. Groves, a licensed professional counselor (LPC), gently pointed out the difference in his tension level.

“[I] let him know it was OK to go whenever he was ready, and I assured him that I would be there to help his son get through it,” Groves says. “He looked right at me, held my gaze for a time and then closed his eyes for the last time. Given permission and support, he was able to go in peace.”

Groves, an American Counseling Association member who has worked with older adults in retirement communities, assisted living, nursing homes and home care settings, is among a select number of counselors who routinely help individuals and their families cope with the process of dying.

Receiving a terminal diagnosis, or having a loved one receive it, is almost too much to comprehend initially, says Mary Jones, an LPC who spent 20 years counseling patients and their families in an oncology center. “People go into shock, and there is an inability to wrap their minds around what they are hearing,” she says.

Loved ones who are in the room when the terminal diagnosis is given often go through a secondary trauma — shock at what they are hearing and concern for their loved one’s feelings, Jones says. In fact, she adds, these loved ones may initially experience more anxiety than the person receiving the diagnosis. 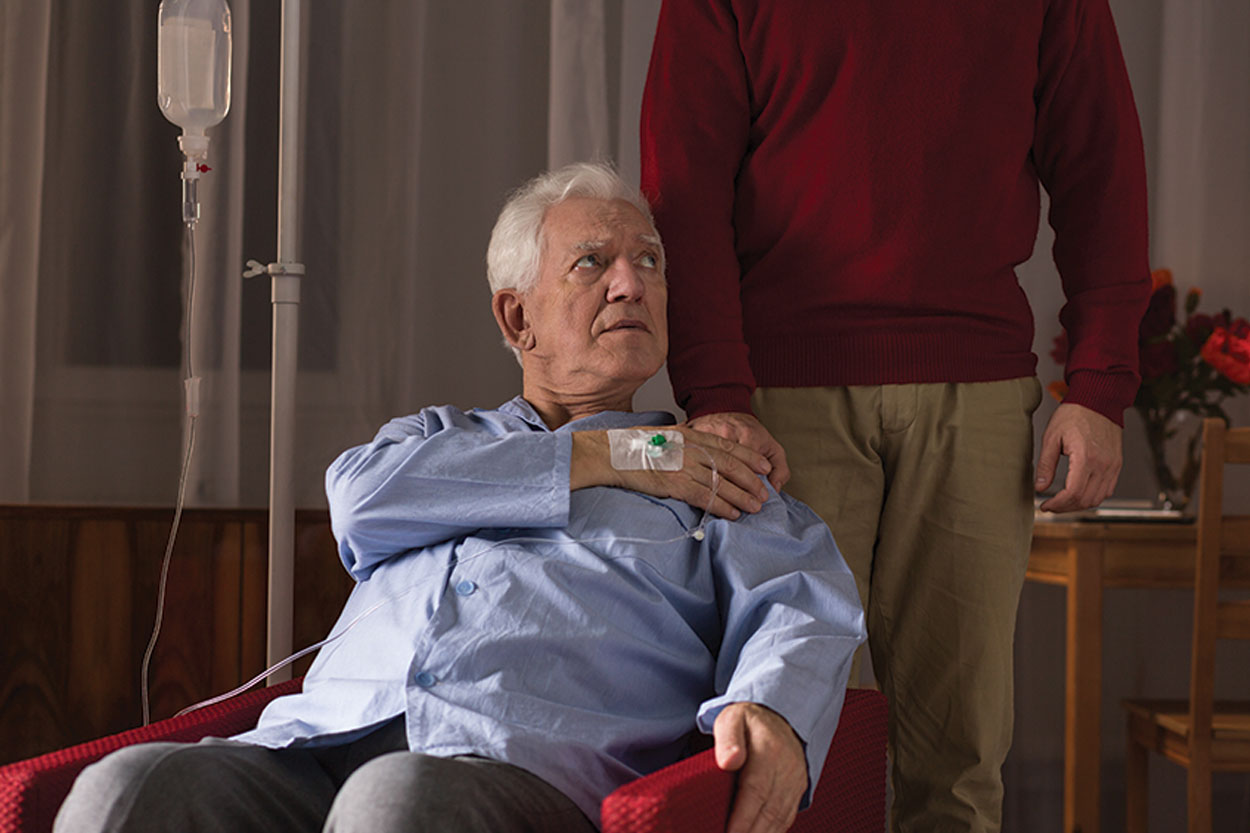 Jones counseled patients with varying prognoses, including those who would go on to live long lives after treatment, but in her role, she often saw people at the very end, when they had been told they had only months or weeks to live. “Once they know that treatment isn’t working and there are no more options, it seems like people hit a fork in the road emotionally,” she says.

One path certain patients chose was accepting their impending deaths but also determining to answer a weighty question: What do I do next? In her role as a counselor, Jones would talk to these clients about their legacies — what they wanted to say to or leave behind for their loved ones.

One of her clients was a father with a young son. He made a video that talked about the things he wanted his son to know but wouldn’t be there in person to tell him. The video included subjects such as what the son should know about middle school, about girls and about sex.

The other fork in the path that Jones commonly witnessed was complete denial of the terminal diagnosis. She heard patients make statements such as “This isn’t happening” or “I’m not going to die.”

As a counselor, her role was to try to guide these patients toward acceptance. She acknowledges that the task was difficult. “It so goes against our belief and training and experience [as counselors] to have to say to someone, ‘But your end is near,’” she says.

Jones would sit with these patients and encourage them to talk about their feelings regardless of what they were: fear, anger, sadness, disbelief, etc. After validating what they were feeling, she would circle back around to acceptance and the importance of deciding what they wanted to do or say before they died.

Groves, currently a private practitioner in Denton, Texas, often used existential and person-centered therapy when working with individuals in denial about their impending death. “Person-centered therapy gives the patient the lead in directing the conversation in the way they feel it needs to go, at their own pace,” she says. “We talk about denial openly and how it helps or serves a purpose, as well as how it might work against them. Helping a client make a cost-benefit analysis regarding denial is empowering and respectful of [his or her] needs.”

Of course, it isn’t uncommon for family members to be dealing with denial too. Jones, who would also provide family therapy in her role, says this can create tension between family members and the person who is dying, just when that person needs more support than ever.

Emotional support from family members is important, but the principal source of support for many clients is their husband, wife or partner. If discord is already present in the couple’s relationship, these problems will only be exacerbated by the stress of serious or terminal illness, says ACA member Nicole Stargell, who has used emotionally focused therapy (EFT) with couples facing breast cancer diagnoses. EFT operates on the premise that to feel “attached” (safe and secure) in a relationship, couples must be able to manage and share their emotions, she explains.

When certain people experience conflict or distress, they withdraw — sometimes physically — and don’t want to talk about the problem or issue, Stargell says. Other people are “pursuers,” she continues, and their desire is to talk about what is wrong. Pursuers will actively seek responses from their partners.

Anytime that either partner displays withdrawing or pursuing behaviors, implicit assumptions are being made, says Stargell, an assistant professor of counseling and the field placement and testing coordinator at the University of North Carolina at Pembroke. For instance, partners who withdraw often do so because they perceive themselves not to be strong enough to cope or view themselves as being deficient in some other way. When pursuers try to talk to withdrawers about what is wrong, this just reinforces the withdrawers’ feelings of deficiency, Stargell explains. Meanwhile, pursuers are thinking that withdrawers don’t regard them as being important enough to try to talk things through with them. As a result, both partners end up feeling alone and unsupported, which isn’t good for either individual’s mental or physical health, she says.

Using EFT, Stargell would identify the cycle of misunderstanding that plays out repeatedly between the couple but make it clear that neither partner is to blame. Next she would help the couple start to reframe their interactions by asking them to talk about a conflict and actually say out loud what they were thinking in response to their partner’s behavior.

Stargell would then help the couple see that their reactions had more to do with self-blame than with the other person’s actions. In other words, there was no implicit message attached. She would also have the couple role-play, taking turns presenting a problem and practicing reacting differently to what the other person said or did.

Stargell also works with couples to identify triggers or recurring situations that tend to set off the negative cycles. For instance, in the week following chemotherapy, the partner who is a withdrawer and is undergoing treatment might retreat emotionally, in part because he or she is sick and feels like a failure for not being able to perform his or her normal role, such as being the one who washes the dishes. Because the withdrawing partner is sick, the pursuer doesn’t want to push for interaction. However, Stargell says, it’s not uncommon for the pursuer to feel some anger or resentment about the things the partner with cancer — or the couple together — can no longer do. The withdrawer can typically sense the underlying tension, which makes him or her withdraw even more. Together, Stargell and the couple would talk about what the couple could do differently the next time the withdrawing partner has chemotherapy.

There are many ways that counselors can support and assist clients who know that they are dying. “I have helped clients find meaning in their personal [histories] and accept suffering during the dying process by engaging in life review and reminiscence, with both laughter and tears, allowing them to say what they haven’t been allowed to, reconciling unfinished business from the past [and] helping them connect with and share their true feelings with their loved ones,” Groves says. But sometimes, the most significant role is “just sitting with them in silence as a companion,” she adds.

Groves has also helped clients facing death to work through their fears and concerns. These have included issues such as feeling guilt about being ready to die when family members beg them to keep fighting; fear of more pain or agony; weariness from long medical treatments; spiritual doubts or fears; and anger over family conflicts erupting or being exacerbated during the medical crisis.

Jones would sometimes take on a sort of facilitator role with these patients, making sure they received what they wanted or needed in their final weeks or days of life. But counselors can also advocate for patients in other ways, Jones says. Especially toward the end, patients with terminal illnesses can experience a significant amount of pain but may not want to take yet another medication. She recommends that counselors working with this population educate themselves about alternative methods of pain relief and relaxation techniques.

As the end approaches, some individuals find it easier to accept that they are going to die, whereas loved ones often have the opposite reaction, Groves notes. “Curiously, people who are near death may be more calm … because they have accepted their prognosis, while their loved ones struggle with denial and avoidance because they are not ready to let them go,” she says. “When a person dies, the opportunity to make peace with them is over, so at least when the person is still hanging on, the belief or hope that it can be reconciled is still there. They may fear letting that person die with unfinished business still between them but struggle to vocalize those unsaid things because they don’t feel it’s appropriate or acceptable.”

Groves says counselors can also play an important role in preparing family members for what to expect in the dying process. “If hospice is involved, their nursing staff may make an extra effort to help counselors explain to the family what is happening biologically, the signs of impending death and other medical information,” she says. “A counselor can also be of help with active listening, reflecting feelings, normalizing emotional responses, addressing spiritual and existential concerns, and [exuding] warmth. Many people do not know what to do or say, so they do or say nothing at all, leaving the family members stranded in their grief. Counselors are equipped to sit with people in pain and be present with them.”

Groves also believes that being present when a loved one dies can be very healing for family members. “It’s very hard to witness a death and, frankly, most people fear and avoid that experience,” she says. “They are typically afraid they will be overwhelmed with their feelings and be unable to cope. But if one is willing and able to tolerate the discomfort, with the support of the counselor, being with a dying person in their final moments allows one to genuinely embrace the natural process of death and confront its reality, which is important for healthy grieving.”