Comic books such as Batman, Superman and The Avengers have become a common language in our culture. People have been drawn to superheroes since Jerry Siegel and Joe Shuster introduced the world to Superman — the first hero to go beyond normal human abilities — in Action Comics #1 in 1938. In 1939 in Detective Comics #27, we were introduced to Batman, a man shrouded in shadow and tragedy.

Characters such as Batman, Superman, Captain America, the Flash and many others were created when the world was enveloped in war. Japan had invaded China and, not long 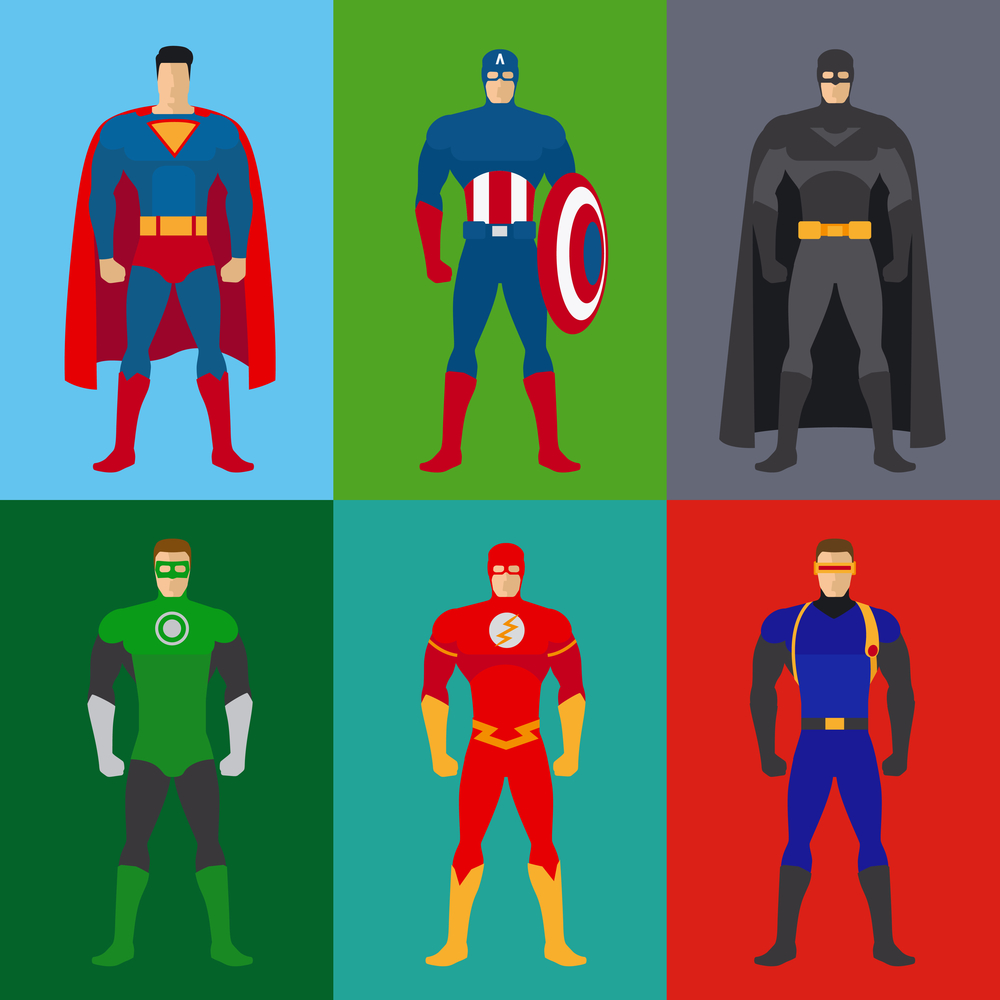 thereafter, Germany invaded Poland. These characters stood as symbols of hope and freedom during this time.

Today their names are known to almost everyone. With both DC (Detective Comics) Entertainment and Marvel Cinematic Universe releasing more and more movies every year, superheroes and the villains they battle have become an integral part of our culture. As reported by Comichron, comic book sales have grown consistently over the past four years, with 2015 seeing almost $2 billion in sales.

At one time, comic book stores were associated with children and stereotypical “nerds/geeks,” but that is no longer the case. Today if you visit a comic book store, you will see people of all ages, genders and backgrounds. Comic books have become more diverse and applicable to a wider range of individuals, meaning almost anyone can find a character or story that they relate to, as well as meaning attached to that character or story.

Comic books can also help communities to heal. For example, the comic book Love is Love, a joint venture between DC Comics and IDW Publishing, benefits the victims of the mass shooting at the gay nightclub Pulse in Orlando, Florida. Marc Andreyko, a comic book writer, organized the project, with all proceeds going to survivors and the victims’ families.

The impact of stories

Comic books can have a profound impact on those who read them, offering more than just an escape from our lives. Jonathan Gottschall, author of the book The Storytelling Animal: How Stories Make Us Human, states that stories change us at the emotional, behavioral and psychological level.

The superheroes found in comic books are our personification; they are who we strive to be. Like us, superheroes are complex and have a broad range of emotions. They go through challenges and obstacles, just like we do.

Comic books also tackle difficult issues such as racism and bigotry, war, envy, friendship and the individual’s sense of responsibility. Characters such as the X-Men are feared and hated for being born “different.” They are forced to register and are even hunted. Such issues can be applied to many minority members of our society, especially in today’s political climate.

Comic books have become more diverse, with African American male superheroes such as Sam Wilson (Falcon), Luke Cage and T’Challa (the Black Panther), as well as Miles Morales (Spider-Man), a male of black and Latino descent. Comics are also becoming more female driven. The new “Iron Man” is actually a 15-year-old African American female, Riri Williams, who is a genius. The new Thor, wielding the hammer Mjölnir, is also a woman, Jane Foster. This comic book was controversial because Foster is not called “Lady Thor” or some other female version of the name. Instead, she is Thor, and she is worthy of the mantle.

Marvel Now: Ms. Marvel introduces a new Ms. Marvel — Kamala Khan, a Pakistani American teenager girl from Jersey City. It is a typical origin story but also deals with the challenges of a Muslim girl who is struggling with acculturation, wanting to be a “typical” Western girl and being in a traditional home. Kamala’s story applies to those who may feel different, not belonging to either culture, and may help those going through the process of acculturation.

Comic books have also become more inclusive in the portrayal of LGBTQ characters: Batwoman, Green Lantern (Alan Scott) and Iceman identify as gay; Catwoman, Harley Quinn and John Constantine identify as bisexual; Lord Fanny identifies as transgender; and Mystique from X-Men identifies as sexually fluid and gender-fluid. With so many diverse characters available in comic books, counselors can find meaningful characters for their clients.

Characters such as Batman and Superman serve as our modern-day folktales and myths. Batman is a human being just like us. He goes through adversity and challenges, he bleeds and can be broken, but he chooses to rise above those challenges to fight the darkness and the villains. He inspires by declaring that we have a choice in how we respond to tragedy. Batman (Bruce Wayne) lost his parents at a young age when they were murdered in front of him. Instead of letting that event destroy him, or simply wasting his inheritance, he makes a choice to overcome and vows to stop the monsters.

Like Batman, Batgirl possesses no superhuman powers. Unlike Batman, she is from a modest home. In New 52 Batgirl by Gail Simone, Batgirl has posttraumatic stress disorder (PTSD). She was shot in the spine by the Joker and was paralyzed, but she overcame this trauma and continued to help people even when she was hurt. She continues to fight her PTSD and fight for good.

As Gotham Chopra, co-author of The Seven Spiritual Laws of Superheroes, states in the documentary Legends of the Knight, characters such as Batman are archetypal aspirations that we have pursued throughout time. Comic books are stories that can help our clients reach new insights about themselves and their challenges. Although we may not wear capes, we all have the capacity to choose, to overcome and to help our communities. Superheroes provide us with the ability to see that we can make a positive impact and strive toward being better versions of ourselves.

The use of comics in counseling does not need to be limited to working with children. With the help of Comicspedia, created by psychology professor Patrick O’Connor, those new to the comic book world can find comic books that deal with specific issues from grief and loss to LGBTQ issues. Certain clients may already have an interest in a particular character; the Comicspedia website can aid counselors in finding books to apply.

Bibliotherapy can be applied by assigning specific issues for the client to read and reflect on. The stories can be then processed in the counseling session. Comics can give clients the ability to read about themes that they connect to and can help them open up in ways that they didn’t think possible. The stories in comic books can also demonstrate the application of moral courage and resiliency and choosing to make a positive change. When connected to our clients’ stories, this can help them feel that they also possess the ability to make positive changes.

Comics can also be used as a form of narrative therapy by having clients create their own comic or even adding panels to existing books.

Comics can be used in individual and group counseling. I created a group titled (for billing purposes) “self-exploration of values and beliefs through narrative therapy.” In this group, we explored not only personal values and beliefs but also issues that clients were having with their diagnoses, problems with grief and loss, and issues of feeling different. Group members explored their stories in the creation of their comic books.

The group was made up of adults ages 18 years and older in a mental health community setting. The clients had been diagnosed with long-term mental disorders ranging from major depressive disorder and borderline personality disorder to schizophrenia.

In the group, I utilized comic books such as Batman and Robin: Requiem for Damian by Peter Tomasi, Patrick Gleason, Mick Gray and John Kalisz. This remarkable book depicts the journey of grief and loss. With the death of his son Damian, Bruce Wayne/Batman grieves. This book features no dialogue — only illustrations — and is incredibly impactful. 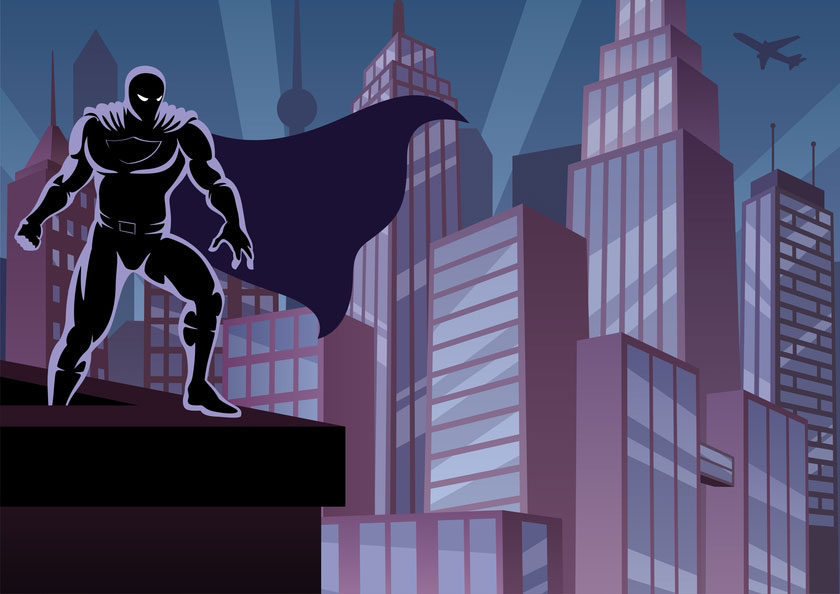 In a counseling setting, clients used this comic book to identify the different “stages” of grief and loss and process when they had experienced something similar. In conjunction with narrative therapy, clients then added a page in which they talked to Bruce Wayne or Batman about the loss. This activity allowed the clients to step outside of themselves. Many shared “advice” with Bruce/Batman; they were truly giving advice to themselves.

Near the end of the group sessions, the participants created their own comic books. They were free to choose any issue or problem they were facing and create a narrative around it. One client turned her mental illness into an actual being — a villain — that she was battling and highlighted the messages she hears about her disorder. This client found the activity empowering, allowing her to turn something that she struggled with internally into something external that she could then “fight.”

Another client dealt with his grief and loss of loved ones in his comic. A third client used her comic to address past trauma by confronting her abusers. The comic book format allowed her to do this in a safe way that provided meaning for her.

There is little research on comic books and even less on their application in a counseling setting. However, I believe them to be a potentially rich resource that counselors should consider.

Lauren Calhoun is a doctoral student in counselor education and supervision at the Chicago School of Professional Psychology, Chicago Campus. She has a master’s in counseling psychology and currently works as a crisis counselor at Lutheran Social Services of Illinois’ Project Impact and Welcoming Center. Contact her at Lec6725@ego.thechicagoschool.edu

Related reading from the Counseling Today archives: “Geek therapy: Connecting with clients through comics, video games and other ‘geeky’ pursuits”