Hooah: Military slang referring to or meaning “anything and everything except ‘no.’” Used predominantly by soldiers in the U.S. Army.

My father was in the U.S. Army for more than 30 years. I grew up as a military dependent, relocating every few years (and attending more than 20 schools) until I graduated high school. I joined the Army Reserve, later married my husband, a U.S. Navy submariner, and he eventually ended up retiring from the Army after 20 years. My eldest son joined the Army out of college and is currently on active duty.

I have been a licensed professional counselor in Augusta, Georgia; Bamberg, Germany; Lakewood, Washington; Fort Knox, Kentucky; Columbus, Georgia; and most recently, Somerset, Kentucky. As a member of the American Counseling Association and the Military and Government Counseling Association (a division of ACA), I am concerned about the rising number of suicides among our military veterans. On a related note, I am also concerned by the limited number of education and training opportunities available to counselors who are dedicated to the specific needs of military clients.

This past year, the Kentucky Counseling Association (KCA), a state branch of ACA, advertised a training program for counselors called Kentucky Operation Immersion. The program offered an immersion experience into military culture that aimed to help counselors become aware of the unique culture and specific needs of military clients. The training educated counselors on how better to help soldiers as they transition back from wartime environments overseas and reintegrate into a civilian society.

Only about 1 percent of the U.S. population actually serves in the military. Many people do not understand the difference between the military mindset and the civilian frame of mind. For that reason, I was impressed and excited to see that KCA was addressing a very important topic that can make a difference to our military members.

As a counseling professional and former soldier, I jumped at the opportunity to train with the Army National Guard at the Wendell H. Ford Regional Training Center. The Kentucky Department for Behavioral Health, Developmental and Intellectual Disabilities (DBHDID) and the Kentucky Army National Guard presented and sponsored the training, and many of their respective department members joined in the training. I had no idea what I had signed up for, but sometimes ignorance is bliss.

I arrived to join approximately 30 other participants from a variety of specialties, including drug and alcohol counselors, psychologists, school counselors and Kentucky Department of Veterans Affairs employees. The participants ranged in age from their 20s to their 70s.

On the first day — basic training — we were introduced to the training leaders, department heads and Army National Guard soldiers who would mentor us throughout the training. We were issued our field equipment, including Kevlar helmets and flak jackets, which we would wear during our training for the next three days. Removing the metal plates that are normally part of the bulletproof garment decreased the flak jacket’s weight. Even so, the jacket was still heavy and served as a constant reminder of what soldiers wear to protect themselves during deployment.

Our first training exercise was an introduction to platoon formation and marching, but this version was much kinder than what I had experienced in my Army basic training days. Regardless, I found myself unable to maintain the pace of the platoon. This bruised my ego and provided a gentle indicator of the physical limitations I might encounter in the training exercises to come. And come they did … 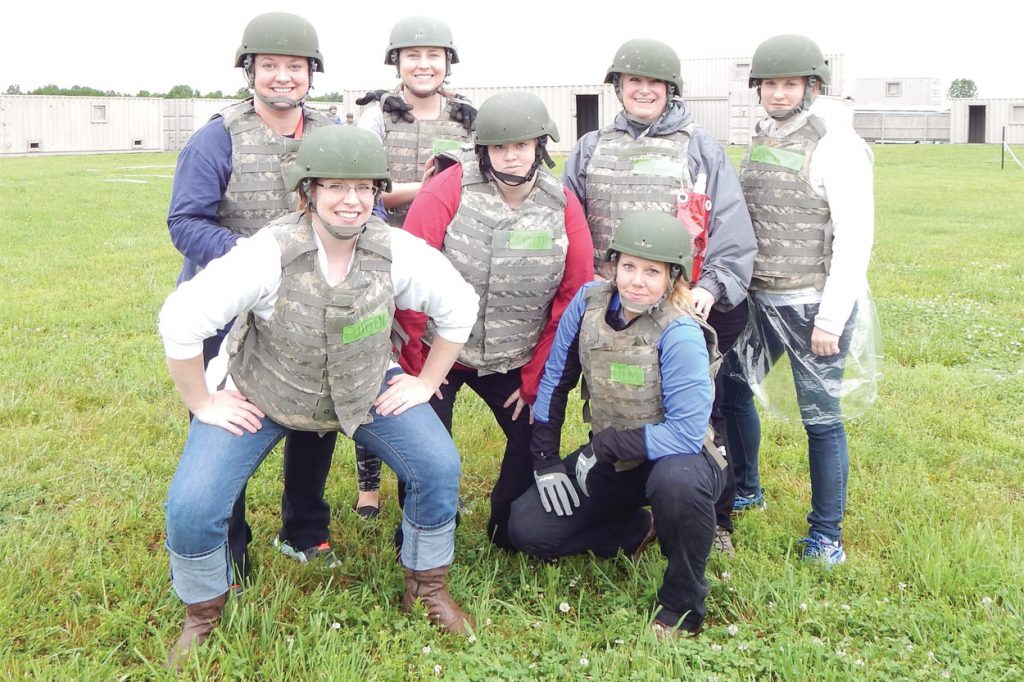 The author, second from right in the back row, with fellow members of her Operation Immersion training squad.

The Field Leadership Reaction Course was a team-building exercise (obstacle course) that further introduced me to my counselor peers. We had fun coordinating our navigation of the ropes, walls and boards to achieve successful outcomes. Then Kentucky weather intervened, and we headed for shelter from tornadoes, storms and heavy rains. Chow took place in the mess hall with service members who invited us to ask them questions about the military and their military experience.

That evening we met Bobby Henline, an American hero, comedian and motivational speaker who served four tours of duty in Iraq. During his fourth tour, he was the sole survivor of a roadside bombing that left a third of his body burned. He shared his survival story and his outsize sense of humor with us. Bobby participated with us throughout the training and was an inspiration to us all. His humor helped lighten the serious moments, and his encouragement was invaluable. It was a true honor to meet him and a blessing to spend time with him.

Sleep was sweet after such a full first day.

Day One counseling takeaway: Military training is demanding physically and challenging mentally. Build relationships with military clients by asking about their training and work environments. Ask questions about any military-specific acronyms that they use. Many people know what an MRE (meal ready to eat) is, but fewer are familiar with what FOB (forward operations base) or TOC (tactical operations center) represent. Get to know these clients’ personal stories. This can shed light on what might be troubling them and why they are seeking counseling.

Day Two arrived early — at 5 a.m. — and there we were, in formation, doing PT (physical training). Mobilization day started with breakfast in the chow hall, and then we had a class on sexual assault prevention. That morning we also heard personal stories of deployment from individual soldiers. Their stories spoke of bravery, tragedy, courage and, sometimes, boredom. All the stories touched our souls. In fact, when the program participants looked back over those days of classes, physical challenges and training, we decided the deployment stories were what we would remember most.

After a class on combat-related trauma, we headed to the SIM (Simulation) Center, where we ate MREs and enjoyed the virtual combat simulators in the forms of EST (Engagement Skills Training with Night Vision), IED (Improvised Explosive Device training instruction), HEAT (Humvee Egress Awareness Training Simulator) and CSF2 (Comprehensive Soldier and Family Fitness).

That evening, we were briefed by the commander, Capt. Michael Moynahan, and heard another personal deployment story from Maj. Amy Sutter, a licensed clinical social worker. Her mental health perspective on deployment was invaluable, and we also gained insight on deployment from a female viewpoint.

Day Two counseling takeaway: Deployment is rough, both mentally and physically. The living arrangements are complex, and soldiers have many challenges related to isolation and loneliness. At the same time, privacy is often limited. Build the therapeutic relationship by asking your military clients about any and all deployments. Each deployment offers military members challenges and unique perspectives. These could be explored through open-ended questions about their personal experiences. Be aware that some of these clients have seen or done things that they do not want to disclose or remember.

Deployment day again came early, with PT that included a warmup and running track. Classwork began with a briefing on substance abuse, posttraumatic stress disorder and traumatic brain injury. After listening to a suicide prevention panel, we headed out on a bus to the Gwynn City MOUT (Military Operations on Urban Terrain) site for our deployment training.

The Army National Guard launched a few simulated IED attacks in the direction of our bus and also created a machine gun simulation to get us “in the mood” for our urban warfare exercises. Command Sgt. Maj. Matthew Roberge led the military demonstrations and the exercises to prepare us for clearing a building of enemy personnel. The smooth, precise and sharp Army National Guard soldiers modeled the intricate procedure for us, and in teams of four, we attempted to reproduce the action with our military-style paintball weapons.

Our attempt was a less than perfect assault, with paintballs flying everywhere and Kentucky counselors doing their best to come out of the training exercise unscathed. That said, there was much laughter and excitement throughout, and everyone emerged feeling abundant respect for our U.S. military, and especially the group of professionals who worked with us during our training experience.

Dinner that evening was a relaxing outdoor cookout, during which we said goodbye to many of the soldiers who were leaving for their drill weekend. Awards were given, speeches were made and the treasured “challenge coins” — engraved with a unit’s or organization’s insignia or motto and given as a sign of respect — were secretly passed from palm to palm.

Day Three counseling takeaway: Military members face death often and rely on their training and peers to stay safe. Their training is precise and has to be executed perfectly every time, or the soldiers and their companions run the risk of becoming casualties. A high level of stress accompanies each operation, and sometimes that stress may last for days, weeks or even months, with little or no downtime for the soldier. The residual effects from this intense training and the soldier’s subsequent experiences can last a lifetime. Counselors should understand the deleterious effects of combat. Even if operations are carried out perfectly, casualties can occur, accidents can happen and the effects can be devastating.

Demobilization day was early to rise — 4:50 a.m. — so we could clean the barracks, pack our bags and return the gear. Breakfast was quick, but then our first speaker arrived to awaken our senses. Capt. Phil Majcher spoke about his role as battalion chaplain and the duties that were part of the military chaplaincy. He didn’t sugarcoat anything, giving many of us moral points to ponder.

Sgt. Brooks, a female soldier, offered to speak with the female trainees about her experiences as a woman in the military with two deployments under her belt. Gathering together as women, we heard her personal story of courage, determination, struggling as a single mom and the challenges of being female in the Army. Her story was incredible and touched each of us. I must also mention that watching Sgt. Brooks throughout the entire training was like witnessing a master of all trades. She did everything that her male counterparts did, and with effortless perfection.

As we wrapped up the training, pictures were taken and awards were announced. Heath Dolen, DBHDID program administrator, presented each of us with a certificate, and a coveted challenge coin was passed secretly in a handshake.

As I drove home, I reflected on the immense amount of information and knowledge we had all gained as mental health professionals. This training was invaluable in providing us with skills to help soldiers as they return from difficult and sometimes horrific experiences. Many of these potential clients need to know that the counselors assisting them do actually understand some of the hardships they have endured. Counselors must gain the trust of hurting service members before many of them will disclose the horrors that they witnessed or even participated in during a deployment to a war zone.

The rules that we typically live by in our society do not always correspond to the experiences that soldiers see and live through. The camaraderie of this very tightknit community is exceptional, and counselors must understand the underlying military culture and gain the trust of these soldiers to be as effective as possible. Of that, I am certain.

I highly recommend that all mental health care professionals who take care of our soldiers undergo the type of training offered in Operation Immersion. Our heroes deserve the best that mental health professionals can give them, and this training definitely moved us in that direction.

Janet Fain Morgan is a military family life counselor licensed in Kentucky and Georgia. She is a faculty member of William Glasser International and a member of the Military and Government Counseling Association, a division of ACA. She is also a former soldier. Contact her at JMFainMorgan@gmail.com.