This past year, the American Counseling Association Governing Council endorsed formal competencies for the practice of animal-assisted therapy in counseling. The authors of the standards, and the coordinators of ACA’s Animal-Assisted Therapy in Mental Health Interest Network, contend that the competencies (available at counseling.org/knowledge-center/competencies) represent a key step forward in both the protection of clients and the promotion of therapy animals’ well-being. My own contention is that the adoption of these competencies additionally points to a need for ACA to endorse a “duty to protect” that applies to animals.

As a doctoral student in counselor education and supervision at University of the Cumberlands in Williamsburg, Kentucky, one of my areas of interest is animal-related counseling issues. I have become increasingly convinced that the human-animal bond is for many people an integral aspect of wellness, recovery, purpose and hope. Furthermore, I contend that it is misguided for the counseling profession to advocate for the protection of animals that we happen to use in 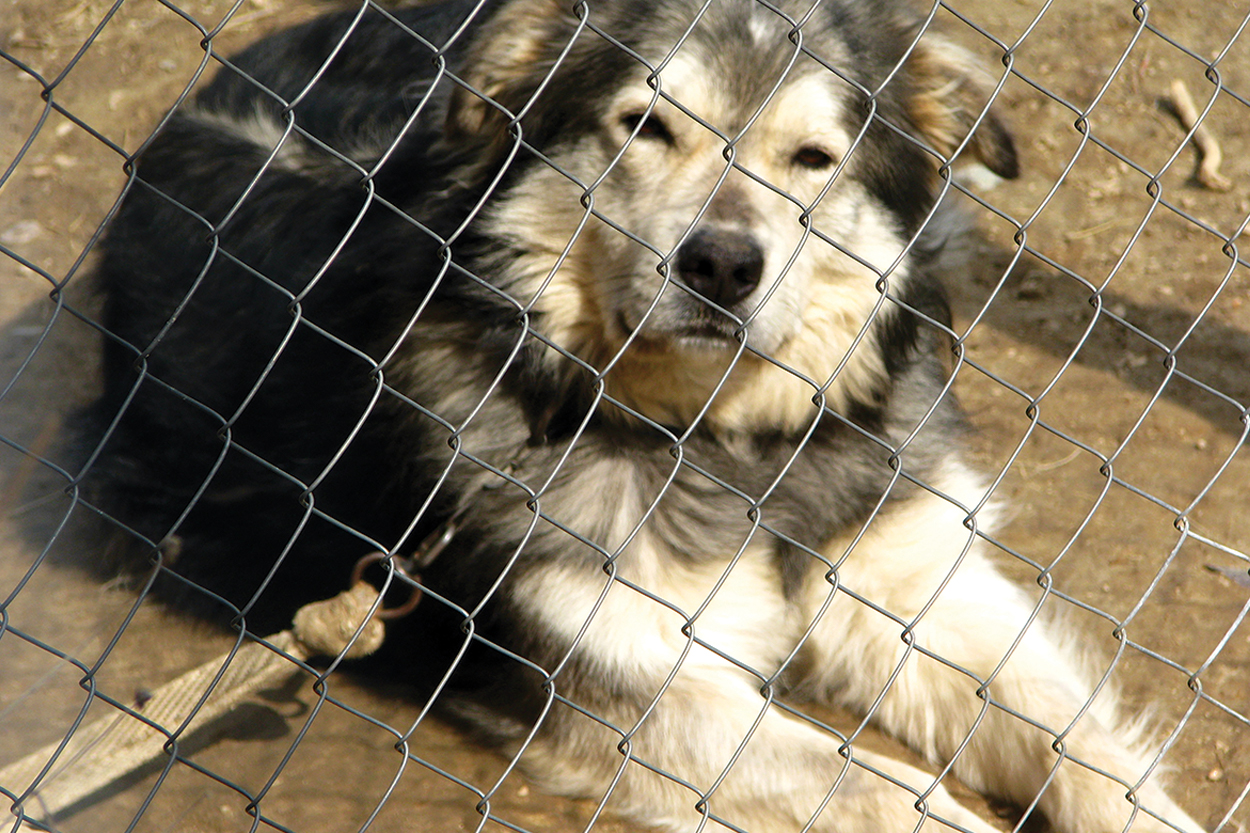 our interventions but to take no stance in the protection of other animals whose lives are intertwined with the people we serve. Anecdotally, I have encountered significant support for this sentiment, both within and outside of the counseling profession. I offer a rationale for it here, not merely as a philosophical concept to be considered hypothetically, but as an invitation and a call to action for ACA decision-makers.

Tracing back to the Hippocratic oath, doctors and mental health counselors are required to maintain the confidentiality of information disclosed to them in the context of the therapeutic relationship. An exception for counselors is their “duty to protect” potential victims from the anticipated violent behavior of a client. I’d like to make the case that a client’s anticipated violence toward animals ought to be included on the counseling profession’s list of actions that require mandatory reporting.

Animals are already protected by existing state, national and international laws, and I think that adapting the ACA Code of Ethics to reflect adherence to those laws is both a logical extension of our ethical framework and in keeping with the spirit of our duty to report.

The intention of mandated reporting, dating back to the California Supreme Court’s landmark 1974 Tarasoff ruling (amended in 1976 to replace “duty to warn” with “duty to protect”), was to impose a legal obligation on psychotherapists to notify individuals who might potentially become victims of violence perpetrated by a counselor’s client.

The ACA Code of Ethics names “serious and foreseeable harm” (Standard B.2.a.) as an exception to maintaining confidentiality. In full, the standard reads: “The general requirement that counselors keep information confidential does not apply when disclosure is required to protect clients or identified others from serious and foreseeable harm or when legal requirements demand that confidential information must be revealed. Counselors consult with other professionals when in doubt as to the validity of an exception. Additional considerations apply when addressing end-of-life issues.”

To elevate that standard to afford protection to nonhuman victims, it could be amended to read, “… clients or identified others, including animals protected from cruelty by applicable state laws …” Imagine the profound impact our profession could have on alleviating undue suffering with the addition of those nine words. Our responsibilities as counselors would remain essentially just as they are, but without a pass for ignoring instances of “serious and foreseeable harm” to animals protected by law. The ACA Governing Council’s endorsement of competencies that, in part, safeguard the comfort and well-being of animals used in therapeutic interventions is laudable; extending those concerns to protect the most defenseless victims from the most egregious acts of cruelty seems to me to be a reasonable and much-needed next step.

It is worth noting that animal protection laws vary considerably from state to state. For instance, according to the Animal Legal Defense Fund, all but two U.S. states impose felony-level penalties for severe forms of animal abuse, and some states allow for the inclusion of animals in domestic violence protection orders. Additionally, some states require mental health evaluations or counseling for animal-abuse offenders. My proposed amendment to our ethics code is intended to be both comprehensive and flexible enough to accommodate the multitude of variations in state laws.

A likely objection to this suggested modification to our code of ethics might involve concerns about damaging client-counselor rapport. However, the same philosophical justification that applies to our current “duty to protect” mandate applies here too. The amended code would simply reflect the standard established by existing law by identifying and protecting those against whom acts of violence constitute legal violations. As it stands now, the ACA Code of Ethics does just that by protecting humans from illegal acts of violence, but it in effect flouts the law when it comes to protecting animals.

In addition to reconciling this disparity in our duty to report, this amendment would be congruent with our duty to take seriously behaviors that are likely to place both the client and the victim in harm’s way. After all, as counselors, we would be hard-pressed to conceive of the therapeutic value of not intervening in the commission of a violent crime. In the case of child abuse, for instance, it would neither contribute to the protection of the victim nor to the progress of the perpetrator to not treat the crime as being of paramount and urgent importance. The same can be said for the significance and immediacy of animal cruelty.

Extending our duty to report to include acts of animal cruelty is a logical and consistent next step because, unlike with other criminal acts (knowledge of which does not warrant breaching confidentiality), animal cruelty is a crime that involves intentional bodily harm. From that perspective, our failure to include it in our duty to report would seem an ethically arbitrary exclusion.

Entities such as the U.S. Department of Education, the National Crime Prevention Council and the American Psychological Association agree that cruelty against animals is a warning sign for at-risk youth. Since 1987, the American Psychiatric Association has included animal cruelty as a symptom of childhood conduct disorder in its Diagnostic and Statistical Manual of Mental Disorders. It defines the disorder as a “repetitive and persistent pattern of behavior in which the basic rights of others or major age-appropriate societal norms or rules are violated.” According to the American Psychiatric Association, additional implications of such tendencies include an increased likelihood for exhibiting similar symptoms in adulthood, sometimes resulting in meeting the criteria for antisocial personality disorder.

Dating back to the early 1960s, researchers have strived to clarify the role that childhood animal cruelty might play as a predictor of subsequent violence against humans. John Macdonald sampled 48 patients with psychotic symptoms, and 52 without. He determined that three primary characteristics — fire setting, enuresis and childhood cruelty toward animals — were consistently discovered among the individuals considered to be the most sadistic. Although he concluded that this combination of traits could serve as a strong predictor of homicidal behavior, he noted that the presence of this triad alone was of minimal value in foretelling such acts.

More recent scholarly literature has increasingly suggested evidence for a connection between animal abuse and either co-occurring or subsequent forms of interpersonal violence. Researchers are divided over the legitimacy of this supposed link. In 2001, Frank Ascione published a thorough overview of psychological, psychiatric and criminological research linking animal abuse to acts of violence against humans. He asserted that animal abuse is an often overlooked warning sign that, in addition to helping to identify youth who are themselves victims, “could help identify youth at risk for perpetrating interpersonal violence.” In 1997, Ascione and colleagues also examined the prevalence with which victims of domestic violence report various forms of cruelty perpetuated by their abusers toward their pets. In 2008, Christopher Hensley and Suzanne Tallichet emphasized an exploration of the motivations behind animal cruelty by interviewing inmates about their childhood animal cruelty crimes.

These and myriad other studies have been met with a range of criticisms, from failing to establish a verifiable link between human and animal violence to applying flawed methodologies. Regardless of what one may think of the reliability or validity of the research to date, a wholesale dismissal of the apparent relationship between animal cruelty and violence against humans seems unwise. More important, however, is that the strength of this proposal does not rest on the legitimacy of such data. Reliance on the supposed link unnecessarily detracts from the central argument that a wanton act of cruelty against a defenseless other is, on its face, egregious enough in my opinion to trump a counselor’s duty to protect a client’s confidentiality.

Why amend our duty to report?

The most obvious beneficiaries of this change in the short term would, of course, be those animals who stand to be spared from enduring abusive acts. But is it not also in the long-term interest of the perpetrator, at least potentially, to have the opportunity for reform sooner rather than later? Cultural anthropologist Margaret Mead famously commented in 1964 that cruelty toward animals “could prove a diagnostic sign, and that such children, diagnosed early, could be helped instead of being allowed to embark on a long career of episodic violence and murder.”

Furthermore, is it not ultimately in the interest of the counseling profession as a whole to err on the side of empathy for the most vulnerable and to draw an ethical distinction between the importance of confidentiality and the urgency of violent crime? Are we not all made better by extending and explicitly endorsing the reach of our ethical consideration to protect even (and, indeed, especially) those with no voice in the matter? Although none of us is currently prohibited from reporting acts of animal cruelty, I have no doubt that adding the amendment proposed here to the ACA Code of Ethics would over time contribute to the prevention of incalculable instances of undue harm.

As counselors, we are called to reflect on the broader implications of our work and on how the changes we help to facilitate contribute to a healthier quality of life. That means considering broadly the wellness of people and, from my viewpoint, the animals with whom people’s lives are so frequently intertwined. ACA’s historic endorsement of competencies for animal-assisted therapy is a heartening step forward as we adjust continually to the social, cultural and philosophical shifts of our times. I hope we will seize on the momentum of this achievement by embracing an amendment to our ethics code that is consistent with our recent progress.

This proposed amendment is consistent with our profession’s historically responsive adjustments to the societal implications of our work and to our forward-thinking recognition of the impact it can have on the world around us. As with past adjustments made to our ethics code, it is incumbent on mental health professionals to remain at the forefront of measures aimed at cultivating justice and advocacy in our service to others. The amendment proposed here would be one more step in the spirit of that legacy.

Troy Gregorino is a licensed professional counselor and certified wellness counselor.
He is a doctoral student in counselor education and supervision at University of the Cumberlands. Contact him at tgregorino@gmail.com.