Around the globe, coastlines are encroaching on communities, summer days are sweltering and reports of weather catastrophes often dominate the news media. These examples represent only a few of the monumental and pervasive environmental effects of our changing planet.

Climate change may be the most crucial issue confronting the inhabitants of our world today. The dramatic consequences that scientists have been predicting, such as rising sea levels, record-setting high temperatures and an increase in devastating natural disasters, are no longer theoretical. Although some still argue the point, climate change is now a grim reality, not a vague possibility in the distant future.

As devastating as these consequences are on our physical world, climate change also poses enormous threats to our psychological well-being. In a report released in 2012 by the National Wildlife Federation’s climate education program, with support from the Robert Wood Johnson Foundation, researchers predicted a sharp rise in mental health issues resulting from events related to climate change in the coming years. These issues include depression and anxiety, posttraumatic stress disorder, substance abuse, suicide and outbreaks of violence. The elderly, the poor, children and members of the military (and their families) were identified as being among those who will be most psychologically vulnerable.

We believe the counseling profession, which has its conceptual roots in the promotion of human growth and development, must play a more active role in addressing the mental health impact of climate change. For many decades, counselors have worked closely with countless individuals to help them achieve fulfilling careers, realize self-actualization, strengthen personal resilience and seek social justice. Recently, counselors have gained greater acceptance as valuable members of crisis and disaster response teams.

Our extensive training and experience in enhancing well-being enable us to serve as effective catalysts for positive change. Now more than ever, counselors are in a position to shape messaging and lead the way in effective prevention and intervention related to the psychological implications of climate change. This includes promoting climate resilience, strengthening disaster response programs and advocating for vulnerable populations.

In January 2016, the Department of Housing and Urban Development announced a $48 million grant to move an entire indigenous community from Isle de Jean Charles, Louisiana, before the land disappears into the Gulf of Mexico. This marks the first allocation of federal dollars to permanently move an entire community impacted by climate change. These displaced people are now known as climate refugees. The main purpose of the grant is to work closely with the inhabitants of this community through a process that will honor their choices. By empowering the people and giving voice to their preferences, choice builds resilience.

Although this tribe is the first to be formally identified as climate refugees within the United States, climate refugee status is not a new phenomenon. The crisis in Syria, for example, has become so complex and tragic that it often eclipses the fact that a climate-related drought was the catalyst for mass migration to the cities, instigating intense cultural and economic conflicts.

Climate change threatens to become a tipping point in more and more areas of the world. Between 50 million and 200 million people could be displaced by 2050, according to the United Nations University Institute for Environment and Human Security. Populations that are economically and culturally vulnerable, such as those whose livelihoods depend on farming and fishing, will feel the impact most especially.

Climate resilience is the notion that we should not wait until there is no choice and people are traumatically displaced by the effects of climate change. Instead, we can help create resilience plans so that those who are impacted have both choice and voice in the matter. The International Red Cross has embraced the notion of climate resilience as a necessary element of preparation for what is to come, and as an opportunity to anticipate the physical, psychological and cultural needs ahead. Climate resilience, which is an integral component of disaster response within the International Red Cross, places significant emphasis on trauma and mental health response.

Consider again the people of Isle de Jean Charles. Although efforts are in place to help with the transition, residents still feel a deep attachment to their home. This isle holds their cultural and spiritual history. Their identity is deeply rooted to the story of this place.

Just as we are connected to our early attachment figures, we also share a deep and abiding attachment to our early places, both individually and culturally. In a 2016 article in The New York Times, Chief Albert Naquin of the Biloxi-Chitimacha-Choctaw tribe, the ancestral residents of Isle de Jean Charles, observed sadly, “We’re going to lose all our heritage, all our culture.”

Place attachment is the powerful bond that links a person to a place. It develops throughout one’s lifetime and even evolves over centuries throughout the history of a culture. This sense of connection to a specific place provides a profound source of meaning, belonging and sustenance. Simply put, this place is one’s home. Place attachment and sense of place are often interchangeable. Place identity considers attachment in terms of emotional or symbolic meanings, as internalized and integrated into a person’s identity.

Much like other aspects of attachment that we explore with clients struggling with any number of issues, place attachment is seated in a deep part of ourselves that connects to ancestry, early recollections, sensory experiences and story. It relates to the larger question of Who am I? — a question that can be partly answered through place identity.

In North Dakota, the Standing Rock Sioux Tribe recently engaged in a battle of culture and human rights against the Dakota Access pipeline, the construction of which threatens tribal land and clean water. Many have called Standing Rock a new civil rights moment encompassing a convergence of environmental rights, human rights and cultural rights. Tribal representatives from all over North America joined the Standing Rock Sioux in an empathic and familiar stand to protect culture and identity.

Journalist Rebecca Solnit, writing for The Guardian, spent time in Standing Rock to cover the movement. She gave eloquent voice to the tribe’s heartfelt commitment and place attachment: “Victors like to forget how they got their spoils, but the despoiled have long memories.” With a growing sense of awe, Solnit observed how the tribe relied on peace and prayer, valued humility and revered their ancestors.

Place matters as an integral piece of cultural, historical, existential and personal identity. The stories of people and their places, whether in Louisiana or the Dakotas, are as important as any other attachment issues or identity concerns that we consider when we counsel our clients.

Issues that impact the planet also directly impact the people who live on the planet. At times, it seems as though conversations around environmental justice and social justice are happening with equal intensity and depth of passion but are taking place in two separate silos.

As the climate changes, families, communities and lives are affected. And as is true with so many other aspects of change, our most vulnerable neighbors — individuals with low incomes, communities of color, immigrants, indigenous peoples, children, pregnant women, older adults, people with disabilities and people with chronic medical conditions — are most subject to the impact. Understanding the issue and engaging in advocacy on behalf of the climate is also 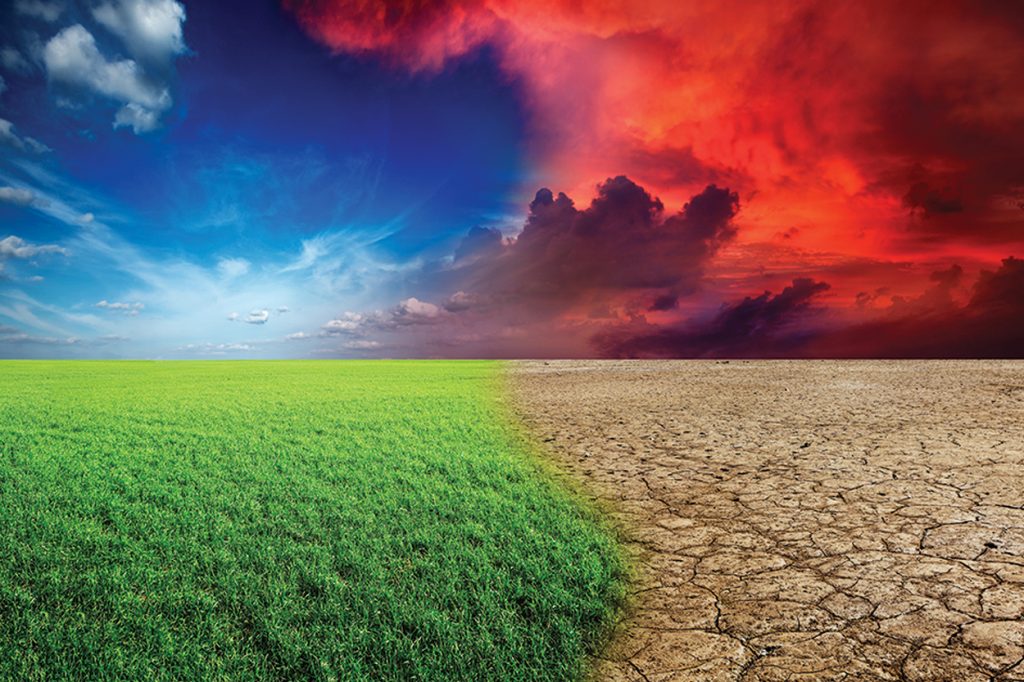 advocating on behalf of the people whose lives depend on a healthy planet. The global climate is interconnected — environmentally, psychologically, socially, culturally
and spiritually.

In 2010, the Council on Social Work Education declared sustainability and climate issues to be the social justice issues of the new century. In 2011, the American Psychological Association released a report highlighting the broad contributions that psychology could make, with continued research and advocacy, to understanding the power of the human-environment relationship. It included a call to action for scholars to bridge the gap between the science of environmental issues and the study and practice of psychology.

In a 2016 article on the ecoAffect website, psychiatrist Lise Van Susteren posed a challenge to those in the helping professions. She noted that we work with people who are faced with fears, traumas, unexpected changes and crises. We help our clients navigate this difficult terrain even as we view larger societal issues through a social justice and advocacy lens. She wonders, then, if we can ethically turn a blind eye to the approaching crises that our changing planet will bring. Do we have a duty to warn, to protect, or, at a minimum, to acknowledge that the changing climate is a significant variable in mental health?

The American Counseling Association has a long-established relationship with the American Red Cross as a model for and partner in disaster response. In 2002, the International Federation of Red Cross and Red Crescent Societies established the Red Cross/Red Crescent Climate Centre. This organization supports national Red Cross and Red Crescent Societies in their work to reduce loss of life and damage to livelihoods from climate change and extreme weather events. Goals include implementing information and education activities about climate change and extreme weather events; supporting the development of climate-adaptation activities and disaster-risk-reduction programs; and bringing concerns about the impacts of climate change on vulnerable people to the broader public. Considering the global movement toward acknowledging climate change in disaster response and preparedness, we believe it is vitally important for ACA to expand its vision for the future of disaster response.

As professionals who believe that all individuals deserve basic human and civil rights, we need to challenge ourselves to see the climate crisis as an imminent threat. Counselors are positioned to bring a trauma-informed and resilience-based perspective to the front lines of crisis and disaster response. We must recognize that environmental injustices and environmental racism — such as what we have witnessed in Flint, Michigan; with Hurricane Katrina; with the 2016 Louisiana floods; and with the standoff in Standing Rock — are enormous social justice issues.

Given our knowledge and skills as counselors, we have both the responsibility and the potential to contribute to environmental advocacy, disaster response and preparedness for building resilient communities. It is our basic duty to promote and deepen human beings’ most fundamental attachment to our natural world.

Debbie C. Sturm is an associate professor at James Madison University in Virginia and a licensed professional counselor with more than 10 years’ experience in counseling survivors of trauma and community violence. She engages in research related to nature connectedness and mental health, sense of place, the psychology of sustainability and environmental justice as social justice. Contact her at sturmdc@jmu.edu.

Lennis G. Echterling is a professor at James Madison University with more than 30 years’ experience in crisis and disaster response, supporting first responders, and international stabilization and recovery in war-torn regions. As a doting grandfather to two young boys, he believes it is important that we give greater consideration to the health of our planet and our children.