Johnnetta Betsch Cole couldn’t help but chuckling at the audacity (or, as she phrased it, the “chutzpah”) of the keynote message she was about to deliver to the thousands of counselors congregated Saturday morning at the ACA 2018 Conference & Expo in Atlanta.

With charismatic presence — and a knowing sense of humor — Cole announced to the assembled crowd, “I’m going to give some good counsel to a bunch of counselors.”

Cole followed up by saying that she wasn’t bringing new words of wisdom. Rather, she said, “You’re going to have affirmed what you already know but what you may not be acting on.” 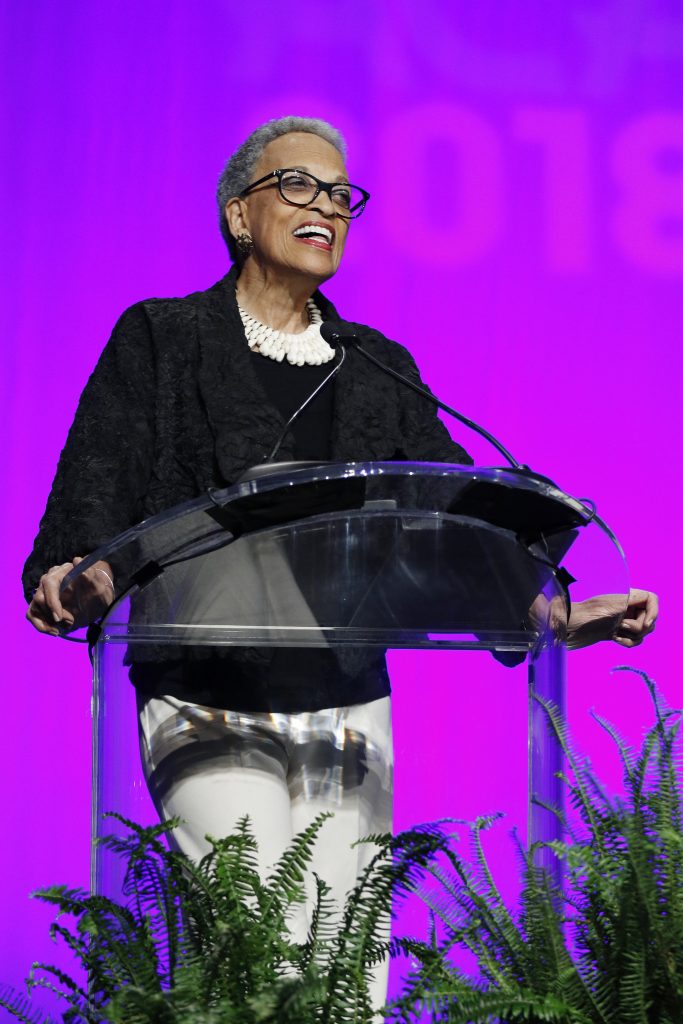 An educator, anthropologist and humanitarian, Cole was the first African-American woman to serve as president of Spelman College and later served as president of Bennett College. Spelman, in Atlanta, and Bennett, in Greensboro, North Carolina, are two historically black colleges that are dedicated exclusively to educating black women. Cole was also the director of the Smithsonian’s National Museum of African Art. In introducing her to conference attendees, ACA President Gerard Lawson noted that Cole “has tangled with inequality in all its forms.”

Cole opened by welcoming the “sisters, brothers and siblings all” in the audience. In a nod to her training as an anthropologist, Cole said that she was purposely using “kinship terms” in her greeting. “I know that kinship is about much more than blood,” she said, explaining that it is really about how people are connected by their shared values and beliefs. Among the values she knows that counselors share, she said, is the belief that “every child deserves the right to soar to the heights of their possibilities” and the worth of the extraordinary diversity among all human beings.

Cole then proceeded to remind the counselors in the room of some truths they already know but may need to rededicate themselves to in their practice.

First, Cole said, “It is immensely important for you to truly know the folks you are working with — their struggles, their lives and their culture. … You cannot be an effective counselor unless you genuinely find a way to walk in their moccasins or roll in their wheelchair” or understand what it is like to be someone who is transitioning genders.

Second, she said, “To serve as an effective and compassionate counselor to others, you first need to really know yourselves.” This involves a significant amount of soul searching and engaging in personal therapy, Cole acknowledged, but it also requires “understanding and owning your unconscious biases.”

Every single human being possesses these unconscious biases, Cole said, and they affect how we view and evaluate others and ourselves. “We’ve got to be aware of our unconscious biases. Why?” asked Cole. “So we can mitigate against them.”

Third, as counselors work with students and clients from marginalized groups in society, Cole said, it is extremely important to help these individuals “acknowledge, own and execute their power … to become champions for themselves and for their community, their nation and the world.”

Cole recalled a middle school teacher who helped her to realize and claim this power in her own life. Cole was attending a private school where almost all of the teachers were white, including this particular Latin teacher, Miss Morris, whom Cole remembers as having “tightly permed hair with too much blue rinse in it.”

At this particular age, Cole said, she was beginning to “feel my power,” and she decided to direct it against Latin itself, organizing “her girls” to disrupt the beginning of class with a rhyme about how the rigors of Latin was killing them. After two days of this, Miss Morris stopped the girls and told them that they weren’t there to learn Latin. Using the language of the day, she told them, “You’re in this class to learn that, as negro girls, you can learn anything.”

“That is a message that we should give to every child,” Cole said.

That message should also stir up something in us to claim and use our own power to effect change in our own lives and communities, Cole said, adding that there is no shortage of issues in our society needing nonviolent action on the part of people.

When encouraging people to tap into their power, Cole likes to reference an African proverb: “If you think you’re too small to make a difference in the world, you’ve never spent the night in a closed room with a mosquito.”

In closing, Cole gave the counselors one last reminder: “Each of you is in the business of teaching your clients and students how to take better care of themselves. But in addition, dear counselors, you’ve got to take good care of yourselves.”

Cole then asked for the house lights in the ballroom to be brought up and requested each of the counselors who were able to stand. She told them to get in a comfortable stance, to bring their right arm across their body and then their left – and then to give themselves a big hug.

“I’m asking you to do better at loving and empowering yourselves,” Cole said to the attendees. She then asked them to take that message of care and empowerment to their students and clients so that they, in turn, could work to improve their communities, put a message of love and respect into action, and pursue social justice throughout society.

Cole may have been preaching to the choir, but her message unquestionably rang clear and true. 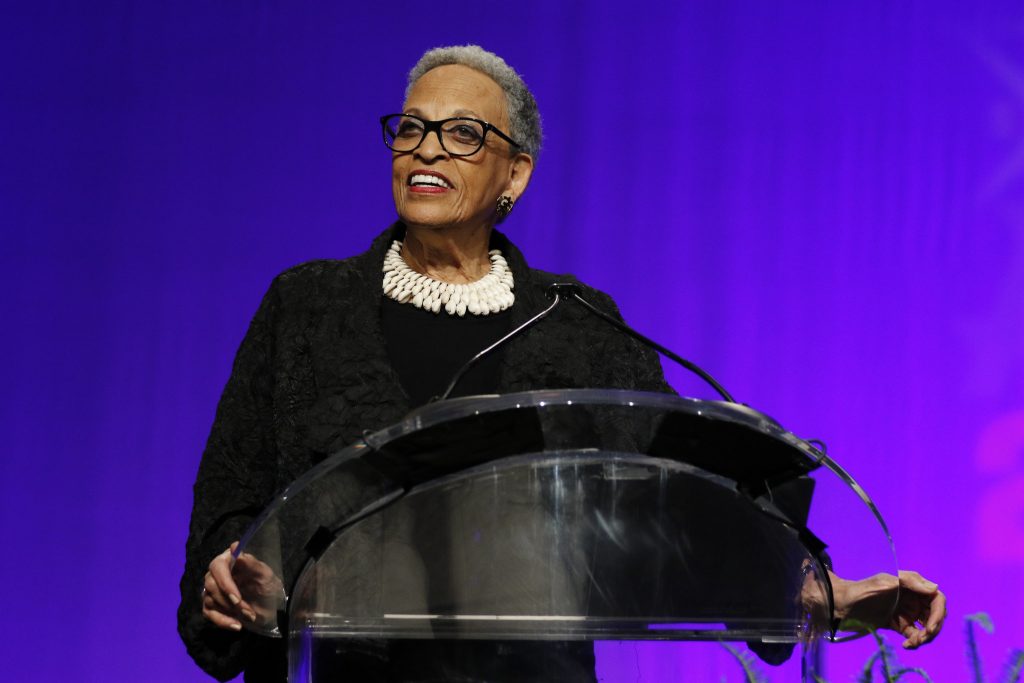 Jonathan Rollins is the editor-in-chief of Counseling Today. Contact him at jrollins@counseling.org.

The ACA 2018 Conference & Expo in Atlanta began with an ACA Governing Council meeting mid-week; festivities stretch through the weekend.

Find out more, including information on live streaming, at counseling.org/conference

See more photos from conference on the ACA Flickr: bit.ly/1MOAysM 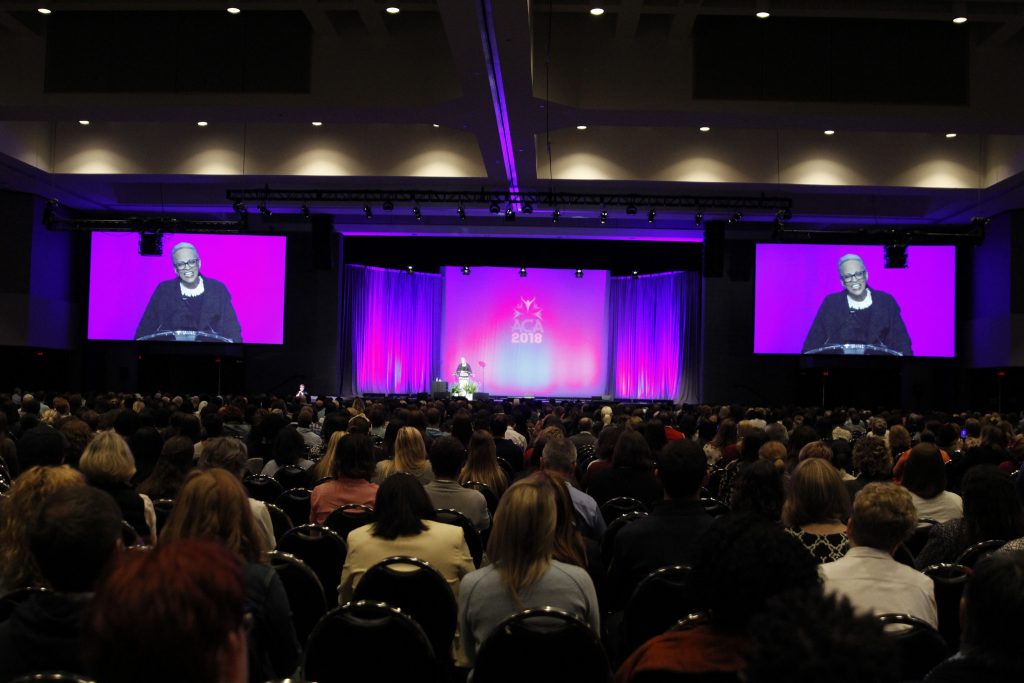