Having kids and young adults train rescue dogs isn’t technically animal assisted therapy, but for the kids—and dogs—involved in the Teacher’s Pet program, the result has definitely been therapeutic.

The youth —with the help of professional animal trainers— use positive reward-based training to increase local rescue dogs’ chances of being adopted. In return, working with the dogs helps the students develop patience, empathy, perseverance and hope, says Amy Johnson, the creator and executive director of Teacher’s Pet, a Detroit-area non-profit program.

The idea for the program was born when Johnson, a former public school teacher, was working as a dog training instructor at the Michigan Humane Society. Johnson, an American Counseling Association member, wasn’t sure what the training would look like at first — she simply knew 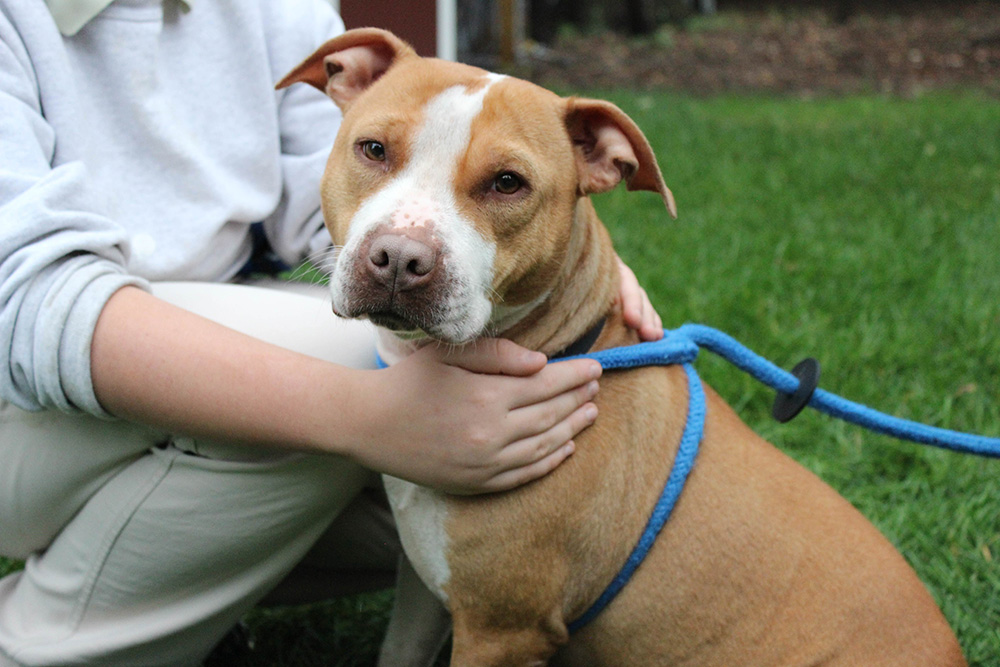 Images courtesy of Teacher’s Pet. Identifying features of (human) participants have been blurred for confidentiality.

she wanted an intervention that would help both kids and dogs. Johnson contacted every group she could find in the United States and Canada that worked with both youth and dogs to learn more about how their programs worked. Her intent was to work with kids who — like their canine counterparts — were behaviorally challenged and often unwanted. So, not only did Johnson contact school counselors and psychologists for their input, she decided to become a professional counselor herself.

The end result was a program that is 10 weeks long and meets twice a week for two hours. Teacher’s Pet currently works with teens from an alternative high school and three detention facilities and young adults, aged 18-24 at a homeless shelter, says Johnson, a licensed professional counselor. At each facility (except for the homeless shelter), the training takes place on site. Participants from the homeless shelter are brought to an animal shelter to complete the program.

The program’s group facilitators are all professional trainers and they choose only dogs with good temperaments to participate, says Johnson, who is also the special projects coordinator and director of the online animal assisted therapy certificate program at Oakland University in southeast Michigan. Before the participants begin working with the dogs, the facilitators give them some safety training.

“We spend the first day going over body language and stress signals,” Johnson says. “They meet the dogs on day two, after one more hour of dog body language education.”

Other safety measures include limiting the number of dogs — five or six per class of 10 students — and keeping the dogs on long tethers placed 10 feet apart so that they can’t interact with each other, she says. There are also always at least four trainers in the room and the dogs are closely monitored. If a dog gets overexcited, is struggling to get off the tether or barking at another dog, a trainer will remove it from the room, Johnson says. 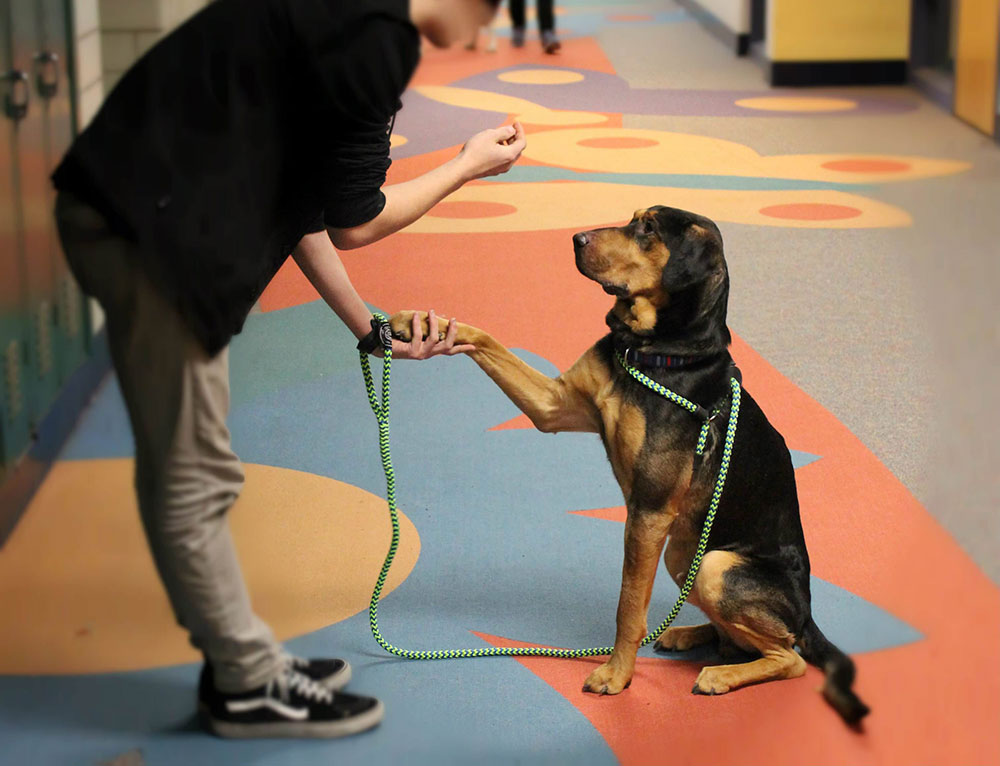 At the beginning of each session, the lead facilitator goes over the goals for the session, such as teaching the commands “sit,” “stay” or “down,” learning to walk on a leash or not jump for the food bowl. The individual trainers explain how to teach the commands and let the teens or young adults do the actual training as they supervise. The dogs are never forced to participate—if an individual dog is nervous or reluctant, the goal for the day is to establish trust and confidence, she says.

Johnson says that sometimes dogs that come off the streets have specific problems like trembling when people walk by. In that case, the students will sit with the dog until it becomes more comfortable and then start with small steps like going for a brief walk outside.

As participants are teaching the dogs new behavior, often their own behavior changes, she says.

In particular, a lot of the teens and young adults who participate have poor communication skills, Johnson says. For instance, some are so shy that they don’t project their voices and the dogs don’t respond to their commands. The participants have to learn to speak firmly and assertively, and to demonstrate a sense of command by standing up straight. One boy told Johnson that he decided to test the tone of voice and body language he used with the dogs on his peers to see what would happen. Imitating the behavior he used with the dogs gave the boy more confidence and he found it easier to interact with his peers, she says. 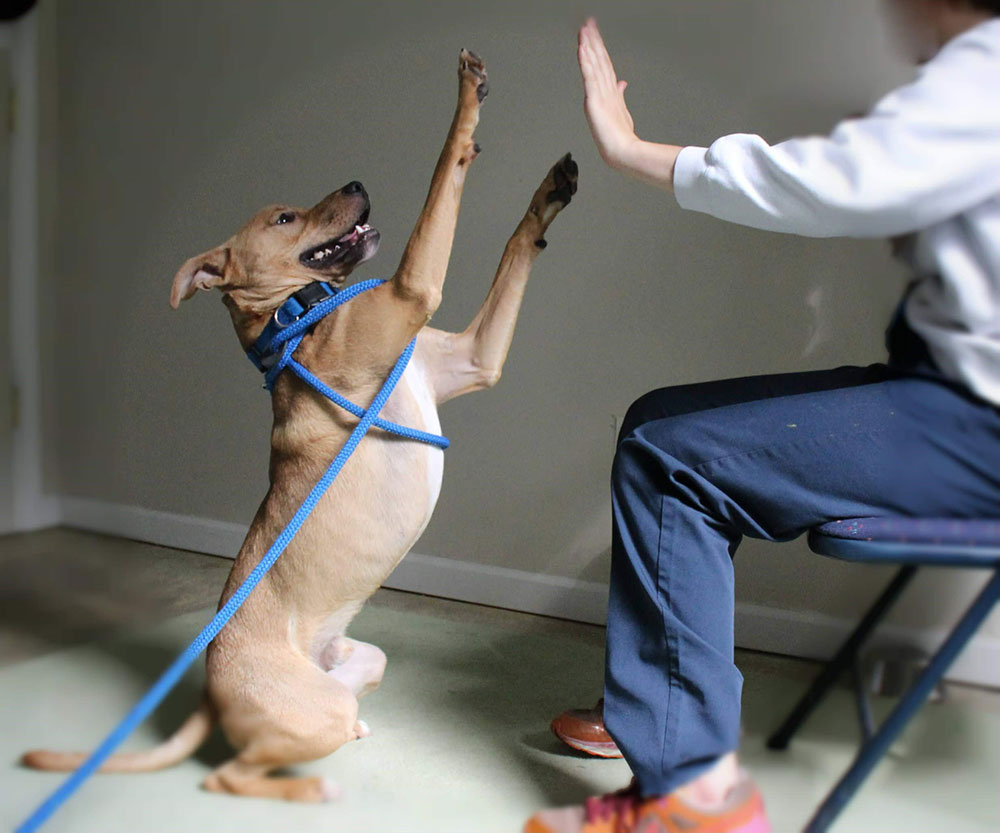 Johnson describes another boy who was very angry, had little patience and low impulse control. He had a soft heart and would choose dogs that were struggling, which told Johnson that he was projecting his anger.

“Inside he was like the dogs [scared],” she says. So the trainers paired the boy with a dog that was afraid of men. His job was to make the dog like him, Johnson explains. The boy had to be patient and sit with the dog. As the dog got calmer and more confident, the boy would gently encourage it to move closer and closer. By the end of the program, the dog was joyfully playing with boy.

Johnson says that the program facilitators coordinate with the participants’ counselors when possible, so that if they are struggling with particular problems — such as patience or impulse control — training sessions can include activities that help address those difficulties.

The teens and young adults also learn from each other. The first hour of each session is devoted to training and the second to journaling and “debriefing” — talking as a group about what worked and what didn’t.

Johnson believes that even just the oxytocin release that comes from spending time with the dogs is highly beneficial. The program participants are often deprived of loving human touch and the dogs will lick and hug and make them laugh — reducing their anger and anxiety.

As the program draws to end, saying goodbye isn’t easy, but that in itself can be a lesson learned, Johnson says. The students start to detach from the dogs a little bit, and they’ll talk about how that is a normal part of processing grief and loss, she says. The kids also write letters to potential adopters  touting the dogs’ accomplishments.

When the program is over, the teens and young adults say goodbye to the dogs and learn that they can say goodbye and not have it be the end of the world, says Johnson. The participants also get lots of pictures of themselves with the dogs and a certificate for the wall. Many former students have told Johnson that they keep a picture of themselves and the dog they trained on their dressers.

“I had a youth email me seven years later and ask me for another copy of his certificate because his was in a storage unit that was auctioned off,” she says.

Many graduates want to volunteer with Teacher’s Pet for adoption and other events, Johnson says. The organization also remains a resource for the students — they can get letters of recommendation or basic things like clothes for school or school supplies if needed.

Johnson says that Teacher’s Pet is also currently working with the American Society for the Prevention of Cruelty to Animals (ASPCA) on a longitudinal study to determine if the program produces behavioral changes in the kids, and if so, for how long. 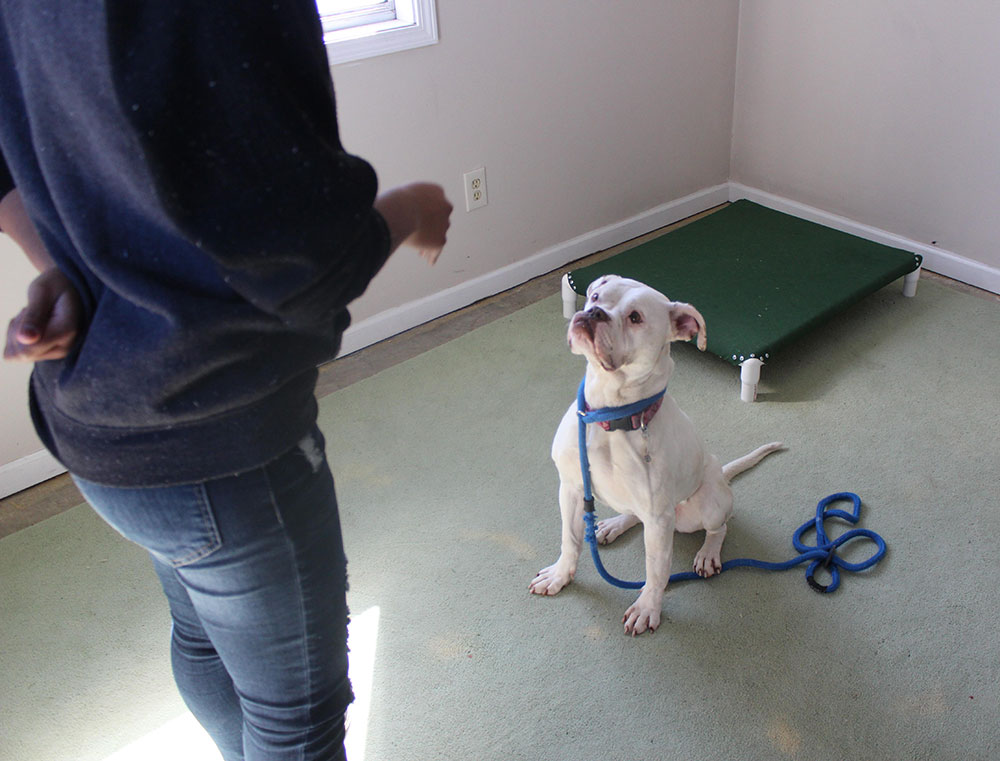 Related reading, on therapeutic power of the human-animal bond, from the Counseling Today archives: “The people whisperers”