He was the only student in my class who didn’t turn his papers in on time. He was constantly late and regularly fell asleep in class. I felt insulted by his seeming lack of respect for my classroom, for me and for our discipline. If I could have dropped him from the class, I would have. I almost resented the days he showed up.

But he wasn’t truly lazy, and he wasn’t intentionally disrespectful. Instead, he was a struggling member of the third group of invisible people I am highlighting in this series. It had never occurred to me that this student might be homeless, but a conversation with one of my colleagues opened my eyes to his situation. What I learned totally changed the way I saw him. I had been so blind.

The student was the eldest of three siblings who had been living with their mother in a homeless shelter. Mom had married young and had no job skills. When her husband left her, she had no money to pay the rent for their meager apartment. After months of eviction notices, the movers came in and swept everything in the apartment to the curb in less than an hour.

His mother spent the rest of that morning trying to find a place for them to stay. In the meantime, thieves helped themselves to their unsecured possessions on the curb. An afternoon rain had soaked their clothes, bedding and personal belongings. Much of what they owned was ruined. When my student and his siblings came home from school, they found their mother sitting on a broken dresser — dropped by a member of the eviction team — guarding what possessions they had left.

My student slept on a cot in a large room with several other families in the shelter. There was no place to store things other than under their cots, and things put there were often pilfered by other residents. Even an old pair of shoes might be better than those someone was already wearing.

Common bathrooms meant lines, especially in the mornings as my student tried to ready himself, wearing one set of clothes one day and his second set the next. Like others in the shelter, he washed out what he could in the sink, hoping the clothes would dry on the end of his cot by the next day.

This family was homeless because of divorce and a thoughtless ex-husband. Divorce happens to almost half of the U.S. population, so there was nothing unusual in that circumstance alone. My attitude toward my student made it clear I hadn’t even considered that there might be much more to his story.

Many of the people who are homeless in our nation struggle with addiction. Others are seriously mentally ill. To save money many years ago, my home state decided to get out of the mental health business. Mental health patients who were deemed not to be a risk to self or others were sent home or let out on the street, and the facilities closed. Some families couldn’t care for their family members who were mentally ill, and these individuals became nomads. 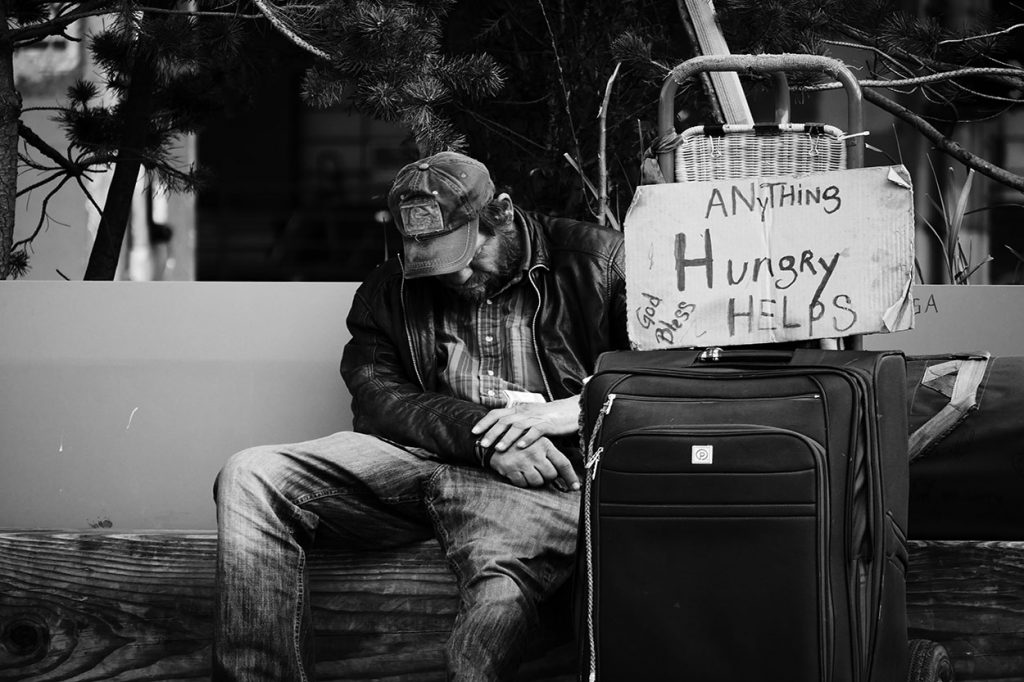 But there are also many people who are homeless who have merely fallen on hard times. Some men and women travel from one state to the next in search of job opportunities that might enable them to settle down with their families. They spend their nights in shelters, doorways, alleys or their cars.

Those who want to pull themselves out of the abyss of homelessness are met with barriers at every turn. Businesses don’t want them warming themselves in their shops. Cynical pedestrians cross the street to avoid saying, “I don’t have any money for you.” Esteem is further eroded by words such as, “You’ll just spend it on drugs.”

Services for those who are homeless are often inaccessible. For example, in Atlanta, the labor pool (where men and women go to find work) was many blocks away from where most shelters were located. It was smarter to sleep under a nearby bridge, thus possibly being first in line the next morning. Better that than to sleep in a shelter and not being allowed to leave until 7 a.m., thus risking being at the end of long lines and having less chance of securing a job for the day.

People who are homeless can also be stalled by people like me — a college professor and professional counselor who should have known better. My student had no place to study at the shelter, no place to keep his homework, and no money to buy his books. With limited transportation options, he was perpetually tardy. And he was exhausted all of the time from caring for his family, working when and where he could, and getting insufficient sleep in the crowded shelter.

Our clients who are homeless need transportation, food, clothing and jobs. I know that we aren’t social workers, but those who work with the homeless have to think pragmatically.

I’m glad that I learned about this student’s story — which has a happy ending. He and his family got back on their feet, he graduated from college, and life is better. It frightens me to think how many other people I might not have seen clearly, however, because of my cultural blindness.

Dear readers: I would value hearing from you if you found this series on cultural awareness (invisible people) helpful. My primary writing goal is always to help us do our jobs better. You help me do that with your comments, questions and ideas.

Previous articles in this series: