Access to mental health care varies greatly depending on where one lives in the United States. This variance is so great that Mental Health America (MHA) referred to the situation as a “maldistribution” of behavioral health providers in a recent report.

In Massachusetts, there is a mental health provider for every 180 residents, which marks the best ratio in the nation. On the other end of the spectrum is Alabama, which has the nation’s worst ratio at 1,100 residents for every one mental health provider. Texas, West Virginia, Georgia, Arizona, Tennessee, Mississippi and Iowa are the others states that have ratios of 700:1 or worse. 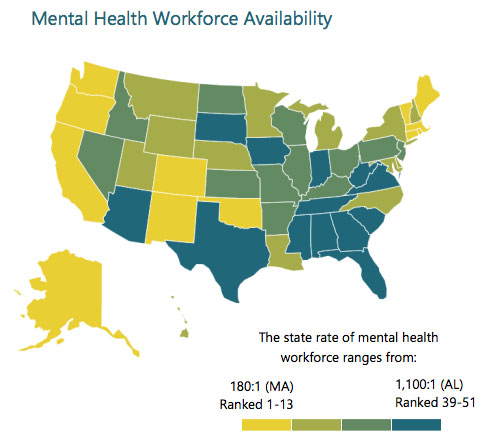 MHA, a Virginia-based nonprofit advocacy organization, compiles a report of mental health indicators each year from nationwide survey data, including information from the Substance Abuse and Mental Health Services Administration and the Centers for Disease Control and Prevention. In tabulating its ratios, MHA included counselors, psychiatrists, psychologists, licensed clinical social workers, marriage and family therapists, and nurses specializing in mental health care in its definition of mental health provider.

MHA’s report, The State of Mental Health in America, was released in September.

When weighing access to mental health care and insurance against prevalence of mental illness, substance abuse, suicidal ideation and other factors, MHA ranked Pennsylvania, New York, Vermont, Rhode Island and Maryland as the top five states (in that order) for mental health in its most recent report. Nevada was ranked last in MHA’s list, preceded by Oregon, Idaho, Utah and Wyoming.

The organization also recognized Rhode Island as rising from 27th to fourth in its overall rankings over the past six years. In contrast, Alaska has gone from 17th to 46th, Kansas from 18th to 42nd, and North Carolina from 16th to 35th during that same time period.

MHA tracks a number of other mental health indicators in its annual report, including statistics on youth and adults with substance use disorders, depression and suicide, as well as insurance coverage and rates of treatment and other data. MHA notes that rates of overall mental illness (defined as “having a diagnosable mental, behavioral or emotional disorder, other than a developmental or substance use disorder”) among American adults have remained relatively stagnant, increasing from 18.19% to 18.57% between 2012 and 2017. However, suicidal ideation among adults rose from 3.77% to 4.19% over those six years.

When it comes to mental health, how does your state stack up?

View the full report and state rankings at mhanational.org 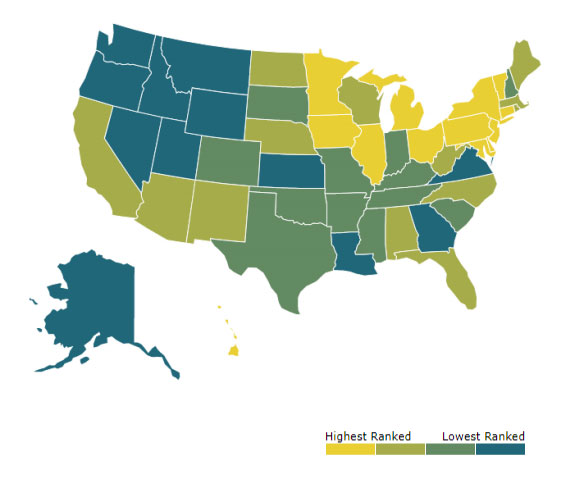