Your voice matters. Those who doubt the power of speaking out and advocating for the profession need only look to the counselors of Michigan. This fall, approximately 10,000 licensed professional counselors (LPCs) participated in a grassroots campaign that thwarted an attempt to take away their ability to practice.

On Friday, Sept. 13 — some would say an appropriately ominous date — Michigan’s Department of Licensing and Regulatory Affairs (LARA) released a notice of public hearing for comments on proposed changes to the state rules that define the scope of practice for LPCs. The notice served as confirmation that despite the objections of the state’s board of counseling and months of protest from local advocates, LARA was moving forward with its plan not only to change, but also to repeal, virtually all of the previous rules governing scope of practice. Most critically, the proposed changes would repeal LPCs’ practice of “counseling techniques” and ability to “diagnose and identify the problem.” In other words, LARA intended to strip away Michigan LPCs’ rights to diagnose clients and practice psychotherapy.

Absent this ability to diagnose, neither counselors nor clients would be able to seek insurance reimbursement — a devastating blow to practitioners. But the damage wouldn’t stop there. LARA’s proposed repeals would have threatened the very existence of the counseling profession in Michigan by taking away LPCs’ right to provide psychotherapy. How do counselors who can’t counsel practice? The answer: They don’t.

“The ramifications [if LARA was successful] would’ve been that 10,000 counselors would be unable to practice legally,” says Michael Joy, president of the Michigan Counseling Association (MCA). “They essentially would have lost their jobs.”

Joy, a member of the American Counseling Association and an LPC in private practice, adds that LARA’s repeal would have also left up to 150,000 clients in the lurch. With their counselors unable to practice, clients would have needed to seek treatment from other therapists. Because most of Michigan’s mental health practitioners are already carrying heavy caseloads, the search could have taken months, during which time these clients would not have been receiving help, Joy continues. This rupture in the continuity of mental health care would have been a significant therapeutic setback and could have potentially endangered clients’ well-being, he asserts. Those with more acute symptoms might even have needed hospitalization, he says.

LARA’s interest in changing the scope of practice rules for LPCs in Michigan is not new. Many veteran counselor advocates had been bracing for an official proposal for years and were working on several fronts in hopes of preventing a crisis. Although advocates attempted to work with LARA, the Michigan Mental Health Counselors Association (MMHCA) —a former division of MCA —initiated a backup line of defense by engaging a lobbyist and appealing to the state Legislature.

In March 2019, House Bill 4325 was introduced in the Michigan Legislature. Its aim was to create a statute updating the scope of practice and licensing requirements for LPCs, thus ensuring that counselors would retain their ability to diagnose and treat clients. HB 4325 would supersede LARA’s proposed changes. The bill had strong bipartisan support and was steadily making its way through the Michigan Legislature, but there were questions about whether it would pass in time.

The clock was ticking — loudly.

“Really, no one exactly knew that the trigger was going to be pulled until there was that public announcement [from LARA], and so then, the madness actually began,” explains Stephanie T. Burns, an LPC in both Michigan and Ohio and an active member of ACA, MCA and MMHCA. “LARA had made their proposals, and the Michigan Board of Counseling at that point had unanimously vetoed all the changes and, in response to that, the powers that be at LARA decided to just go ahead and put them forward anyway …”

If LARA was not swayed by the comments and testimony given at the public hearing in October, the repeal of the counselors’ scope of practice could have become effective as early as November. Michigan LPCs needed to fight hard and fast for their jobs. And they did.

A groundswell of advocacy was triggered as news of LARA’s plan spread. MCA sent out a distress signal to the American Counseling Association (ACA), whose government affairs team swung into motion. Brian Banks, ACA’s director of public policy and intergovernmental affairs, began strategizing with MCA to formulate a plan. ACA sent out a VoterVoice email alert — which guides subscribers through the process of contacting legislative representatives on federal and state issues — to its members in Michigan. The ACA government affairs team expanded the call to action by posting advocacy alerts targeting all Michigan counselors on Twitter and Facebook. ACA also reached out to the Michigan branch of the National Association of Social Workers, the Michigan Primary Care Association and the national offices of the National Alliance for Mental Illness and the American Federation of State, County and Municipal Employees. MCA began circulating a petition and lining up members who were ready to testify at the LARA hearing to the countless clients they had helped and the lives they believed they had a hand in saving. MMHCA also urged members to testify at the hearing in person if possible or, if not, to email their written testimony to LARA before Oct. 4.

In the meantime, Burns, an associate professor of counselor education at Western Michigan University, began spreading the word among alumni and colleagues about the threat to all LPCs and the urgent need to contact LARA and state legislators. In addition to engaging in her own advocacy work, Burns teaches her students how to advocate effectively, so she had already formulated action steps and language — posted as a template on MMHCA’s website — for email and letter appeals.

Thousands of counselors responded to the call to action ahead of the hearing, pelting LARA with protests and urging their representatives to move forward and approve HB 4325. And on Oct. 4, counselors bombarded the hearing. In fact, the turnout exceeded the venue’s fire code restrictions, so not everyone who showed up was able to come inside, according to Joy.

“ACA wants to support our members and the profession at the highest level,” Banks says. “Being in Michigan to support the profession was a vital step in showing LARA and the Legislature how important these issues are.”

ACA’s statement emphasized the critical role that LPCs play in providing mental health and drug abuse treatment to the residents of Michigan. Preventing counselors from treating clients would greatly exacerbate the shortage of mental health providers, particularly in rural areas of the state. In addition, LARA’s actions would have created a violation of ACA’s code of ethics, which requires that counselors make a proper diagnosis before providing treatment.

Burns also focused on the ACA Code of Ethics in her written messaging and when meeting with the Michigan Senate Health Policy Committee. She specifically referenced the part of the ethics code that says professional counselors cannot abandon or neglect their clients. “I said [to the committee], ‘LARA will be responsible in that moment for causing harm — serious harm — to our clients.’” 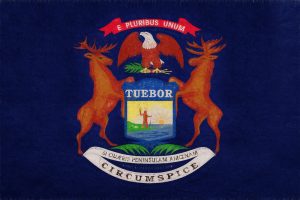 In the end, the combined efforts of MCA, MMHCA, ACA and — most importantly — thousands of counselors from across the state paid off. In October, both houses of the Michigan Legislature voted unanimously to pass HB 4325. On Oct. 29, the bill was signed into law by Gov. Gretchen Whitmer.

Burns and Joy both praised ACA for its assistance, in particular noting its decision to send Banks to testify in person at the hearing rather than merely submitting the statement from afar. Joy adds that the knowledge he gained at ACA’s Institute for Leadership Training helped him to form an effective course of action for MCA.

“Michigan is a perfect example of how grassroots advocacy works when effectively organized,” says Banks, adding that the campaign was one of the strongest he’s seen in his 20 years in the field.

Sometimes it takes a Michigan-sized crisis to spur large-scale grassroots efforts. But Burns and Banks urge counselors not to wait. The profession is facing numerous critical issues — such as the fight for Medicare reimbursement. Lawmakers and regulatory officials will make decisions about the profession with or without counselors’ input, Banks emphasizes.

“We have to have a seat at the table.”