When work stress becomes overwhelming, a knee-jerk reaction may be to dust off your resume and search for a new job. You may even fantasize about walking out and throwing in the towel to rid yourself of a micromanaging boss, an abrasive co-worker or an unrealistic workload.

But will leaving a stressful work situation solve the problem?

Not always. Professional counselors say that leaving a job without considering the full picture of what is stressing you out – both at work and in your personal life – may not eliminate all of your discomfort.

Stress can quickly resurface if a person switches jobs to a position that isn’t a good fit for them or doesn’t address underlying issues that are affecting their mental health, such as unprocessed grief or past trauma, says Sharon Givens, a licensed professional counselor (LPC) who specializes in career development and mental health.

“We need to make sure we understand the root of a client’s stress. Look at the long term and not just the transition of leaving a toxic situation,” says Givens, whose private practice has offices in Columbia, South Carolina, and Charlotte, North Carolina. “They need to transition to somewhere they can sustain and not just make a move.”

A counselor’s role should never be to suggest that a client leave or stay at a particular job. However, a counselor can be a guide and support as a client steps back to assess what is out of 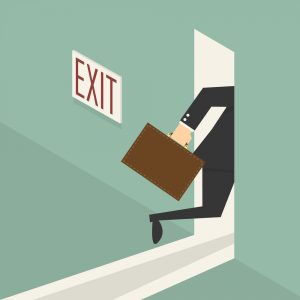 balance in their life and creates goals to move toward the life they want to live, says Givens, president-elect-elect of the National Career Development Association, a division of the American Counseling Association.

Hunter acknowledges that some clients may not have the option to leave a position if job options are scarce in their area, especially if their financial situation wouldn’t be able to sustain the transition until paychecks begin to come from a new employer. Counselors can help these clients make healthier choices about staying, Hunter says. “They can stay because they have reasons and not just stay without intention.”

For some clients who come to counseling for help dealing with work-related stress, “work may simply be non-negotiable,” adds A. Renée Staton, an LPC and professor in the counseling program at James Madison University in Harrisonburg, Virginia. “There may be no way out because it’s the only opportunity, the only game in town. It’s important to acknowledge that it’s a reality for many of our clients.”

Counselors can give clients “the space to acknowledge that this [work situation] is difficult … and normalize that [stressful] feelings come and go, and we deserve our own self-care and respect as we encounter these challenges,” Staton says.

In sessions with clients, Givens relies on an array of counseling tools to help clients identify the ways their job is affecting them and to arrive at the best decision for them based on facts rather than emotion.

“We take a step back and look at the variables of what they can change and can’t change. After mapping it out, I will ask, ‘What do you think is the best for you?’” she says. “I put the question back on them so they can ultimately make the decision. It needs to be based on symptoms and facts versus ‘I feel like.’ [We look at] what is actually happening, what are the symptoms and, then, what are your options?”

Jennifer Linnekaste, an LPC who specializes in career counseling and helping clients with work-related trauma at her practice in Oslo, Norway, recalls one client who worked in an engineering firm and came to her because he felt he was stagnant in the position he had held for 15 years. “Tom” (not his real name) felt like he had no energy. He had come to dread the thought of being assigned new projects at work and “a never-ending string of meetings that felt pointless in nature to him,” says Linnekaste, an adjunct professor (teaching online) for Regent University in Virginia Beach and Old Dominion University in Norfolk, Virginia.

Conversations in counseling sessions revealed that Tom went into engineering as a career because he was drawn to the field’s focus on design and creativity. However, his job role had evolved away from the more creative, collaborative aspects that he enjoyed when he first began working for the firm. Roughly five years prior, new management had taken over and introduced new technology that allowed employees to work online and connect remotely.

“At first, Tom said he was checking email occasionally in the evening after [his] kids were settled or in bed. Then, the expectations began to increase,” Linnekaste recalls. “There was far more documentation, and he was moved into a task that involved more quality control – checking to make sure the people under him had done their jobs. He said he hated that. Soon, he found himself in middle management and was responsible for making sure others were meeting their deadlines. As someone who self-professed to be a perfectionist, Tom felt anxious about whether his team members would deliver. It began to consume him, worrying about whether the project would get done because he was the one who was responsible. His supervisor was a positive yet hands-off type of leader. As a result, Tom didn’t feel that he had the tools to manage things well. He also struggled with trying to communicate with those below and above him.”

After one particularly stressful meeting with his supervisor, Tom reported feeling completely overwhelmed and inept in his job. After the meeting, he told Linnekaste, he had “just wanted to walk out the door and never work there again. When I asked how he has persevered to this point, he said sheer willpower and a fear of not having a job. It was clear to me that he was surviving rather than thriving.”

“He came to me because he was wondering whether he should just leave and start somewhere new, but he had several concerns: 1) He actually liked the company and the people he worked with for the most part; 2) He was paid well; 3) He was unsure whether the ‘grass was greener on the other side’; and 4) He was uncertain whether he would be happy if he made a change,” Linnekaste says. “In order to help him make a decision, I felt he needed to have a good conceptualization of the problem and more information to move forward. We agreed on one thing: keeping the status quo was not sustainable [for] his mental health.”

From there, Linnekaste dove into a full assessment with Tom in counseling sessions, asking about his personal and family life, values and role models. The more they talked, the more it became clear that Tom was unhappy because he had lost the ability to be creative – one of his most valued attributes – at work.

Using this as a guide, Linnekaste helped Tom come up with a plan to seek creative work. The first step was to approach his supervisor and explain that his talents were best suited for creative work, not managing others. He planned to ask if there were different roles or tasks he could transition to within the company that would allow for creativity and design work. If his company wouldn’t allow him to change his role, then Tom would begin to search and apply for new jobs that offered creativity.

When Tom returned to counseling after approaching his supervisor, Linnekaste remembers that he smiled as he talked about how well the conversation had gone. His supervisor had been understanding and mentioned a new contract that was coming in that involved designing a new product.

“Tom told his supervisor that he was struggling with the management piece but didn’t want to be demoted. So, the supervisor stated that he was going to enroll him in a management course, as well as assign him a deputy manager that would handle the tasks related to quality assurance and benchmarks. Tom appeared energized and excited,” Linnekaste recalls. “He said, ‘You know, I had forgotten how much cooking was a passion for me. This past week, feeling better about the job front, I enrolled in a cooking class. I also told my wife I would like to have friends over once a month for dinner. We could have themed dinners where I try out different main dishes and they can provide the side dishes.’ When I asked about emails after work, etc., he said that they [didn’t] feel as overwhelming now to answer. He said he [was] going to put a hard boundary on not doing work on weekends, but he [felt] energized about being able to take on his new project.”