Racial disparities, or unfair differences, within the system of mental health are well documented. Research indicates that compared with people who are white, black, indigenous and people of color (BIPOC) are:

Regarding racial disparities in misdiagnosis, black men, for example, are overdiagnosed with schizophrenia (four times more likely than white men to be diagnosed), while underdiagnosed with posttraumatic stress disorder and mood disorders. Additionally, concerns are compounded by the fact that for BIPOC, mental health care is often provided in prisons, which infers a multitude of issues.

BIPOC are overrepresented in the criminal justice system, as the system overlays race with criminality. Statistics show that over 50% of those incarcerated have mental health concerns. This suggests that rather than receiving treatment for mental illness, BIPOC end up incarcerated because of their symptoms. In jails and prisons, the standard of care for mental health treatment is generally low, and prison practices themselves are often traumatic.

The vast majority of mental health treatment providers in the United States are white. For example, approximately 86% of psychologists are white, and less than 2% of American Psychological Association members are African American. Some research has demonstrated that provider bias and stereotyping are relevant factors in health disparities. For nearly four decades, the mental health field has been called to focus on increasing cultural competency training, which has focused on the examination of provider attitudes/beliefs and increasing cultural awareness, knowledge and skills.

Despite such efforts, racial disparities still exist even after controlling for factors such as income, insurance status, age, and symptom presentation.Established barriers for BIPOC are the following:

In addition to emphasizing culturally competent services, other recommendations to bridging the gaps and addressing barriers have largely focused on diversifying workforces and reducing stigma of mental illness in communities of color.

One area not often noted is the historical (and traumatic) context of systemic racism within the institution of mental health, although it is well known that race and insanity share a long and troubled past. This focus may begin to account for how racial differences shape treatment encounters, or a lack thereof, even when barriers are controlled for and the explicit races of the provider and client are not at issue.

In the United States, scientific racism was used to justify slavery to appease the moral opposition to the Atlantic slave trade. Black men were described as having “primitive psychological organization,” making them “uniquely fitted for bondage.”

Benjamin Rush, often referred to as the “father of American psychiatry” and a signer of the Declaration of Independence, described “Negroes as suffering from an affliction called Negritude.” This “disorder” was thought to be a mild form of leprosy in which the only cure was to become white. Ironically Rush was a leading mental health reformer and co-founder of the first anti-slavery society in America. Rush did observe, however, that “the Africans become insane, we are told, in some instances, soon after they enter upon the toils of perpetual slavery in the West Indies.”

In 1851, prominent American physician Samuel Cartwright defined “drapetomania” as a treatable mental illness that caused black slaves to flee captivity. He stated that the disorder was a consequence of slave masters who “made themselves too familiar with the slaves, treating them as equals.” Cartwright used the Bible as support for his position, stating that slaves needed to be kept in a submissive state and treated like children to both prevent and cure them from running away. Treatment included “whipping the devil out of them” as a preventative measure if the warning sign of “sulky and dissatisfied without cause” was present. Remedy included the removal of big toes to make running a physical impossibility.

Cartwright also described “dysaethesia aethiopica,” an alleged mental illness that was the proposed cause of laziness, “rascality” and “disrespect for the master’s property” among slaves. Cartwright claimed that the disorder was characterized by symptoms of lesions or insensitivity of the skin and “so great a hebetude [mental dullness or lethargy] of the intellectual faculties, as to be like a person half asleep.” Undoubtedly, whipping was prescribed as treatment. Furthermore, according to Cartwright dysaethesia aethiopica was more prevalent among “free negroes.”

The claim that those who were free suffered mental illness at higher rates than those who were enslaved was not unique to Cartwright. The U.S. census made the same claim, and this was used as a political weapon against abolitionists, although the claim was found to be based on flawed statistics.

Even at the turn of the 20th century, leading academic psychiatrists claimed that “negroes” were “psychologically unfit” for freedom. And as late as 1914, drapetomania was listed in the Practical Medical Dictionary.

Furthermore, after slavery was abolished, Southern states embraced the criminal justice system as a means of racial control. “Black codes” led to the imprisonment of unprecedented numbers of black men, women and children, who were returned to slavery-like conditions through forced labor and convict leasing that lasted well into the 20th century.

Scientific racism early on indicates motives of control and containment for profitability. Leading health professionals propagated the idea that blacks were “less than” to justify exploitation and experimentation. The mislabeling of behavior, such as escaping slavery, as a byproduct of mental illness did not stop there. Significant transformations in defining mental illness also occurred in the civil rights era, suggesting that institutional racism becomes more powerful in the context of moments of heightened racial tensions in the collective social consciousness.

Prior to the civil rights movement, schizophrenia was described as a largely white, docile and generally harmless condition. Mainstream magazines from the 1920s to the 1950s connected schizophrenia to neurosis and, as a result, attached the term to middle-class housewives.

Assumptions about the race, gender and temperament of schizophrenia changed beginning in the 1960s. The American public and the scientific community began to increasingly describe schizophrenia as a violent social disease, even as psychiatry took its first steps toward defining 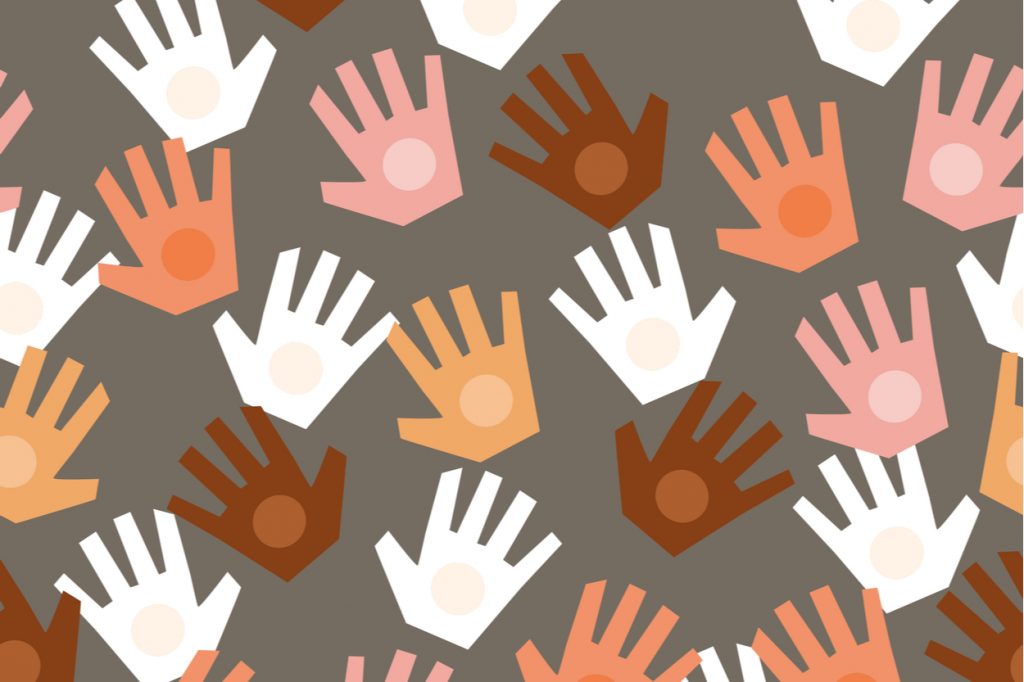 schizophrenia as a disorder of biological brain function. Growing numbers of research articles asserted that the disorder manifested by rage, volatility and aggression, and was a condition that afflicted “Negro men.” The cause of urban violence was now due to “brain dysfunction,” and the use of psychosurgery to prevent outbreaks of violence was recommended by leading neuroscientists.

Researchers further conflated the symptoms of black individuals with perceived schizophrenia of civil rights protests. In a 1968 article in the esteemed Archives of General Psychiatry, schizophrenia was described as a “protest psychosis” in which black men developed “hostile and aggressive feelings” and “delusional anti-whiteness” after listening to or aligning with activist groups such as Black Power, the Black Panthers or the Nation of Islam. The authors wrote that psychiatric treatment was required because symptoms threatened black men’s own sanity as well as the social order of white America.

Advertisements for new pharmacological treatments for schizophrenia in the 1960s and 1970s reflected similar themes. An ad for the antipsychotic Haldol depicted angry black men with clenched fists in urban scenes with the headline: “Assaultive and belligerent?” At the same time, mainstream white media was describing schizophrenia as a condition of angry black masculinity or warning of crazed black schizophrenic killers on the loose. A category of paranoid schizophrenia for black males was created, while casting women, neurotics and other nonthreatening individuals into other expanded categories of mood disorders.

The black psyche was increasingly portrayed as unwell, immoral and inherently criminal. This helped justify the need for police brutality in the civil rights movement, Jim Crow laws, and mass incarceration in prisons and psychiatric hospitals, which at times was an exceedingly thin line. In general, attempts to rehabilitate took a back seat to structural attempts to control. Some state hospitals, presided over by white male superintendents, employed unlicensed doctors to administer massive amounts of electroshock and chemical “therapies,” and put patients to work in the fields. Deplorable conditions went unchallenged as late as 1969 in some states.

Deinstitutionalization, a government policy of closing state psychiatric hospitals and instead funding community mental health centers, began in 1955. Over the next four decades, most state hospitals were closed, discharging those with mental illness and permanently reducing the availability of long-term inpatient care facilities. Currently, there are more than three times as many people with serious mental illnesses in jails and prisons than in hospitals. The shifts in defining what constitutes mental health reflects the reality that the definition is shaped by social, political and, ultimately, institutional factors in addition to chemical or biological ones.

Looking at the historical and systemic context of the mental health system may provide insight into why racial disparities continue to exist and why these disparities have been resistant to interventions such as cultural competency training and standardized diagnostic tools. Focusing primarily on the race of the provider and the client, while valid, is an approach that does not consider the system itself, the functions of the diagnosis, and its structurally developed links to protest, resistance, racism and other associations that work against the therapeutic connection.

Racial concerns, including overt racism at times, were written into the mental health system in ways that are invisible to us now. Understanding the past enables new ways of addressing current implications and identified barriers, including how schizophrenia became a “black disease,” why prisons emerged where hospitals once stood, and how racial disparities continue to exist in the mental health system today.

Tahmi Perzichilli is a licensed professional clinical counselor and licensed alcohol and drug counselor working as a psychotherapist in private practice in Minneapolis. Contact her at tperzichilli@gmail.com.