Those of us who are professional counselors are perhaps most likely to recognize psychedelic drugs by their recreational or street names — acid, magic mushrooms, ecstasy — and to consider them to be drugs of abuse that may be dangerous to our clients. This is indeed the narrative that has been forwarded since the Controlled Substances Act (CSA) of 1970 classified all psychedelic drugs as Schedule I, indicating that they have a high potential for abuse, have no purposeful medical use and are highly dangerous.

It is sometimes surprising how public perceptions shift and how quickly knowledge can be forgotten. Prior to the CSA, psychedelics were of keen interest to many psychiatrists and psychologists. These professionals were curious about the ability of psychedelics to help patients with substance abuse and to elicit spiritual experiences. Dozens of research studies with thousands of patients were completed using LSD and psilocybin prior to 1970 with promising results, providing evidence in direct opposition to their Schedule I designation.

Considering these research studies, it is more likely that psychedelics’ scheduling status was related to their use outside of medical contexts, especially given their association with the counterculture and anti-war movements that the sociopolitical powers of that time perceived to be threatening. As the decades passed, public perceptions also changed and discussion of psychedelic research within academia became taboo, although researchers familiar with their potential retained interest. 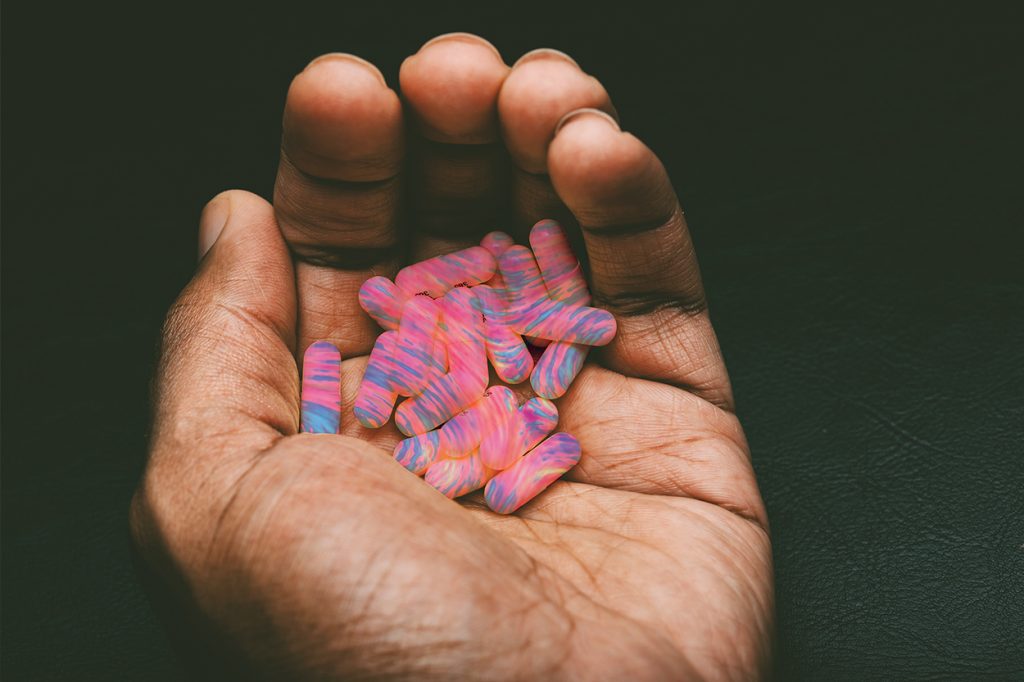 Potential and use in treatment

Eventually, psychedelic research began again in the early 2000s to investigate the safety and uses of psychedelic drugs in substance use and mental health treatment. Psychedelic drugs that are currently being researched or used as treatments include MDMA (also known as molly), LSD, psilocybin (the active compound in magic mushrooms), ibogaine (a compound found in the iboga root) and ayahuasca (a brew of numerous psychoactive plants containing DMT). Results have indicated promise for all of these drugs in the treatment of a wide range of disorders, including posttraumatic stress disorder (PTSD); end-of-life anxiety; social anxiety in adults with autism; depression; obsessive-compulsive disorder; and alcohol, opiate, nicotine and polysubstance use disorders. Psychedelic drugs are also being evaluated as treatments for Alzheimer’s disease and other neurodegenerative diseases due to their apparent neuroprotective factors and ability to enhance neuroplasticity. Outside of their use as treatments in clinical populations, psychedelics have been found to enhance self-acceptance, increase openness and improve social relationships. Their recreational use has even been correlated with reduced reincarceration and past-year suicidality.

Psychedelic-assisted counseling in treatment-oriented settings typically consists of a few preparation sessions with a pair of counselors (most often a male and a female). These sessions are more similar to traditional counseling sessions. During preparation sessions, rapport is built, skills are taught, and intentions and expectations for the psychedelic session are reviewed.

The counselor pair then support the client throughout the entire drug administration session, which lasts between six and eight hours. The client is provided with eyeshades, headphones and specially selected music by the counselors, who offer support through their presence and instruct the client to follow their own internal experience as the drug takes its course. These counselors later meet with the client for shorter integration sessions beginning the day after drug administration and then occurring weekly for a few weeks before treatment is complete.

Time and time again, research has demonstrated these drugs to be safe and viable treatment options that are worthy of significant attention from mental health practitioners. In fact, psychedelics’ potential as treatments for mental health and substance use disorders has led to two drugs, psilocybin and MDMA, being designated as “breakthrough” treatments by the Food and Drug Administration for treatment-resistant depression and PTSD, with full approval estimated to occur sometime during the next two years.

Implications and challenges for the profession

These research findings have been garnering public attention and have been featured in shows such as 60 Minutes and in the 2018 New York Times bestseller How to Change Your Mind by Michael Pollan. Pollan has since led a featured session discussing his book and the future of psychedelics at the American Psychological Association Convention in 2019. The counseling profession has been gravely silent on this topic, however, with no research utilizing psychedelics occurring within any university counseling program. Instead, psychedelic research is taking place primarily through the fields of psychiatry and pharmacology, despite the fact that counselors and other master’s-level mental health practitioners actually help prepare for, facilitate and integrate the psychedelic experience in treatment-oriented settings.

As research continues within these fields, psilocybin mushrooms have been decriminalized or legalized already to varying degrees in the California cities of Santa Cruz and Oakland, in the city of Denver and in the state of New Mexico. In addition, they may be integrated into the state mental health care infrastructure in Oregon through a 2020 ballot initiative (see voteyeson109.org). It is readily apparent that what has come to be known as the “psychedelic renaissance” is occurring at breakneck speeds without the counseling profession’s voice or values being heard and integrated. This poses challenges because the counseling profession is implicated and affected by these developments regardless of whether we choose to participate.

First and foremost, outcome-driven research has neglected to consider the characteristics and competencies of counselors who will administer psychedelic-assisted counseling. This poses serious risks for clients, given that harm is far more likely to occur from practitioners inappropriately using psychedelic-assisted counseling than from the drug itself, due to the extremely vulnerable states elicited while clients are under the influence.

Furthering this position is the fact that the use of certain psychedelics, such as ayahuasca and mescaline, is legal under the context of religious practices. Some individuals have capitalized on this reality by advertising these psychedelics as treatments or spiritual sacraments, leading to underground networks of neo-shamans or guides whose qualifications to treat mental health and substance use disorders may be questionable or nonexistent. For example, consider Steve Hupp’s Aya Quest retreat center, as seen on the VICE TV show Kentucky Ayahuasca, where Hupp uses ayahuasca to treat opiate use, eating disorders, depression and other issues.

As psilocybin, MDMA and other psychedelics gain wider approval, it will be necessary to develop competencies, regulations and a professional infrastructure to distinguish and delineate their use as treatments from their use as spiritual sacraments. As necessary as these steps may be, such a process is inherently difficult because of the apparent relationship between psychedelic use and spirituality. Participants in studies that use psychedelics have reported enhanced spirituality, morality and mindfulness. They often describe the experience as being profoundly influential in their lives and on par with other formative experiences such as witnessing the birth of their children.

Clearly, counselors involved with psychedelic-assisted counseling must be able to work with clients to process such intense experiences. This requires a distinct skill set and outlook that may be wildly different from our traditional toolbox of approaches such as cognitive behavior therapy or solution-focused brief therapy. Determining whether that skill set is best developed through having had personal experience using psychedelics will also pose a challenge, although many current and past researchers have suggested that experience is beneficial.

The role and historical stigma of ‘mystical’ experiences

In clinical research, the degree to which participants have a “full” mystical experience has been positively correlated with treatment outcomes. Mystical experiences often involve “nondual” states, in which people may experience a sense of unity between their outer and inner worlds and feel that they have experienced “the infinite” or “ultimate reality.” Individuals may believe their experience to have transcended time and space, and they may feel a deep sense of peace, ecstasy or awe. Perhaps the most unifying feature of mystical experiences is that language cannot adequately capture them; to describe the experience is to exert a form of “violence” upon it.

It is important to note that while psychedelics have been used in Indigenous cultures the world over for millennia to access such states of consciousness, similar experiences have also been prominently described in many major religions, including Christianity, Judaism, Islam, Hinduism, Taoism and Buddhism. Within these religions, such experiences are accessed through the development of spiritual practices, increased devotion or, at times, spontaneously.

Such dismissal of psychedelic-occasioned mystical experiences may stem from centuries-old stigma, which began when the conquistadors forced Indigenous practices using psilocybin mushrooms (known to the Mazatec people as “the flesh of God”) underground, considering the practice to be blasphemous to Christianity. After the conquistadors’ suppression of psilocybin mushroom use, psychedelics remained forgotten to Western culture until their rediscovery in the 1940s and 1950s, with the synthesis of LSD and publication of an article titled “Seeking the Magic Mushroom” in Life magazine. Psychedelics then enjoyed a brief spotlight in medicine and the counterculture before once again being suppressed by the authorities due to concern over their effects on society. Groups such as the Native American Church and Santo Daime, which used these plants for religious purposes, were subsequently forced to argue with the Supreme Court that prohibition of specific plants and drugs inhibited their religious freedom. These groups were granted exceptions to allow for their use in religious contexts.

Given the apparent relationship between psychedelics and spirituality, we must take stock of how we intend to use these tools and what skills are needed to do so. We must also critically consider who these tools are for or belong to. As a profession, we operate from a wellness model and have a duty to promote both client safety and social justice. Psychedelic-assisted counseling presents a tremendously complex issue with respect to these three aspects of our profession, given that psychedelics may be beneficial to nonclinical populations, are closely tied to certain religious practices that have historically been oppressed, and present a risk to client safety from both a medical and practical standpoint.

Analyzing each of these issues as they relate to psychedelics and the counseling profession must be done intentionally and preemptively to develop psychedelic-assisted counseling in a manner that is safe, ethical and just. Such an endeavor takes time, expertise, care and critical thought — which we have yet to begin. Regardless, psychedelics are returning to counseling in the very near future, and we must ask “Are we ready?” If we are not, the profession may be forced to react rather than plan and to follow rather than lead in the exciting but high-stakes “psychedelic renaissance.”

Benjamin Hearn is a doctoral student at the University of Cincinnati, where he is developing approaches for the counseling profession to use psychedelic-assisted therapies for mental health and substance use disorders. He is also interested in the integration of spirituality to counseling and is an active member of the Association for Spiritual, Ethical and Religious Values in Counseling. He has practiced in a variety of settings, including school-based mental health, private practice and wilderness therapy. Contact him at hearnbg@mail.uc.edu.