During the challenging era of COVID-19, many young people are experiencing the sort of isolation that can interfere with healthy social development. This may be particularly true for young people who were already wrestling with significant mental health challenges before the pandemic. Telehealth group therapy that utilizes role-playing games offers a hopeful modality for facilitating individual growth in a group context.

When one of us logs in to the Zoom session 10 minutes early, a picture of a cat immediately pops up. Martin has been waiting all morning for the group to start. He appears briefly and shows us his cat, Betty, sitting on his lap, before turning the video off so that only the photo of Betty is visible.

Gradually, everyone else joins and our game begins. Martin is committed to the group; he has never missed a session and is always early. In Dungeons and Dragons and other role-playing games, group members play fantastic adventurers, working together to overcome obstacles and gain rewards. The facilitator narrates a story, and the group members describe how their characters respond.

Martin plays an elf wizard named Sylvan who has a cat (also named Betty) as his magical animal companion. Martin was initially a bit shy but has integrated into the group and participates in collaborative decisions; he also loves to talk about Sylvan’s cat and backstory. Martin joined the group after the COVID-19 stay-at-home order in the spring of 2020, once we moved to a virtual environment. As is the case with some others in the group, this is Martin’s only social contact outside his family.

The therapeutic group allows for a structured social interaction — a place where people can connect, practice social skills, and modulate their inner and outer worlds. Many of the young people we work with experience social anxiety, depression or social skill deficits. The experience of a safe social setting where they can experiment with becoming someone else allows them to develop connections that can be both an antidote to loneliness and an opportunity for growth. 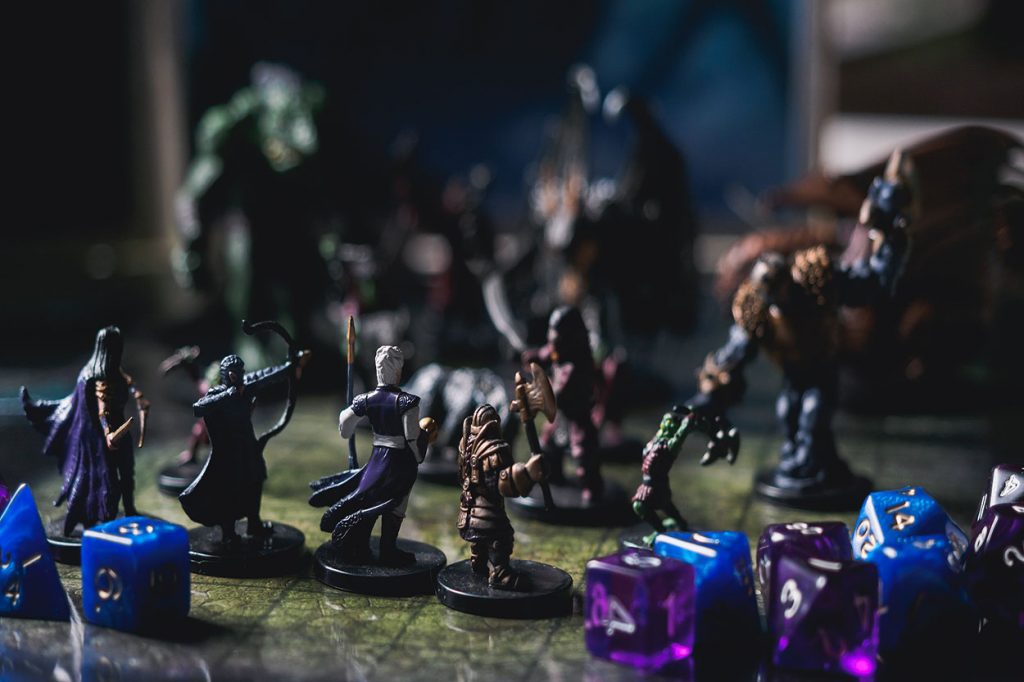 Role-playing games hold a place in the pop-culture imagination as a niche interest, but their popularity has increased in recent years, and therapists have started implementing the games more widely as a group therapy modality for older children and adolescents. In role-playing games, one facilitator describes an imaginary world, and the participants (playing characters) describe their actions in that world. Sometimes success and failure are based on dice rolls, but players’ creativity and collaboration are also key in helping a group achieve its goals within the world. The game has many decision points, and each player can change the course of the story.

Martin’s character, Sylvan, has blasted open treasure chests with fireballs, duped goblins by pretending to be their grandmother, and hatched a dragon egg. Martin’s creativity influenced the world for himself and the other players, creating a new set of circumstances and changing the direction of the story.

During the game, the facilitator sets the stage: “You enter the pirate’s cavern. As you go in, you see a couple of pirates standing guard.”

The group members discuss how they would like to respond. Should they fight the pirates or try to sneak past them?

“Let’s trick them,” Maya suggests enthusiastically. Maya is shy in real life, but in the game, she plays a tough brute who likes smashing down doors. Martin’s character is cunning and enjoys deception. He likes the idea, and they work together to come up with a ruse.

Martin’s character says, “We are poor pirates who have lost our way in the tunnels. Could you tell us the way to the ship?” He rolls the dice to see whether he can convince the pirate guards to let them pass.

Traditionally, role-playing games are played in person, sitting around a table with maps of the adventure setting, rolling dice, and telling the story together. However, it is possible to play the games remotely through videoconferencing and the use of online platforms. In recent years, remote role-playing game use has increased dramatically. The virtual medium confers new benefits during the COVID-19 pandemic and in an era of physical distancing. It translates surprisingly well to a telehealth group therapy experience. Martin, who struggles with social anxiety, told facilitators, “I like playing online better. I can turn off my video.”

We were particularly struck by the memory of Kendra, who had a very clear vision of how she wanted the game to proceed. She wanted to control the narrative so badly that she soon began frustrating the other players.

“Can I roll the dice to persuade Maya that she should give me her gold?” Kendra asked. She prioritized stealing gold or impressing pirates controlled by the game master over helping the other characters.

This led to frustration among the other group members. Some members began to go silent. One spoke out angrily against Kendra, suggesting the group members’ characters fight Kendra’s character. The frustration of the group turned into a discussion, and Kendra ended up changing her character’s behavior entirely, deciding that her character needed to work with the group and eventually save them, sacrificing herself for the greater good.

We asked the other group members what they valued about the game, and another member said, “Working together as a team.” The emotional message felt palpable. We were thrilled that the adolescent participants were able to lead this discussion themselves and process as a group with only minimal prompting from the adult facilitators.

Role-playing games involve the players describing the actions of their characters, while the game master describes the rest of the world and the people who inhabit it. The world is imaginary, and visual aids are optional. In a therapeutic group, this system allows for group members to explore identity construction and navigate group dynamics. Therapy groups for teens support the essential task of identity development in the context of relationships with peers and adults.

Much like with any good therapeutic group, what happens within the context of the game often reflects the members’ lives out-of-game. When the game master is also a therapist, questions such as “How are you similar or different from your character?” and “Why did your character make that decision?” make the game a clinical experience. The avatar of the character allows each group member a safe distance through which to explore, process, experiment, fail and succeed.

Group process as an adventure

Role-playing games have long been an effective group therapeutic modality, but creating a shared imaginary world presents unique opportunities during the COVID-19 pandemic, when we are unable to safely convene in person.

Every age has different developmental tasks to achieve, and during the pandemic, these tasks have either been interrupted or have required us to make notable changes in how we carry them out. With schools shifting the way education is delivered because of the pandemic, the amount of social interaction has been significantly reduced. On the whole, we are spending more time isolated from others, and young people are having fewer opportunities to develop socially. Role-playing games, a high-interest activity, allow for social experiences to happen through telehealth in a way that might currently be impossible in person.

Role-playing games feature goals, conflict, choices and relationships. Young people can do something together by completing tasks that require creativity and teamwork. Playing every week creates routine and ritual. Having a group means that young people have regular contact with adults and peers outside their immediate family.

Games can be adapted for different age groups and needs. Children and adolescents can develop executive function and practice resiliency. The technology necessary to play the game online can malfunction and lead to frustration, allowing participants to practice patience and engage in troubleshooting. Also, because the games are fun and silly and joyful, the fantasy setting can provide everyone with a much-needed break from the stress and grief of the current world (or a way to process grief and loss, because characters can die too).

This innovative form of group telecounseling provides an opportunity to engage young people who might not otherwise actively participate in a group process. It also provides an opportunity to support the cultivation of interpersonal relationships with group members in serious need of social skill development. Right now, during the pandemic, if we want to offer something that simulates living and striving in close proximity to others, we can. These challenging times call for innovation. Therapy can become exactly what kids need: a safe but exciting place to be challenged to grow. In other words, an adventure.

Related reading, from the CT archives: “The power of virtual group therapy during a time of quarantine”

Per Eisenman (peisenman@csac-vt.org) and Ally Bernstein (abernstein@csac-vt.org) are community mental health counselors in the Youth and Family Services Program at the Counseling Services of Addison County in Middlebury, Vermont. They have been leading therapeutic groups for teenagers using role-playing games since 2015 and 2018, respectively. At the beginning of the COVID-19 pandemic, they transitioned these groups to telehealth.