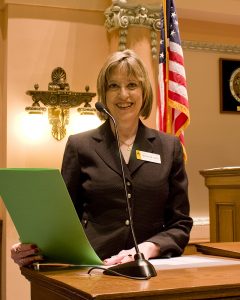 Counselors speak for the least, the lost and the lonely, says American Counseling Association member Bernadine Craft. That advocacy, she believes, should extend beyond office and classroom walls.

Craft has worn many professional “hats,” including former school counselor, licensed professional counselor, volunteer lobbyist, former Wyoming state legislator and ordained Episcopal priest, and she reflects on her innate passion for advocacy and the path to policymaking that started with her involvement in ACA governance.

A counselor takes the stage

Craft’s journey as an advocate began on the stage, so to speak. “I started out as a piano performance major, but I figured out that they didn’t eat so well,” she jokes. So, she switched her undergraduate major to speech and theatre with the intent of getting her teaching certification and continuing on to graduate school.

A chance conversation with the director of one of the plays Craft performed in set her on a course to become a counselor. Knowing that Craft had set her sights on a master’s degree, the director asked her what her area of study would be.

“I have no idea,” Craft told him. And he replied, “I think you should go into psychology. I think you’d make a hell of a counselor — you interact so well with people.”

Although psychology did intrigue her at the time, she wanted to work in a school setting. Craft’s director suggested she take a few classes to see if she liked it. The more Craft thought about it, the more the idea appealed to her. She loved talking — and listening — to people, so she took some psychology courses and ended up loving it. Craft went on to get her master’s in educational psychology and became a school counselor.

While working as a school counselor, Craft became active in ACA at the regional level as chair of the Western Region and president of the Wyoming Counseling Association, where she found her passion for advocacy in the push for counseling licensure. She also served on the Governing Council as president of the Association of Humanistic Counseling. Craft credits her training in speech and theatre as well as her experience on her high school debate team for giving her the confidence to campaign so passionately.

“I wasn’t afraid to speak in front of others,” she says.

Craft decided to continue her education by earning a doctorate in professional psychology. At first, she intended to become a counselor educator, but a severe illness kept her from pursing this career path. Instead, she maintained her private practice and started lobbying for educational issues as a volunteer. In 2004, Craft became the executive director of the Sweetwater Board of Cooperative Educational Services, an educational co-op created between Western Wyoming Community College and Sweetwater County School Districts 1 and 2 to provide educational services not otherwise available to community members.

In 2006, in a move Craft describes as “out of the blue,” a former schoolmate approached her about filling an upcoming vacancy in the Wyoming legislature.

“I responded almost exactly the way I would have responded if someone had said they wanted me to run down the street nude,” Craft says. Although she’d always been interested in current affairs and advocating for issues that she cared about, the thought of running for political office had never occurred to her. Craft’s friends and colleagues urged her to run because they saw something special in her. It took a long time for her to decide, but in the end, Craft realized that if she didn’t do it, she would spend the rest of her life wondering what it would have been like.

“I decided to be the voice of the voiceless,” she says. “Big lobby groups can make their voice heard because they have the money.”

Craft was particularly passionate about women’s rights and the protection of children and animals. During her time in the Wyoming House of Representatives (in 2006) and later as the only woman serving in the Wyoming Senate (from 2013 to 2017), Craft helped sponsor bills such as the 2011 Wyoming Safe Homes Act, which allows people who are experiencing sexual or intimate violence to break their leases without penalty. She also worked to protect survivors of intimate violence and helped make strangulation a felony in Wyoming.

Craft ran as a Democrat, but during her ten years as a legislator, she was able to hammer out agreements with her colleagues on both sides of the aisle. She believes that counselors are uniquely qualified to build consensus.

“Counselors are particularly good at listening [and] seeing both sides of issues,” she points out. They’re also good at going beyond binary thinking, or as Craft puts it, “not falling into the pit of black and white-ism.”

“I wish more counselors would consider elected office,” Craft says. People go into counseling because they care about people and want to make life better for them in whatever way they can, so she asks, “Who better to advocate for ‘the average citizen’ than counselors?”

There are other ways counselors can engage in political advocacy. Craft notes that everything she accomplished was through the help of an “army” of people who sent out emails, made phone calls, knocked on doors and coordinated mailings.

Legislators also need people to research, she says. Craft and a colleague who was a women’s studies professor worked together on legislation involving human trafficking, which is a broad and complex topic, she notes. The colleague’s aides were invaluable when it came to doing background research, Craft recalls.

“If you’re interested and really do want to be an advocate at some level, don’t let anything stop you,” she urges. “What can you do in your hometown? I think you can find a niche at whatever level you’re comfortable with, whether it be local, state or national.”

Craft notes that people often think that if they can’t make a big and splashy effort, they can’t do anything at all. But there are so many things counselors can do that will still move issues forward. Even two hours a week researching or contacting legislators can go a long way, she says. 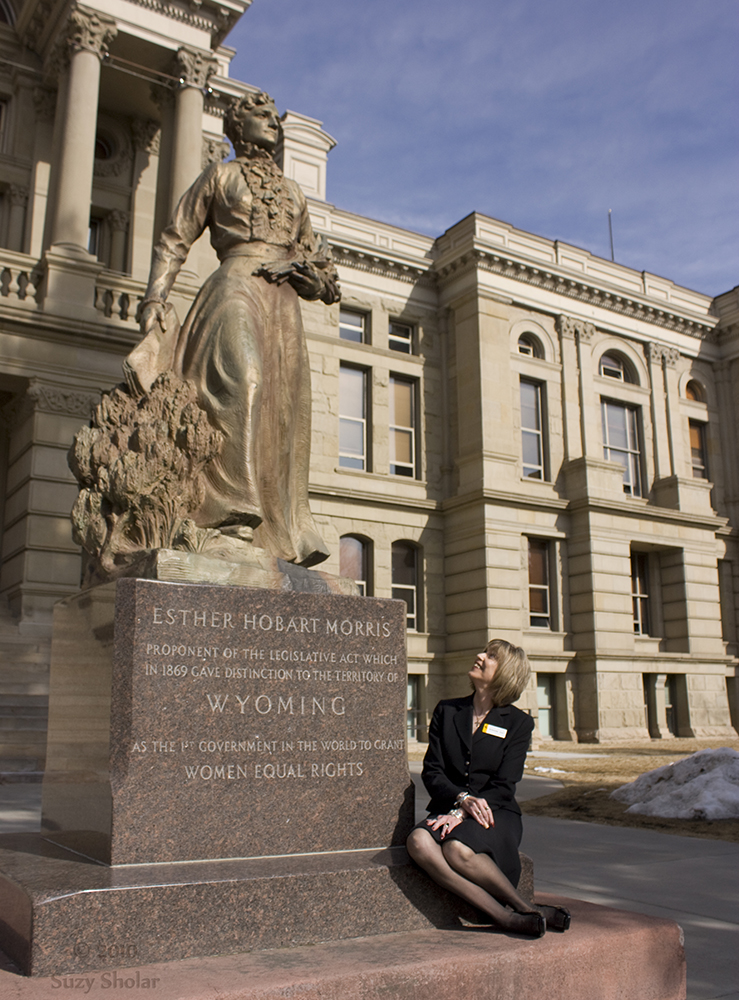 Craft is pictured at the Wyoming capitol building sitting at the feet of another pioneering Wyoming woman, Esther Hobart Morris, the first woman to hold judicial office in the modern world. Photo courtesy of Bernadine Craft.

On March 11, Bernadine Craft was a featured speaker for Mapping a Courageous Leadership Journey, a professional development webinar cosponsored by ACA and She Should Run.