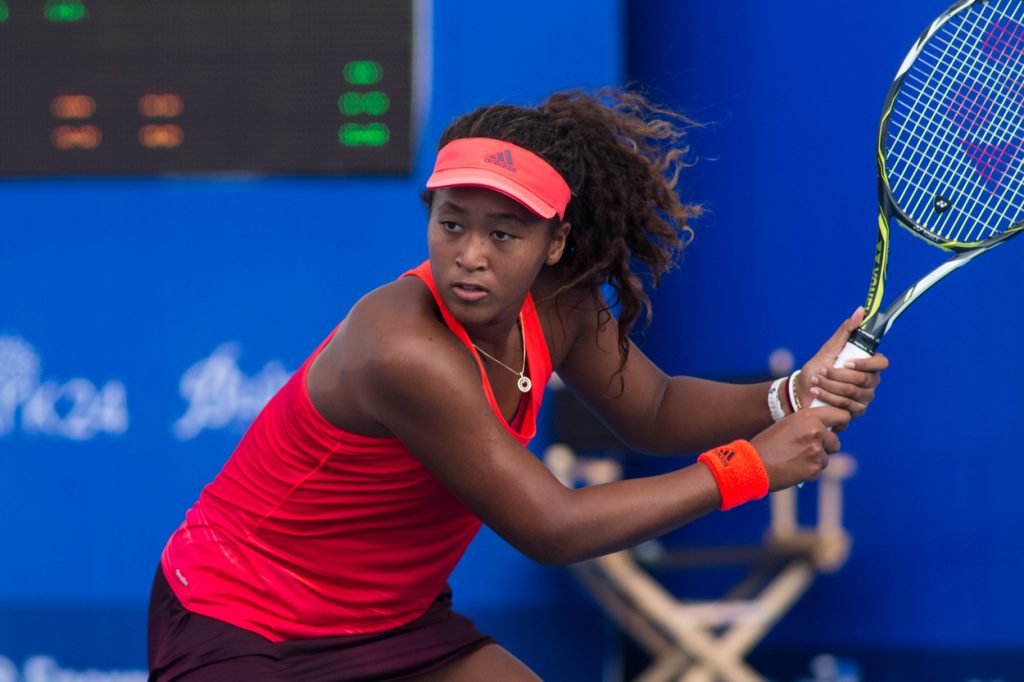 Tennis superstar Naomi Osaka joined the growing list of athletes who are putting their mental health first when she decided to withdraw from the French Open in May, a few days after being fined for refusing to participate in post-match news conferences with the media. She shared on social media that her decision was made to protect her mental well-being, noting that she has suffered with depression since 2018 and experiences anxiety over speaking with the media.

In a recent New York Times article, Alan Blinder says that Osaka’s decision to withdraw from the French Open was “a potent example of a movement among elite athletes to challenge the age-old notion that they are, and must be, as peerless in mind as they are in body, untroubled by the scourge of mental illness.”

Osaka also decided not to participate in Wimbledon and will instead focus on representing Japan at the Tokyo Olympics later this summer.

Athletes are often held up to unobtainable standards and viewed as superhuman because of their amazing physical talents, says Michele Kerulis, who is a licensed clinical professional counselor with a private practice in Illinois and holds a doctorate in counselor education and supervision. People expect them to be “perfect, excellent, exquisite and all those unbreakable things,” she explains. “But athletes are people who have the same spectrum of feelings that we all have. They feel anxiety, depression, guilt, shame, embarrassment, and so on, and … they are put under a microscope when they have any kind of a feeling that the media or the public doesn’t perceive as fitting within that sport.”

The stigma attached to depression, anxiety and other psychological conditions often prevents athletes from discussing their mental health needs out of fear they will be seen as weak. And for some college and professional athletes, there’s an added worry that their mental health may cost them their scholarship or contract, points out Kerulis, a professor of counseling at Northwestern University who specializes in sports, exercise and the impact of media on sport psychology.

This fear is not unfounded. Taunya M. Tinsley, a licensed professional counselor and owner of Transitions Counseling Services in Paoli, Pennsylvania, has heard coaches refer to players’ struggles with mental health in a critical or belittling way by making comments such as, “What’s wrong with you? Are you not on your medications?” This attitude further discourages athletes from being open about their mental health.

“Just because somebody has strong athletic skills does not mean they’re not going to suffer from mental health challenges, so [counselors] have to help put the humanistic aspect back in,” stresses Tinsley, a member of the American Counseling Association who specializes in sports counseling, multicultural and social justice issues, and spiritual and Christian interventions. Clinicians must help “athletes and those who work with athletes understand that … we can’t separate the mental and emotional wellness from the physical wellness.”

Athletes often ask Kerulis, an ACA member and an Association for Applied Sport Psychology fellow, to help them “get in the zone” a few days before a big game or event, and she lets them know that mental training takes time.

Coaches help athletes with the physical and strategic techniques, Kerulis notes, and trainers ensure athletes’ muscles are strong and prepared for the movement required in their sport. “The next piece is practicing those physical techniques [and] developing the muscle memory. When they are learning new skills or techniques, part of it is understanding they’re not going to ace this the first time they try it, and that’s part of what practice is — repetition and trying over and over,” she says. “And it’s the same thing with any psychological skills that athletes are learning. You integrate that into their practice setting.”

Like a strength trainer, Kerulis slowly works with clients using therapeutic approaches such as mindfulness, cognitive behavior therapy, imagery, relaxation and arousal control to help them improve their mental focus.

A basketball player, Kerulis explains, spends most of the game sprinting up and down the court, sweating and elevating their heart rate. But when the player gets fouled, they must quickly transition from this accelerated state to a calm one to successfully hit the free throw. That process requires mindfulness and body awareness, Kerulis notes. She might work with the basketball player for a few weeks to develop a progressive muscle relaxation (PMR) script (slowly tensing and relaxing muscles throughout the body) and help them learn how to scan their body and notice bodily sensations. Then, when they are at the free-throw line, they can do a quick body scan, release any tension and shoot.

“What you might see in a split second could takes weeks of preparation,” she points out.

It’s common for athletes to suffer from performance anxiety. Kerulis, the Association for Multicultural Counseling and Development (AMCD) Midwest Region representative and outgoing chair of the Midwest Region of ACA, once worked with a teenager who was a runner. Before every meet, he felt nauseated and dizzy, and no matter how he did, he felt distraught after it was over. He had already been medically cleared to participate and wanted help overcoming these physiological responses to his anxiety.

In session, they used the cognitive behavior therapy technique of thought stopping to help the client disrupt the negative thoughts he often had a few days before each meet and replace them with positive mantras or statements.

Kerulis’ client was scared to tell his coach about his anxiety because he thought the coach might not let him race. Kerulis asked if the coach had noticed his anxiety and the change in his behavior, and the client said, “Yes, absolutely.” So, they discussed how the coach was probably already wondering why the teenage runner was behaving differently.

This conversation helped the client realize that asking for help was a sign of strength, not weakness, and would show his desire to improve, Kerulis says. With her help, the client prepared talking points to lessen his anxiety around having that conversation with his coach.

The teenager also improved his communication with his parents by explaining that he wanted to have more positive thoughts going into his races. His parents were supportive and checked in with him before each meet, asking, “How are you feeling today? How’s your mantra?”

It’s important for counselors to assess where athletes are in terms of their identity development and tailor treatment plans to help them explore identities outside of their sport, says Tinsley, the clinical director of the Mount Ararat Baptist Church Counseling Center in Pittsburgh.

Some individuals may have a foreclosed identity and only see themselves as an athlete without exploring other aspects of their identity, she says. Then a career-ending injury or retirement will cause them to question their identity: Who am I without this sport?

Kerulis finds that if someone’s sole perspective of themselves is being an athlete, they tend to have a more detrimental response when something upsetting happens in the sport. Whereas an athlete with a foreclosed identity may feel extreme disappointment after losing a game, for example, another athlete who has a more open identity would not be as devastated because they have other interests in life and feel more balanced.

In other cases, athletes may have discovered additional interests outside of their sport, but their primary identity as an athlete prevents them from pursuing those interests, says Tinsley, a past president of AMCD. For example, an athlete might want to major in health sciences in college, but their sport schedule hinders them from taking the required classes or putting in the necessary work.

Tinsley begins her sessions by asking questions unrelated to the client’s sport so she can get to know the person, not the athlete. She may ask, “What are your interests when you aren’t playing the sport? Who do you have a good relationship with in your family?”

Kerulis also encourages athletes to maintain diverse interests unrelated to sports. “That’s not to decrease the importance of preparing mentally for [their] sport,” she says. “It’s to help create a more well-rounded individual so if and when they experience difficulties, tough times or roadblocks in their sport, they have this balance … and [can] reset.”

Counselors should focus on the prevention of mental health problems with the athlete population, Tinsley stresses. Part of that involves creating life-skills programs that help athletes plan for retirement before it happens so the transition is not a shocking, traumatic event.

Tinsley has worked with the National Football League (NFL) and the Pittsburgh Steelers to provide mental health services to athletes and to train former NFL players to serve as transition coaches between current athletes and mental health professionals. This work introduced her to LaMarr Woodley, a former linebacker for the Steelers who had already started thinking about his transition from the NFL by launching a Sack Attack Program in 2009. Through pledges, every sack Woodley made raised money for youth charities in Pittsburgh and his hometown of Saginaw, Michigan.

Woodley explains in a recent interview with Tinsley how despite some people’s insistence that he focus solely on football, he knew he needed to start preparing for life after his NFL career. He notes how parents and coaches are pushing kids to become professional athletes at younger ages, and this pressure can lead to burnout, stress, anxiety, substance use and other mental health concerns.

Counselors can help prepare athletes for these transitions, Tinsley says. She worked with Woodley to consider his next career options, and eventually, he decided to earn his master’s in sport management studies with a sports counseling concentration and continue to help athletes as they navigate the internal and external pressures that can affect their mental health.

In a Time magazine essay, Osaka stresses the importance of athletes (like other career professionals) being able to take mental health days without scrutiny or explanation, and she reminds us that “it’s OK not to be OK.” Going forward, perhaps more athletes will follow Osaka’s example of putting her well-being above her sport.

Kerulis applauds Osaka’s choice to prioritize her mental health. “It’s so hard for people to admit difficulties,” Kerulis says. “Some people are calling [her decision] a failure, but … it may be one of the biggest successes of an athlete’s career to be able to put themselves first and say, ‘I understand the importance of this competition, and at the same time I know that I need to take care of myself or else I cannot be the outstanding athlete that I know I am.’”