Amid talks of how African Americans have been disproportionately impacted by the COVID-19 pandemic and speculations about their hesitance to be vaccinated, the Tuskegee experiment has been cited numerous times as a kind of landmark explanation of why African Americans are reluctant to seek treatment. In the Tuskegee experiment, African American men were recruited for what they thought was a medical treatment but was actually a study of untreated syphilis that continued long after penicillin was a recognized intervention for the disease. In fact, the men were never treated, and many went on to infect their partners as well. As unethical as this research is now recognized to be, the reluctance of African Americans to trust systems and seek treatment is actually rooted closer to home, in the long history of mental health abuse and failed mental health intervention for African Americans.

Today, African Americans face numerous challenges that affect their mental health, including high rates of unemployment, poverty and incarceration; health disparities and disability; the emotional and psychological impact of the pandemic; and the steady uptick of police shootings in the African American community. All of these challenges are complicated by the intergenerational trauma of slavery, the very mention of which often arouses an almost visceral reaction even 150-plus years after it ended. In fact, Africans were brought to this country as slave labor and, along the way, laws were passed to ensure that they and their descendants would continue to be enslaved forever. Over time, the color of their skin was equated with servitude and privation in a way that has persisted for over 400 years. Slavery is our common history, and if it is a shame, it is our common shame.

Now there are new mental health challenges in the emerging myths that discount the history of African Americans and slavery. The first myth is that slavery is a hoax, meaning that Blacks were never enslaved in this country. The second myth is that Blacks were enslaved but slavery was really not that bad. In the first myth, the discounting of history is insidious. It is meant to befuddle and confound in the same kind of gaslighting experienced by the lead character in the movie of the same name (Gaslight). In this case, the myth is intended to create doubt of perception and historical memory such that Black people are being told, “You think you went through hell, but it did not happen.” In an era of turbulent racial tension, the second myth of slavery as a harmless social good conveys a tone of slavery reconsidered for African Americans, and recent voter restriction laws help to flesh out the second boogeyman as a political reality. This historical revisionism retraumatizes, angers and reactivates centuries-old intergenerational fight-or-flight strategies for coping, including confrontation (rallies and marches) and withdrawal.

According to the Centers for Disease Control and Prevention (2017), non-Hispanic Blacks are more likely than non-Hispanic whites to report feelings of “sadness, hopelessness, worthlessness, or that everything is an effort all or most of the time.” The U.S. Department of Health and Human Services (HHS) Office of Minority Health reported that suicide was the second-leading cause of death among African Americans ages 15 to 24 in 2019, and the death rate from suicide for African American men was four times that of African American women. African Americans have one of the highest rates of poverty in the United States, and according to the HHS Office of Minority Health, African Americans living below the poverty line are twice as likely as other individuals to report psychological distress. In 2019, the Substance Abuse and Mental Health Services Administration reported that among adults who experienced mental health issues in the past year, non-Hispanic Blacks were significantly less likely to receive mental health treatment than non-Hispanic whites (8.7% compared with 18.6%).

Despite the evident need for mental health counseling, many African Americans are reluctant to seek treatment. Some of this reluctance may be rooted in the reality that, historically, African Americans have had their mental health abused and their mental health treatment administered with a liberal dose of discrimination and bias. Initially, it was assumed that African Americans could not be mentally ill. The general notion was that a person had to own property and actively engage in business and civic affairs to experience mental illness, and because African American slaves “had nothing and nothing to worry about,” they could not be mentally ill. In fact, when both the 1840 and 1850 U.S. census found such low rates of mental illness among slaves, it was concluded that slavery actually protected slaves from the known diagnoses of the time.

Science rushed to support pro-slavery views. Physicians and scientists promoted the notion that slavery was such a good thing that a slave would have to be mentally ill to want to leave it. Thus, drapetomania emerged as the first race-based diagnosis. Samuel Cartwright, a physician, coined the term in 1851 to describe a “disease” that made slaves develop an irrational urge to run away from slavery. He also identified a second physical and mental abnormality, dysaethesia aethiopica, thought to attack Black people who had too much freedom. This condition was purported to make them sabotage their work, break things and become confrontational with others.

While early attempts to label African American behavior seem antiquated and almost laughable today, they have had a profound impact on the regulation of Black behavior and the transmission of intergenerational bias. Over time, resistance to oppression and free labor stereotyped African Americans as “lazy” people who did not want to work, and for their most vociferous resistance to slavery, they were often labeled “deranged.” In this way, race and control were conflated with mental illness in the lives of Black people, and that was just the beginning. Slavery in the United States ended in the mid-1860s, and the usefulness of Blacks for free labor and reproduction of more slaves ended with it. Slavery left a lot of broken families who were never able to reconnect. Employment was nearly nonexistent, and Jim Crow laws codified new subservient behaviors for Black people, who had to go to the back door for service and step off the sidewalk to let white people pass. From 1882-1968, 3,446 Black people were lynched in a campaign of terror, according to Tuskegee Institute.

Also in the late 1800s, Francis Galton coined the term “eugenics,” the notion that only certain people should be able to reproduce. Herbert Spencer supported this idea with his now famous “survival of the fittest” theory or social Darwinism. Eventually, the concept of eugenics was adopted and applied for various purposes: the genocide of the Jews by Adolf Hitler, in immigration policy and, ultimately, in the forced sterilization of people considered mentally defective, including persons with disabilities. According to the Equal Justice Initiative (2013), in addition to persons with disabilities and prisoners, “thousands of poor Southern Black women were sterilized without their knowledge or consent.”

The notions of Galton and Spencer further fueled views on miscegenation, or biological race mixing, and the legal prohibitions against intermarriage. The supposition was that by outlawing mixed-race unions, the white race would remain the strong, pure race, while mixed-race individuals, called “mulattoes,” would meld into the Black race. It worked. By definition, mulattoes disappeared nearly a century ago after the U.S. census dropped that category and mixed-race individuals were forced to self-identify as Black and intermarry with Black people. Legally, the prohibition on mixed-race marriage lasted until the Supreme Court struck it down in Loving v. Virginia in 1967. But in the dominant discourse, it has lasted much longer.

Well into the 20th century, the realities of Black mental health were minimized in service to age-old views on the dangers of Black people having too much freedom — namely, that it would cause them to lapse into ruin and insanity. Mental health treatment and facilities were fledgling and limited notions for everyone at the time, but for Black people, institutionalization was dismal. Because of segregation, Black people who were mentally ill were housed separately from whites, to the point of being lodged on the grounds or in overcrowded spaces, forced to work in the facilities, and often hired out to support the institutions.

In some cases, individuals were institutionalized for other disorders, other disabilities were mistaken for mental illness, and people were confined on the word of an employer. Despite passage of the Civil Rights Act of 1964, some states continued to provide discriminatory mental health services in which African Americans were more likely to be labeled as aggressive, less likely to engage in talk therapy, more likely to be segregated on pharmaceutical interventions and, in the case of African American men, more likely to be labeled as schizophrenic and restrained.

Consequently, many African Americans remain skeptical that mental health professionals are here to help them, and they are often right. According to a fact sheet published by the American Psychiatric Association in 2017, African Americans are less likely to receive “guide-line consistent” care, more likely to use the emergency room or a primary care provider for intervention, and less often included in research. In a 2013 study from Earlise Ward, Jacqueline Wiltshire, Michelle Detry and Roger Brown, African Americans were found to be generally reluctant to consider psychological problems, were concerned about the stigma associated with mental illness, and were “somewhat open” to mental health services, although they preferred “religious coping.” A 2015 study by Janeé Avent, Craig Cashwell and Shelly Brown-Jeffy found that in Southern Black communities, the faith leader or “preacher” is often a front-line source of support for church members experiencing mental health distress.

We could have an integrated discussion about the segregated history of mental health treatment in this country. We could stop saying that Black people “drop out” of treatment and start a conversation about why African Americans are skeptical of our labels and our notions and potions as they relate to the historical regulation of Black behavior. Finally, it is late — but not too late — to do due diligence in the clinical assessment of people who bought and sold human beings and, in many cases, perpetrated horrific acts of violence against them. The victims who resisted oppression were labeled “mentally ill,” but we have yet to label the perpetrators of these atrocities.

For these reasons, the myths that deny the injustices of slavery or that slavery ever even existed are not benign. African Americans have lived for more than 400 years in a kind of psychological fun house with mirrors that reflect everything in exaggerated shapes. The message: “Your life experience does not matter.”

Ultimately, viewing enslaved people as less than human, recklessly labeling them and then wantonly disregarding African American mental health for two centuries formed the justification for the Tuskegee experiment. So, if African Americans are reluctant to seek treatment, the reluctance has less to do with race and more to do with trust. That is what the reluctance is about. Happily, that is what counseling is about too. 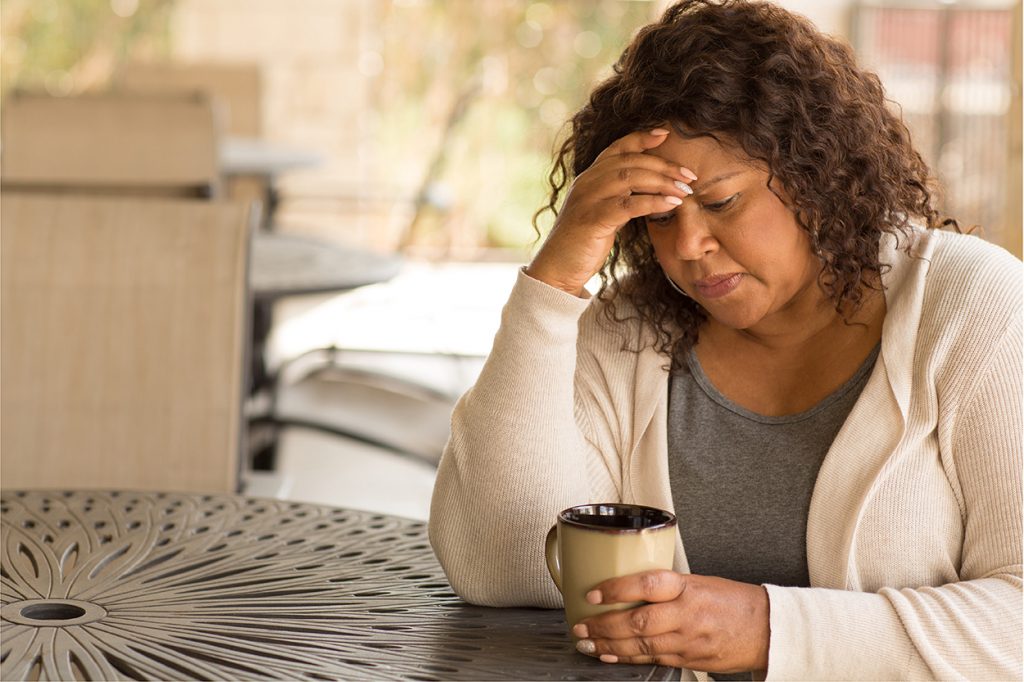