I grew up playing video games and have followed their technological evolution through the years. As such, video games have been a big part of my life and remain so to this day. These games are a source of entertainment and relaxation, and they can even provide opportunities for social interaction and connection. They can contribute to improving a person’s cognitive skills, creativity, communication and reflexes. Many people use them as a healthy coping mechanism to decompress.

On the flip side, there is growing concern about the potential of negative mental health consequences associated with playing video games. Some of these concerns include gaming addiction, negative coping mechanisms, unhealthy lifestyles, loneliness and isolation, depression and even suicidal ideation.

As someone who still plays video games, I have met an alarming number of individuals who struggle with these concerns. In many cases, these individuals have no support system or don’t know how (or when) to seek professional help. My concern is that many counseling professionals are unaware of the devastating impact that gaming can have on a person’s life — just as any form of addiction can.

The evolution of gaming

As a gamer myself, I have always been fascinated by what draws people to play games and how games can affect and influence individuals, from their thoughts to their worldviews to their social identity. It raises a question: How does playing a game give meaning to one’s life?

Playing a game is not simply playing a game. A lot is going on in the player’s mind as they are playing, which often presents a hidden meaning behind gaming interactions. As the world continues to develop and evolve around technology, video games will also continue to develop and evolve. Video game addiction has grown at alarming rates over the past few years, and this trend will likely continue. For this reason, concern is growing in the mental health community around video game addiction and the gaming population.

Video games have been around for decades, and as time has gone by, their popularity has increased exponentially, as has the size of the gaming community. As of 2020, it was estimated that more than 2 billion people around the world played video games. In the U.S. alone, 160 million Americans engage in online gaming daily, making the gaming industry worth over $90 billion.

Video games have developed into esports and are being more widely recognized as electronic but real sports. Both share many of the same principles of competition, including professional players, recognized teams and huge audiences of fans. Stadiums fill with fans as professional esports teams face off, competing for prizes in excess of $1 million. In 2017, more than 250 million online viewers watched popular online games such as League of Legends and Overwatch, generating $756 million in revenue that year (for more, see Internet Gaming Disorder: Theory, Assessment, Treatment and Prevention by Daniel L. King and Paul H. Delfabbro).

In addition, many video gamers make a living playing games by streaming to online platforms such as Twitch to thousands of viewers. As the video game industry has developed, it has gained popularity and will continue to do so.

As the popularity of video games has grown and the community of players has expanded, certain negative consequences and mental health impacts have become increasingly evident. In the fifth edition of the Diagnostic and Statistical Manual of Mental Disorders (DSM-5), internet gaming disorder was included in the section recommending conditions for further research. Gaming disorder was defined in the 11th revision of the International Classification of Diseases (ICD-11) as a “pattern of gaming behavior (digital-gaming or video-gaming) characterized by impaired control over gaming, increasing priority given to gaming over other activities to the extent that gaming takes precedence over other interests and daily activities, and continuation or escalation of gaming despite the occurrence of negative consequences.”

Internet gaming disorder was not classified as a unique mental disorder in the DSM-5 due to a lack of research in the field and debates regarding the recognition of behavioral addiction, but I believe recognition could help millions in need. At the same time, the opposing side argues that inclusion of internet gaming disorder in the DSM-5 would only generate unnecessary concern and lead to a stigma around such behavior.

Meanwhile, gambling disorder is recognized by the DSM-5 as a form of behavioral addiction, and it shares many similar characteristics with gaming disorder. So, I ask, why is this issue being ignored? Countries such as South Korea and China, where gaming addiction numbers are very high, have already recognized this as a serious disorder and developed treatment programs. 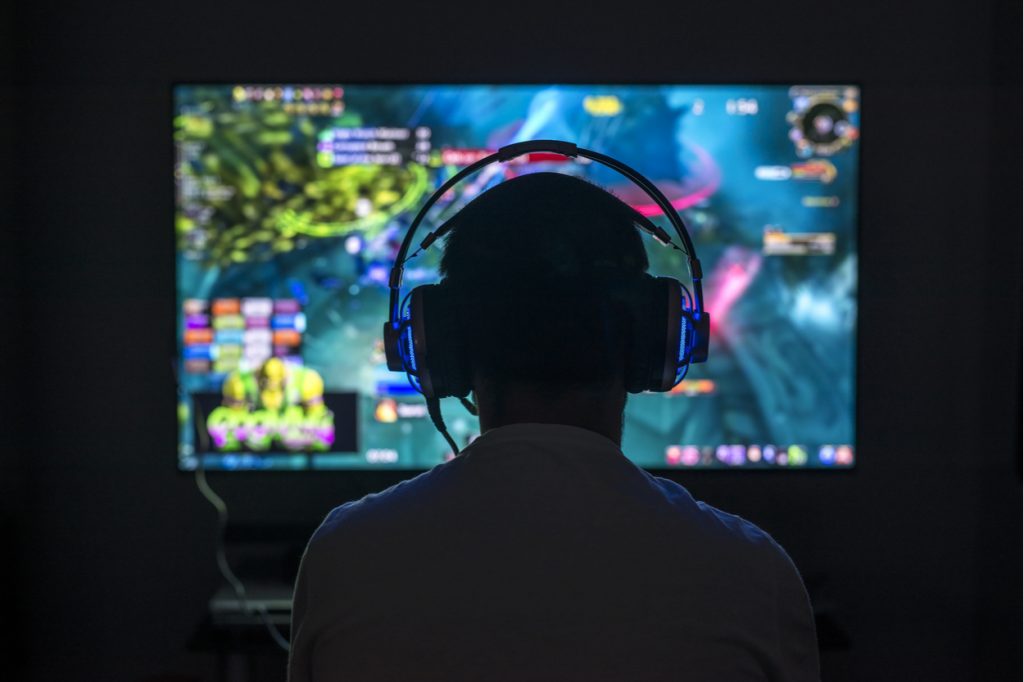 Factors that can lead to addiction

Video gaming is a fun activity for many people, in large part because of the positive reinforcement players receive for the split-second decisions they make while playing the games. From clicking a mouse button or controller to moving a character, from slaying the enemy to leveling up, games provide constant and instant feedback to their players.

Games also contain online environments where real-time players can connect with other players or join a guild. This gives players a social identity and can provide feelings of self-worth. Many players experience a sense of meaning in-game because they are constantly presented with objectives to achieve or obstacles to conquer.

In addition, massively multiplayer online role-playing games (MMORPGs) provide players with endless opportunities, scenarios and outcomes from quests, intense guild battles, endless levels and intense competition to be the strongest player on the server. But such games motivate players to spend long hours playing a game that has no ending, potentially leading to poor sleep habits, unhealthy diets, isolation from others and the real world, and addiction.

Perhaps the most important factor leading to video game addiction is the increased dopamine levels experienced during play. This is where the concern originates because it can lead to maladaptive behaviors, unhealthy coping mechanisms and, potentially, addiction. Given the constant feeling of reward for in-game decision-making and the often-endless levels or possible outcomes in a game environment, gaming can become addictive. It can end up serving as an alternate reality and an escape from real life because the game provides the player with a “better” version of it.

According to the DSM-5, the presence of five or more of the following symptoms over the period of 12 months characterizes such behavior as concerning and maladaptive. These nine symptoms include:

2) Withdrawal symptoms such as irritability, anxiety and sadness

3) Tolerance or the need to increase time in gaming

5) Loss of interest in other activities

6) Psychosocial problems due to excessive gaming

7) Deceiving family members, therapists or others on the amount of time spent gaming

8) Use of internet gaming to escape or relieve negative moods

9) Jeopardizing or losing a significant relationship, education, job or career opportunity because of online gaming

During stage three, biological addiction occurs due to constant and persistently high levels of dopamine release, leading to a state of dopamine exhaustion. When dopamine exhaustion is reached, not only do games lose their potential for fun and pleasure, but so do other areas and activities. At this stage, individuals often find themselves feeling apathetic, directionless and without meaning in life. We can compare this evolution to alcoholism, in which the effects of alcohol decrease over time, requiring more alcohol to achieve the same effect.

An effective way to reestablish normal functioning, regulate dopamine levels and improve quality of life is simply to take a break from gaming. During this period, which can take three weeks to two months, those who are addicted are encouraged to explore other activities and hobbies of interest as an alternative to gaming while dopamine levels reset.

What separates gaming from other addictions is that the addiction does not require quitting games forever. Instead, recovery focuses on learning to control time spent playing games. Strategies such as creating a schedule that incorporates healthy gaming habits into a routine while prioritizing other aspects of life have proved effective.

Much research is still needed about video game addiction to address the most efficient treatments and theoretical approaches for working with this population. When considering intervention strategies in counseling for gaming addictions, it is important to remember that no one-size-fits-all approach works. What works great for one individual may not work well for another. No single treatment has proved superior or most efficient yet. Cognitive behavior therapy has been the standard approach for many professionals, according to King and Delfabbro.

Professionals have also had positive results treating video gaming addiction with narrative therapy, especially with children and adolescents. As Alice Morgan writes in the book What Is Narrative Therapy? An Easy-to-Read Introduction, such therapy is effective because it “views problems as separate from people and assumes people have many skills, competencies, beliefs, values, commitments, and abilities that will assist them in reducing the influence of problems in their lives.” Narrative therapy might address strengths involving achievements in a game, such as being among the top players or leading the team to victory. It further explores these strengths and skills by incorporating them into real-life scenarios. It is equally important to assess the level of addiction as mild, moderate or severe by analyzing the severity of symptoms and the negative impact of gaming behavior.

It is important to establish trust and rapport during initial sessions. One effective way of developing rapport and trust with such clients, especially those who are resistant, is to mindfully disclose any experience the counselor has with video games. The counselor and client can find common ground through such shared interests and experiences. In contrast with substance abuse and alcohol addiction, the ultimate goal with gaming addiction is often not to eliminate gaming once and for all but rather to effectively control and reduce time spent playing video games. The goal is to normalize behavior that does not negatively interfere and affect other areas of life and overall physical and mental health.

As we rapidly move into technological and online environments in many aspects of our daily lives, video games will continue developing exponentially, and gaming communities’ growth will follow. Mental health issues are also rising among this growing body of diverse gamers. Using games as a coping strategy for other underlying issues can lead to an addiction, as real life is replaced with a virtual and more favorable one. Research in this area will continue to develop, and so will the emphasis placed on this issue and population by mental health professionals. More awareness of internet gaming disorder and the struggles faced by this population is needed to promote mental health and well-being.

Doyle L. Raymer Jr. is a mental health counseling student at Walden University. As a gamer himself, he has a deep interest in internet gaming addiction. It is his deep desire to advocate and create awareness to help improve the overall mental health of members of the gaming community. Contact him at doyle.raymer@waldenu.edu.