“When will this go away?” my client asked me.

So many times, I’ve seen the same desperate look in the eyes of clients. With this 45-year-old man, the look was caused by grief at the sudden loss of his closest friend — his father. Every morning after a restless night, he woke only to be greeted by the ever-present hole in his heart created by his loss.

“This kind of pain doesn’t go away,” I said softly. “It fades, but unfortunately, it will always be there.”

And then I shared a metaphor with him that I’ve used a thousand times.

“But instead of wishing that the dog would go away, we can confront our fear of the mean dog. If we pretend that it isn’t there, it very likely might hurt us if we carelessly stray too close to the property line. But if we are aware of the mean dog and the length of its chain, then it can never hurt us no matter how much it growls or how loud it barks.”

This metaphor works for addictions — the mean dog is the lust for chemicals. Pretending the mean dog isn’t there (or hoping it has gone away) can trick the person to stray too close to the party with alcohol or the reception where former methamphetamine acquaintances are likely to be congregating.

The metaphor works for trauma — the mean dog is the event or the perpetrator. Pretending “I’m OK” can allow the mean dog to slip closer and closer, maybe over years, as the client represses fear, hurt and pain. Then, one day without warning, the mean dog can bite.

The metaphor works for sexual addictions. So many men and women have been drawn into this secretive and shame-laden world under the illusion that “I’ve got this under control.” In the privacy of their homes, they swim in their addictions, sometimes straying too close to the property line. The dog bites in the form of spouses or children who catch them or in the form of illegal activities that land them in jail, forever branded as sexual offenders.

Recognizing the mean dog isn’t novel. The idea has been around in other forms for many years. Alcoholics Anonymous got us started in 1935 with the concept of 12-step programs. The very first step is admitting your powerlessness over the addiction. By admitting one’s powerlessness, in a sense one is admitting that the mean dog will be around for a while — probably forever. I just added the metaphor.

One last truth about the mean dog: It will never be our friend, but we can co-exist with it. So, in addition to the above, we can vocalize, “Even though I know the dangers of the mean dog, I won’t allow it to cause me to live in fear, shame or pain. I am well aware of my limits and the things that compromise my safety.”

Whether used with a 7-year-old child who has been sexually abused, a 40-year-old man struggling with grief or a middle-aged woman challenged with addictions, this metaphor has been a regular and helpful tool for me.

And one last way to utilize this metaphor: Sometimes we can move away. When we hold on to our resentments and anger and we wallow in our hurts, we are electing to live next to the mean dog when we don’t have to. In such cases, maybe it is within our power to find a quieter place to live.

As for me personally, as may also be true for you, I know the mean dogs in my history, and I practice this myself. I have moved away from the mean dog a few times, but there are other mean dogs that will always be with me. As much as I’d love for the guy with the mean dog to move, I know that in some cases, we are neighbors forever. But as time moves on, the hedges grow taller and the barking gets quieter.

That, my friends, makes for much more peaceful nights and restful days. 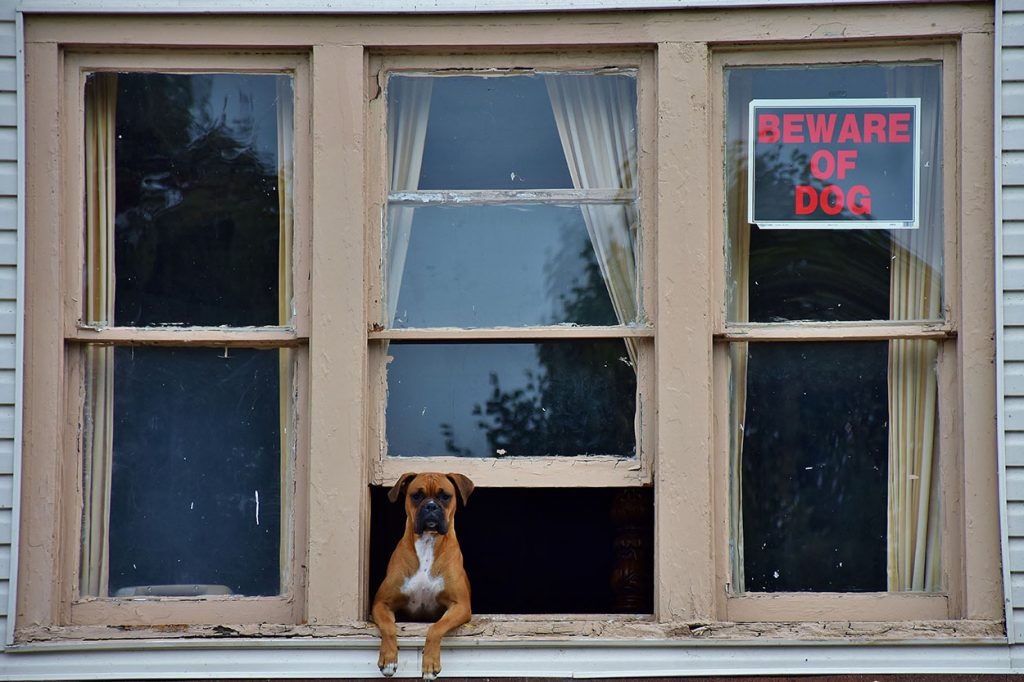