It is estimated that around 70% of the global population has been exposed to a traumatic event at some point during their lifetime. This is a staggering approximation when we consider that beginning counselors are often woefully unprepared to support clients from a trauma-informed perspective. Although the annual rates of diagnosable posttraumatic stress disorder (PTSD) are comparably low, symptoms such as hyperarousal, a frequently negative emotional state, and negative mood alterations can be far more common than clinicians may recognize when initially assessing clients.

A significant number of my very first clients were survivors of trauma or clients who had moderate to severe symptom presentations, which is not uncommon for a community mental health agency. As I waded my way through the tide of intakes and assessments and diagnoses as a green counselor, I naturally defaulted to a top-down approach to treatment. I confidently stepped into the field thinking that if I focused on coping skills, faulty thinking patterns and behavior modification, then I would help clients get to a place where they could choose to embrace a new way of living.

This was occasionally reinforced, but for maybe about 10% of my caseload. Regularly, clients would say that the skills didn’t work. They couldn’t find the words to journal or untwist their thoughts. Going on a walk only made them think about their distress more. Squeezing a stress ball when they were angry was fine, but it didn’t really do much to change their emotional state. In some cases, they couldn’t even remember that the skills existed until far after their distress had passed.

What I began to see was that most clients had significant difficulty getting to a place where their logical brain could be accessed. Clearly, there was something else going on. The more I explored different approaches for answers as to why these skills weren’t working, the more I realized that this top-down approach wasn’t meeting my clients where they had control.

Ignoring the body experience and the nervous system were almost certainly the barriers I had inadvertently fortified for these initial clients. What if regulating the nervous system could help clients quickly regain control and resolve distress? The possibilities were endless.

When stressors occur and danger is sensed, the body automatically moves from the rest-and-digest state into the fight-or-flight response of the SNS. Once the threat passes, the PNS will reengage, but it can be helped along by distraction and self-soothing, such as grounding or sensory techniques.

Grounding techniques include activities such as:

Considering that approximately 70% of the global population has experienced a traumatic event during their lifetime, difficulty regulating the nervous system would appear to be more common than we may have realized. Furthermore, what do we do when the typical grounding techniques fall short of said regulation?

Stephen Porges, the researcher who posited polyvagal theory, suggested that the vagus cranial nerve plays a significant role in how information is communicated to the systems of the ANS. Rather than having two systems, Porges indicated that the ANS actually involves a three-system hierarchy that divides the PNS into two branches: the ventral vagus complex responsible for sensing safety and social connectedness, and the dorsal vagus complex responsible for sensing danger.

Activation of the PNS typically results in decreased heart rate, increase in digestive function, decreased muscle tension, regulated body temperature and regulated rate of respiration. However, perception of extreme danger may further immobilize an individual beyond the rest-and-digest response to experience what is known as the freeze-or-collapse response.

Peter Levine conceptualized in his book Waking the Tiger: Healing Trauma that individuals who do not perceive having access to safety during hyperarousal will shut down, their SNS seemingly suspended in time as the dorsal branch of the PNS takes over. Levine indicated that individuals could wake from this freeze response by bringing mindful awareness to the bodily experience, thus bridging compartmentalized aspects of previous trauma stored in the body. This would allow individuals to detach from trauma reminders and move that suspended energy from one system to another.

The 1960s work of A. Jean Ayres with sensory processing issues theorized that such impairment would result in various functional problems. This theory was expanded by later researchers and referred to as sensory integration theory. Sensory integration theory refers to the processes of the brain that regulate the impact of sensory experiences on motor, behavior, emotion and attention responses. The research of Stacey Reynolds and colleagues published in The American Journal of Occupational Therapy in 2015 postulated that delivering alerting or calming sensations to an individual could change the function of the ANS. They hypothesized that sensations that were alerting would increase SNS activity, whereas activities that were considered calming would activate the PNS.

Although these theories have largely been applied to sensory disorders and trauma responses, it is reasonable to believe that even for individuals experiencing chronic stress or intense symptoms of anxiety and depression, engagement in sensations recognized as alerting would serve to arouse the SNS and decrease the activity of the dorsal vagus complex of the PNS, effectively rousing the individual from immobility or dissociation. Once the stressor passed and the individual recognized that they did have access to safety, they would have the ability to move from SNS activation to the social engagement state of the PNS.

By incorporating the ideas of polyvagal theory and sensory integration theory, we can surmise that the use of intense sensory experiences could wake an individual from immobility and reset the suspension of energy being held by the ANS.

The old frozen orange trick is an excellent example of this sensory distraction skill in action. The idea is that the cold temperature of the orange will cause an immediate distraction, thus slowing down the release of cortisol and adrenaline and releasing endorphins that help the body cope with the sensation of pain. Unfortunately, most of us don’t have access to a frozen orange in the middle of a stressful meeting, at the courthouse or while driving on the highway, which happened to be some of the exact moments when clients I was working with mentioned needing such an intervention.

In search of an accessible way to actively distract clients from the overwhelming physiological and emotional shutdown, I considered how sensory tools might look if they were portable. After all, having immediate and reliable access to these alerting sensory tools when the PNS dorsal vagus complex response is engaged is key to habituating the idea that we can be in control of regulating our own ANS. 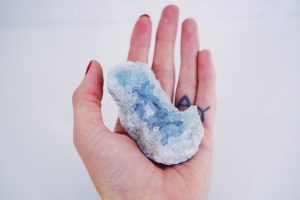 I started making small to-go bags for my clients to take with them, which I now refer to as a trigger kit. The bags contained sour candy, a raw crystal that was jagged to the touch, and a sample of peppermint essential oil.

You might be wondering why those things? Although we do have five external senses (i.e., sight, smell, taste, touch, hear), building a kit that effectively arouses the SNS involves selecting accessible tools that quickly and powerfully activate taste, touch and smell. Intensely distracting sounds or sights are likely to intensify dysregulation and are not advised, but of course, the kit is completely customizable. Whatever works for the client, works for the client!

I introduced the kit by providing psychoeducation about the ANS. I would have clients experiment with the sensations during session so they could have a reasonable expectation of what they were trying to replicate on their own. Maintaining a small sensory kit that can be easily transferred between locations — in a purse, in a jacket pocket or in a backpack — allows for immediate access as needed. I initially used small sandwich bags but have since moved on to small drawstring bags that can both conceal and contain the items. My clients have consistently cited the trigger kit as one of the most effective grounding tools they have attempted to use in the midst of distress.

To move from the PNS freeze-or-collapse response to the SNS response and back to the PNS social engagement process, including recovery items in the trigger kit similar to those intended for grounding tend to ease the intensity of the transition. Clients frequently include items in their trigger kit such as pictures of loved ones, spiritual and religious tokens, and soothing sensory items such as bubbles or soft fabric to be utilized after the SNS has been reengaged.

Grounding techniques are commonly used to create a mindful awareness of the present moment and can be quite effective for bringing the client back to their body. However, when clients experience intense dysregulation, it is likely that typical grounding techniques will not be enough to pull an individual from hyperarousal or immobility. A more intense grounding experience, such as a powerful, portable sensory experience, may be useful. Empowering individuals with psychoeducation surrounding the functions of the ANS and the use of a trigger kit can assist clients who might benefit from regulating from the bottom-up.

Samantha A. Hindman is a licensed mental health counselor, national certified counselor and certified clinical mental health counselor. She is an educator for the Community Care program for AdventHealth in the central Florida region. She has experience working as a trauma therapist for a community domestic and sexual violence agency and is a therapist in private practice. Samantha has taught mental health courses at the graduate level and enjoys providing in-person and virtual trainings on research methodology, program evaluation, basic and advanced counseling skills, neurobiology, and therapeutic considerations for working with survivors of trauma. She is currently in the dissertation phase of her Ph.D. journey in a counselor education and supervision program. Contact her through her LinkedIn page at linkedin.com/in/samanthahindman.