Rwenshaun Miller spoke about the importance of culture and introspection during the closing keynote for the American Counseling Association’s 2022 Virtual Conference Experience. He told the audience that he has been impactful as a counseling professional because he uses his life experience as a Black man with a mental illness to guide the way he serves his clients and the way he cares for his own well-being.

“I learned how to not only to become [an] effective and efficient therapist but also someone that understands the importance of mental wellness, especially for individuals who look like me,” said Miller, a licensed clinical mental health counselor and supervisor and motivational speaker. 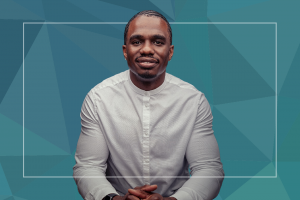 He said he has been successful as a clinician “because of the fact that I did my own work and continue to do my own work.”

Miller is the co-founder and chief executive officer of the Good Stress Company, a group practice in Charlotte, North Carolina, and the author of Injured Reserve: A Black Man’s Playbook to Handle Being Sidelined by Mental Illness. He has been widely recognized for his work in empowering people with mental illnesses to live their best lives, and he is a recipient of the American Psychiatric Association Foundation Award for Advancing Minority Mental Health, the SXSW Community Service Award, and Omega Psi Phi’s Brother Paul Woods Bridge Builder Award.

Miller shared his journey with mental illness and explained to the audience how culture has influenced his experience as a client and as a counselor. He said his mental health problems began when he was a sophomore at the University of North Carolina at Chapel Hill (UNC-Chapel Hill). Miller was a top student and athlete in high school, but he struggled in college to maintain an academic scholarship and excel on the university’s football and track teams.

“These particular pressures were a struggle for me,” Miller said, noting that he was having difficulty making the transition from his small, majority Black high school to a large, predominately white institution. UNC-Chapel Hill was an unfamiliar place where he encountered the belief that he was only admitted to the university because he played sports. When Miller was placed on academic probation and suffered a knee injury, he said “things started to slide” for him.

He stopped attending classes and remained in his dorm room. He couldn’t sleep, lost his appetite and rarely showered. He also began to hear voices.

“This was something that terrified me, but I was afraid to even talk about those things that were happening to me,” Miller said, adding that his ego and pride kept him from asking for help. “I was used to doing it on my own for so long.”

When Miller’s family finally learned he was in distress, they admitted him to a psychiatric hospital, but he fought and resisted being admitted and the medical professionals placed him in a straitjacket.

My family was “worried about my own mental well-being,” Miller said. “And also they didn’t know what else to do for me.”

“I was actually terrified about going to into the hospital because where I grew up, a lot of times when we heard about people going to the psychiatric ward, we just called them crazy,” he said. “Honestly, that’s not something you want to be considered.”

Miller was afraid to talk to the hospital’s clinicians. “I was terrified to even talk to anybody. Nobody in there looked like me,” he said. “That lack of representation kept me in my shell.”

Miller explained that in the Black community, medical professionals “who didn’t look like us” were not trusted. “History shows you that we were treated as subjects” he said, noting the infamous Tuskegee Syphilis Study. So Miller remained silent until he realized “if I don’t talk, I don’t get out.”

Eventually he was diagnosed with bipolar I disorder with psychotic features and was told that he could not return to the university because it was a stressor for him. Instead, Miller was advised to start therapy and take medication to treat his mental illness.

“When I walked into his office, he looked like me, he talked like me,” Miller said. “He created a space for me to be able to open up to him and tell him the different things I had going on.”

When Miller’s condition began to improve, he said he was convinced that he was cured and didn’t need to continue with his medication or therapy. Instead, he wanted to get back to UNC-Chapel Hill. However, when Miller returned to the university, his symptoms reappeared, and rather than reach out to his mental health providers, he began to self-medicate with alcohol, a dependence that lasted three years.

“I was mentally deteriorating,” Miller admitted. During this time, Miller said his life hit the lowest of the lows, and he attempted suicide three times.

“You get so caught up in wanting to stop the emotional pain, and you have voices in your head that are telling you ‘You shouldn’t be here,’” Miller said.

But through the adversity, Miller realized he had to take ownership of his mental illness and be intentional about his recovery. “Not only for me, but for the people who are in my life,” he explained. So he went back to therapy and started taking his medication.

Miller said experiencing the lowest time in his life gave him perspective into what mental health disorders and treatment can be like for people of color.

“I started to just notice gaps,” Miller noted. “Not only in the health care system but in society.”

Miller said although he was fortunate to find a Black male therapist, there aren’t enough Black clinicians in the mental health field. And Miller decided to help fill this gap by becoming a therapist.

As a Black man, Miller said he was socialized to be strong, to be a provider and not to show any emotions other than anger or happiness. He internalized this message, and when life got hard, he didn’t have the words to express his feelings, so he kept them bottled up inside.

Miller founded and currently serves as the executive director for Eustress Inc., a nonprofit organization that focuses on raising mental health awareness to break the stigma associated with mental illness in communities of color. His work with this organization allows him to help other Black men and boys.

“I put culture to the forefront of how I deliver services,” Miller said, explaining the importance of “meeting people where they are” and recognizing that therapy “looks different to every single person.”

Miller challenged his peers to think about how culture affects counseling and to tend to their own psychological wounds so they can help others heal.

He also reminded the audience that “there’s a very thin line between illness and wellness. And if you’re not taking care of yourself as a helper, and as someone who serves, how effective can you really be to anyone else?”

Registration will remain open until Dec. 31, and attendees will have access to the conference sessions and other content through Jan. 9, 2023.

Find out more at counseling.org/conference/vce-conference-2022

Lisa R. Rhodes is a senior writer for Counseling Today. Contact her at lrhodes@counseling.org.