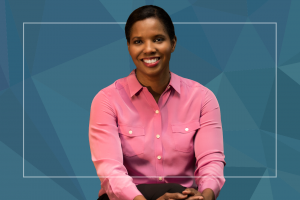 Briana Scurry, two-time Olympic gold medalist and the first Black woman to be inducted in the National Soccer Hall of Fame, regaled attendees of the American Counseling Association’s 2022 Virtual Conference Experience with her journey to becoming one of the most renown female soccer players in the country. During the introductory keynote, she discussed how “intentional effort” is the key to success.

“I think the lessons I learned [in soccer] are life lessons and are lessons that are able to help anyone and everyone that hears them to do and be successful at whatever it is they choose,” she said.

Scurry also acknowledged that there is no easy or quick way to succeed; it takes time, perseverance and intentional effort. No matter what it is you want to do, she stressed, you need to be willing to put in the work. And it helps to have a clear goal, she added.

After watching the U.S. ice hockey team compete and win against the Soviet Union during the 1980 Winter Olympics, Scurry, who was eight at the time, decided on her goal: She would be an Olympian. And as a teenager, she redefined that goal by deciding that she would compete in the 1996 Summer Olympics.

In middle and high school, she played several different sports, including basketball, soccer and track, but she was not sure which sport would lead her to the Olympics until the University of Massachusetts offered her a full scholarship to be the goalkeeper for the women’s soccer team.

“I knew this was a wonderful opportunity for me. And I was going to make the most of it,” Scurry said.

Throughout college, she continued to work hard and push herself to get better, which she learned is more valuable than winning. After her team lost the NCAA Women’s Soccer Championship during her senior year, Scurry was invited to train at the United States Women’s National Soccer Team’s training camp alongside all-stars such as Mia Hamm.

At first, Scurry didn’t understand why she had been invited. After all, her team lost. But her coach explained to her that the results of one game didn’t matter; it was everything else that she had done up until that point.

“All the things that I could control — my work rate, my attitude, my determination, my resilience — that’s what mattered,” she said.

These same ideas, she told the audience, apply to other careers and goals, including counseling. “It’s about effort, intention,” she noted. “The way you carry yourself, the way you bring yourself every day to whatever you’re doing. And all these other things have to work for your favor, for your good, but you don’t have control over all that stuff. You have control over you and how you show up.”

She advised the audience to focus on the things they can control and work to keep getting better, and then everything else will fall into place. That’s exactly what Scurry did. She kept training, kept bringing her best self to every practice and kept focusing on her goal of becoming an Olympic medalist until she eventually made the United States Women’s National Soccer Team in 1994.

Two years later, her dream was realized when she found herself competing in the first Olympic women’s soccer competition in 1996. She played the entire game, and her team won gold.

She acknowledged that other factors such as a supportive family and competitive environments also played a role in her success.

“Uber, ultra-competitive environments … are the environments that shape diamonds,” Scurry explained. “Competition is a good thing. That’s how we hone skill. That’s how you sharpen your skills on the cutting edge. That’s what I did.”

But Scurry did warn against becoming complacent in successes — something she learned firsthand. After winning the Rose Bowl in 1999, she admitted she let success get to her head. She had become a celebrity and was more into her image than becoming a better athlete. And this shift in focus caused her to lose her spot on the team during the 2000 Summer Olympics.

“I lost my spot because I took my eye off the ball,” she recalled. She was angry at everyone — except herself — until she looked at a photo and realized that she was no longer in competitive shape.

“I understood in an instant why [my] coach had replaced me,” she said.

Scurry said she had to work even harder to get back to in shape and become the “best Briana Scurry” she could be.

“I got to the mountaintop, and I didn’t understand that in order to stay there, you have to be better than you were on the way up,” she said. And her hard work paid off because she did make it back to the mountaintop and competed in the 2004 Summer Olympics, where her team won gold again.

She retired from the United States Women’s National Soccer Team in 2008, but she continued competing professionally until she suffered a concussion during a game in 2010 when one of the opponent’s knees crashed into her head. This collision not only ended her professional soccer career but also left her with a traumatic brain injury. For the next three years, she struggled with memory and cognitive issues.

“I couldn’t remember where I parked my car [or] where my keys were,” she said.

Her mental health also took a downward spiral: She had terrible headaches and began suffering from depression and anxiety. And in 2013, she said she started having suicidal thoughts.

“I felt like I was a burden, so I didn’t reach out for the help from my friends and family [and] my teammates that I needed because I was ashamed,” she said. In addition, her finances were in trouble to the point she was forced to pawn her Olympic gold medals for money.

But luckily, one of her friends realized Scurry needed help and connected Scurry with someone who could help her find the medical treatment and therapy she needed.

Scurry turned this situation into something positive. Today she shares her experience with others around the country and advocates for concussion and traumatic brain injury awareness.

Scurry told the audience that they all had the potential to succeed, but first, they had to believe in themselves and then put in the maximum amount of effort into whatever they’re doing.

She reminded counselors that their dreams are just as important and relevant as hers. “You’re helping people weave through some of the most difficult events of their lives,” she said, “In my opinion? That sounds like it’s more important to me” than soccer.

Registration will remain open until Dec. 31, and attendees will have access to the conference sessions and other content through Jan. 9, 2023.

Find out more at counseling.org/conference/vce-conference-2022

Samantha Cooper is a staff writer for Counseling Today. Contact her at scooper@counseling.org.